I finished another Space Marine as part of my first Tray. This one is another model that I got stuck on for years – a Techmarine of the Dark Angels that I started on ….well, it was a long time ago. Now I’m not entirely one for the colour-coding of Marine Specialist Officers. Well, I’m good with Chaplains having black armour, and Apothecaries being (mostly) white, but after that it gets hazy. I’m ok with some of my Techmarines being Red, because Adeptus Mechanicus, but sometimes a metallic on the red spectrum just feels better to me. In this case a deep slightly-coppery brown for the Dark Angels just feels good against the green armour of the Chapter. (And just forget about blue armour for Librarians!) 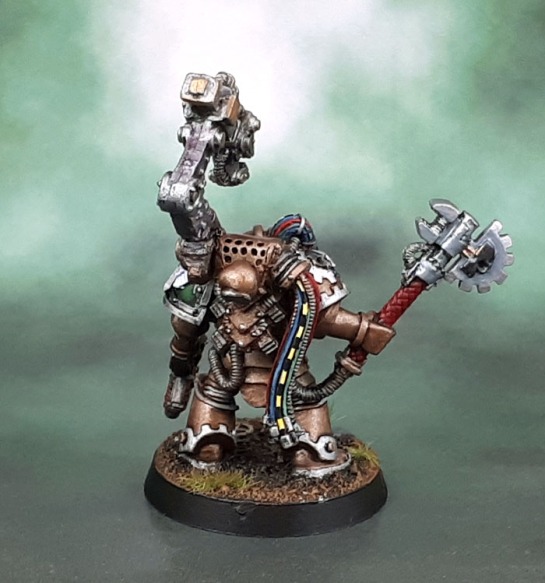 The main thing that made this model take so long to complete was simply the sheer number of tiny little fiddly details. They weren’t even hard to paint, but they were mentally difficult to do. This is why the Tray concept is working for me right now. After smashing through all of the easy winds, I’m stuck with these harder models to go, and just have to suck it up amd make myself do them. I’m struggling on a pair of Dark Elves right now that I’m really not enjoying much, but I am getting through the work on them – which isn’t something I could have said before, as they just sat on the desk, ignored for years. 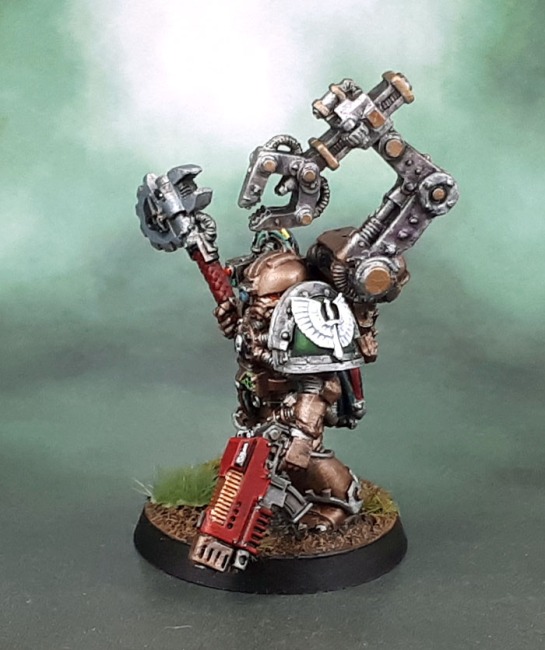 He’s armed with a combi-plasma, that seemed a good choice for him when I began working on him again early in 8th edition. Dunno how well it’ll fare in 9th, but bad luck. The final detail to complete him was a resin Dark Angels Legion shoulder pad from Forge World. The extra blinginess really works on models like this who are a step or five above the standard marines.

Group shots are always a nice way to finish these posts. They look good, and they also provide some visual reference and context for the readers who aren’t especially familiar with the faction or lore. And yeah, they look good!