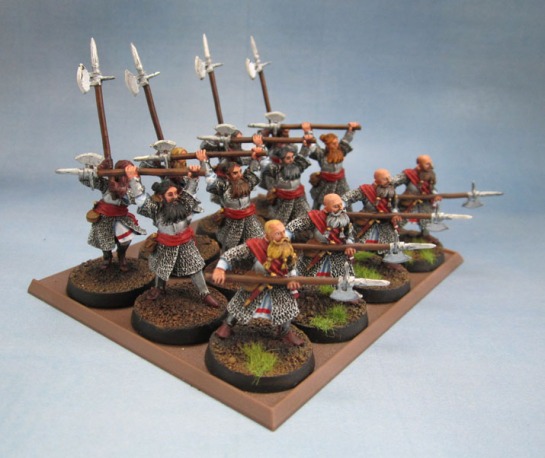 Axemen of Lossarnach looking like they’re preparing to receive a charge.

Another unit I’ve just finished, these guys were supposed to be one of those projects that takes a week, at the most. That of course was sometime between 6 months and a year ago. I honestly can’t recall since they’ve basically been a half-finished fixture of my painting table for a long time now. One of the big hold-ups that became a mental block (and then a wall) was my plan to convert one of their number into a Standard bearer for Kings of War. It took long enough to settle on a colour scheme for the unit – I went with red to get a look that is distinctive from the Warriors of Minas Tirith, especially as I find the stock GW scheme rather boring, even if it does fit in well with the WoMT.

I chose Red for two reasons – since the unit is considered an Elite unit in the GW SBG (despite the background talking of the men of Lossarnach being farmers and such) – and obviously these guys aren’t dressed as a levy of farmers, in their fine plate over the chain. The second is because I’m reserving Blue for the substantial number of Dol Amroth guys I’ll have when the army is finished, and Green for the small “Arnor” contingent, who will either be renamed for another of the Third Age Fiefdoms when not used in scenario play, or will be a “made up” unit of WoMT guard that represents their former kinsmen by wearing their traditional uniform. I might do something in Yellow/Mustard, but I’m not really a fan of that colour as a unit colour on models for whatever reason. It works for me more as an accent. So while I’ve been reliably informed this week by someone who has a pretty thorough knowledge of Tolkien that red probably wouldn’t have been used by Gondorians, I’m going with a combination of artistic licence, the rule of cool (I think they look good) and the fact that they were already painted(!)

The Second Rank. Are these guys starting to look like some kind of dance party?

I did briefly consider using some form of Tartan for the sashes on these guys, but with the Clansmen of Lamedor also in my painting queue, I decided that I’ve already got enough figures to make me sick of painting Tartan without starting here. Now take a good look at the next picture.

Did you look? The red line on the under-surcoat of the leftmost guy being thicker than the others really does bother me for some reason. Did you even notice it?

Anyway, with the upcoming KoW rules having done away with Standards and Musicians in units as things that have their own rules (since in 1E they were overpriced and pretty much just cancelled each other out) and now just going with “model them however you like”, It helped to motivate me to just get these guys off the paint desk and onto the gaming table. I might do a standard bearer for them sometime down the line, but it’s not a priority for the moment. 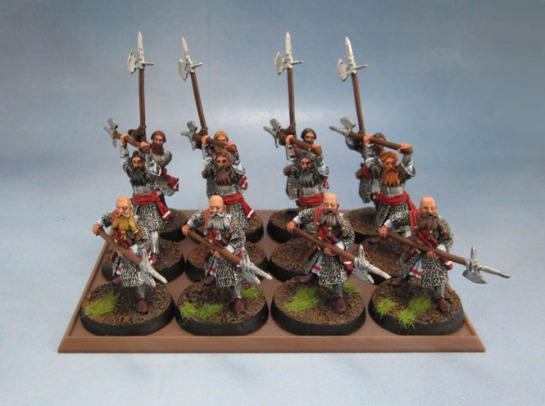 The Men of Lossarnach pose from the front. Spiky!

Oh, and the reason that the second and third ranks don’t have any static flock/grass on their bases is simple. I ran out of Matt Varnish, so they’ve got a coat of satin for the time being while I wait for a couple of new cans of anti-shine I ordered to come in. The front rank was finished first, and got some of the Matt before it expired.

I’ll try to get a whole-army shot featuring the Gondor units I’ve shown off so far sometime soon. I’m working on some unit leaders for the WoMT Spear and Bowmen that I’m really struggling to get done, and I really want to get those finished first, so hopefully we’ll have the army shots soon.

The opposite flank of the Axemen.

3 thoughts on “Troops of Gondor: Axemen of Lossarnach”