Recently I completed and showed off the barricades from the Sedition Wars Kickstarter’s Terrain Set. Today I have some more scatter terrain to share – specifically the crates. 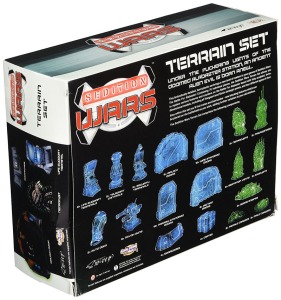 Not my work, but the work that inspired these getting painted after all this time. Clicky the pic to go to Agis’ site for lots more Imperial Assault goodness.

Once again, I’ll show the pic and link to the post that inspired me to dig them out and get them done – from Agis Neugebauer’s blog. I liked the weathering that he put into the crates, and also liked the contrast created via the red straps. He did use transfers to define them with Imperial cogs, and once again I decided to skip any markings that would tie them to any one universe, so they can be used in anything from “movie-style” Bolt Action WWII (when we don’t go to great pains to ensure historical accuracy of the design of all the crates left around that are being used as cover, through moderns, Star Wars (we can see how well they work above), near-future, post-apocalyptic right through to the 41st Millennium, where mundane things still often look strangely familiar… 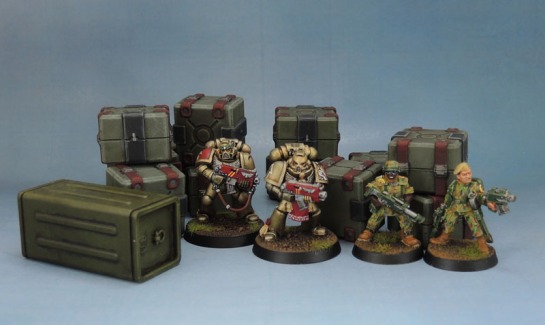 As can be seen, I gave them a light weathering, though not to the level of detail or care that Agis did on his. As far as scatter terrain goes, they’re really just more of the same sort of stuff I usually churn out at the level I’m happy to go with, generally. Not superbly exciting by any means, but additional, solid looking stuff that looks better than simply a spray and wash, a bit of extra weathering, though not nearly to the effort put in by people like D&B in his diorama-level pieces. Oh, I also found and finished one more of those U.S. DUST Tactics Supply Drop Crates, so it gets a guest appearance in this photo.

And finally, some “in action” type shots alongside some of the other appropriate scatter terrain I’ve finished in roughly the last year. DUST Tactics Supply Drop Boxes, DUST Tactics Dragon’s Teeth and Confrontation Walls, and the very recent Sedition Wars Terrain Set Barricades. There’s not a lot of height variation, nor any foliage, but just these bits of scatter make a passable battle site for a small combat patrol sized skirmish.