Here’s something assembled last month but painting completed this month. I know, I’m overdue on the Assembly April round-up – both my own and the community one. Unfortunately I have a slightly messed up knee and foot at the moment so my mobility isn’t great (went for an ultrasound this morning – followup next Monday) and so – yeah – some of these posts are going to be out of “proper” sequence while I get the photographs sorted out – including taking the bloody things, as I wanted to try something new for them. Oh, and I’ve …misplaced a sprue that I wanted to include in one of the posts.

In short: Sorry the Assembly April posts are late. Yes, they’re still coming. And in the meantime I’ll be posting whatever I can, so as not to have a month’s worth of backlog as stuff gets completed.

Once again, we’ve got some Shadows of Brimstone models, selected for the same simple-assembly, simple paint as the previous few. Once again I’m only figuring out how this stuff actually goes together with the other items from the giant box of seemingly-random shrink-wrapped plastic baggies as I type this and work out what the fricking things are called, and which expansion they’re from. So it turns out that these are from the Derelict Ship expansion. 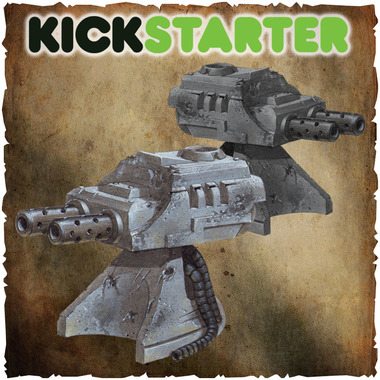 I considered painting them in silver-greys because spaceship, but again – I like generic. Besides, they’re a pretty odd design. What looks like an energy cable, yet the weapon has what looks entirely like the gun barrel shrouds that you’d see on a machinegun. And some odd-looking power pack and vent-type stuff on the sides and rear. So I’m going to go with yet another miniature model weapon system designed by someone with no real understanding of firearms or weapons.

So I just went for a green that would work okay with the Sedition Wars Barricades and Crates I painted last year. Didn’t need to be a perfect match – the models will look fine for the boardgame, and outside of that, this stuff is just generic scenery for the most part. I did make a Derelict Spaceship allowance, though – I went with grey (dirty grey, because derelict) bases and avoided the sandy, weatherbeaten look that the other terrain pieces have. Since the things have power cables going into the floor, I felt they needed some sort of base rather than to go unbased.

I’ll have something else tomorrow.