Remember Sedition Wars and it’s incredibly-successful Kickstarter? Of course you don’t. That’s because you either never heard of it, or the complete abortion of a game and fulfilment means you’ve blocked it from your memory like a terrible life experience, which it very much was. I was one of the ones taken in by a love and respect of Mike McVey going back decades to my youth and being foolish enough to believe the h̶y̶p̶e̶ lies of the campaign put on by Studio McVey and CMON to the tune of quite a few hundred dollars for my multiple pledges. Anyway, this post isn’t to bitch about the pile of money I flushed down the toilet in a mess of warped boards, terrible unplaytested rules and nicely sculpted but terribly cast restic models.

It’s about the one bright spot of the entire project (aside from the textured bases, I guess). The Terrain Set. More specifically, for this post, the barricades. I’ve been buying a bit of stuff for FFG’s various Star Wars games in the past 6 months or so, and part of that has naturally involved looking at pictures of stuff.

Not my work, but the work that inspired these getting painted after all this time. Clicky the pic to go to Agis’ site for lots more Imperial Assault goodness.

While doing so, I came across some pics on Agis Neugebauer’s blog. Now, he’s a poster over on Dakka, and I’m somewhat familiar with his work posted there, but I hadn’t seen his Star Wars Imperial Assault stuff before. Lots of great stuff there, including an Oskara conversion that I will totally be ripping off, but Agis’ also has a bunch of the Sedition Wars stuff painted up, and looking pretty bloody sweet. This triggered the “Hey, I’ve got those somewhere!” reaction, and off I went to find the crates, and while doing so, also grabbed out the barricades.

The barricades got finished first. Sprayed a custom green based on Vallejo’s 890 Reflective Green, then oversprayed with Plastic Soldier Company’s German Field Grey (Don’t buy their spray cans – they leak!). I then added the Lambdas, taken from a Warlord Games decal sheet (I would have preferred some white outline tank numbers from the WLG German Turret sheet, but I didn’t have any, and Lambdas are totally a thing in modern military markings and so in my mind help these pieces fit anything from near-future to 40k. I then drybrushed the barricades with Army Painter’s Army Green, and then Vallejo Bonewhite on the extremes. Some foam-weathering with Vallejo Metal Black, Vallejo Plate Mail Metal coloured primer and Vallejo Scorched Brown. Followed up with a spray of Plastic Soldier Company’s Dirt Brown Weathering Spray (they leak, FFS!), wiped down with a damp cloth, and finally a quick go-over with some of the foam-weathering, and they were ready for a heavy spray of gloss polyurethane varnish for protection, and then the good old Testor’s Dullcote to make them look good.

I also wanted to avoid any overtly-distinguishing iconography that would tie them too closely to any particular universe. So this meant no Imperial Aquilas or Imperial Cogs, and the dirty weathered look fits pretty well with just about anything, except maybe an especially-shiny game of Infinity. I can’t see pre-fab barriers getting carefully cleaned before being loaded into a transport between deployments, after all.

I have 12 barricades in total and I think they came up very nicely, but I’m also quite aware that looking at the individual weathering patterns on each of them isn’t exactly enthralling blog content, so here are some more posed shots with a few of my Imperial Guardsmen from the Terror Australis Regiment providing scale. Also, a sneak preview of my next mat review… 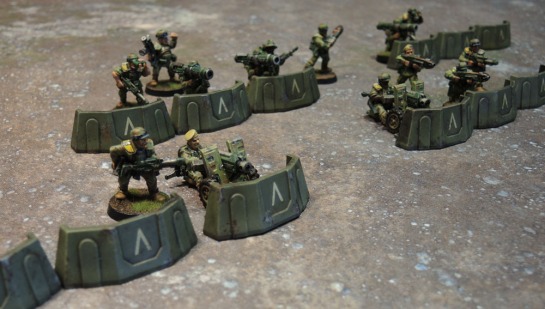 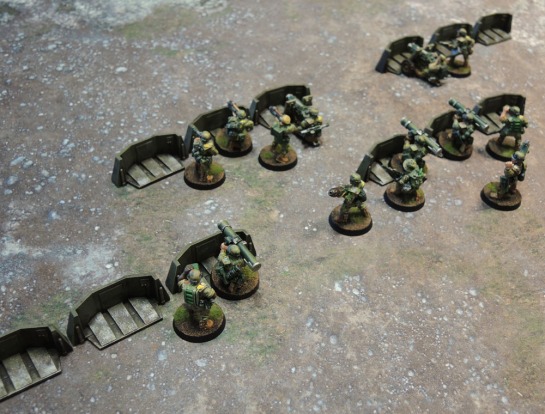