Recently, at the end of 2016 I placed an order for three gaming mats from Urbanmatz, based in the Czech Republic. There was a delay on one of the mats I ordered, as it was out of stock for a few weeks, though Martin was kind enough to offer me a freebie Snow Territory mat, which he explained had some yellowed stain marks on it. I gladly accepted the offer, and am reviewing the mat now, with the noted discolouration noted and allowed for. I recently reviewed their 6’x3′ Space Mat along with the Fantasy Flight 3’x’3′ X-Wing Starfield Mat.

Once again, the Urbanmatz mat is on neoprene (mouse pad material) and is quite nice. I wasn’t sure what to expect when it was offered, and while I was secretly hoping for a 6×4, was expecting a 4×4, not wanting to get my hopes up – but it turned out that it was a full-sized 6×4 mat.

Now I don’t have any models at all based for a snow environment, and even my thoughts around (eventually) playing Frostgrave involved basically ignoring the cold-weather setting but my initial thoughts when it was offered was actually to use it as a second mat for X-Wing, especially given the precedent from the recent films for atmospheric fighter battles.

Unlike some other Snow/Arctic mats I’ve browsed recently, the details in the Urbanmatz offering are quite subtle and non-specific, even being pretty scale-agnostic. Just offering a hint of something buried below the snow, but subtle enough that the mat could also be used as a cloudscape if that was something needed for a game. I’d take some comparison pictures showing the textures with 15mm armour followed by 28mm infantry if I had anything painted appropriately. 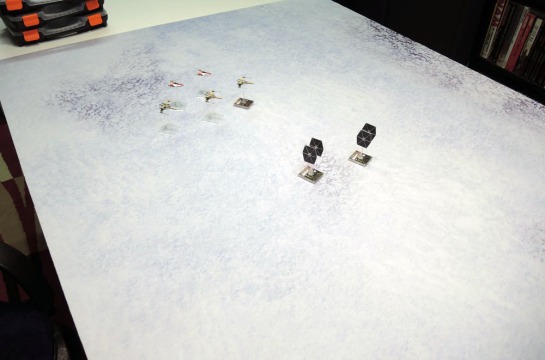 I did spend the better part of an afternoon with Marouda setting up and laying out figures to see how it all would look. First up were a couple of flights of X-Wing ships. 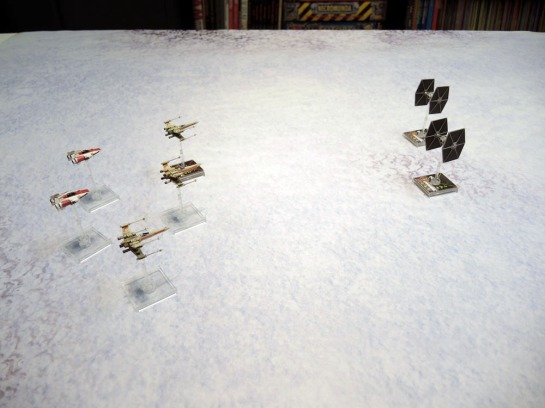 I honestly think it looks a treat for X-Wing and gives a nice unique look to the (pretend) battle – and should do so when we actually do play X-Wing on it.

Here’s a close-up of some of the discolouration on the mat. I was expecting it to be far worse, potentially in large yellow piss-patches in the middle of the mat but the issues are limited to a few places around the edge. While I can fully understand why Urbanmatz are unable to sell these, they’re minor enough for me to be able to ignore, especially given that the mat was a freebie. 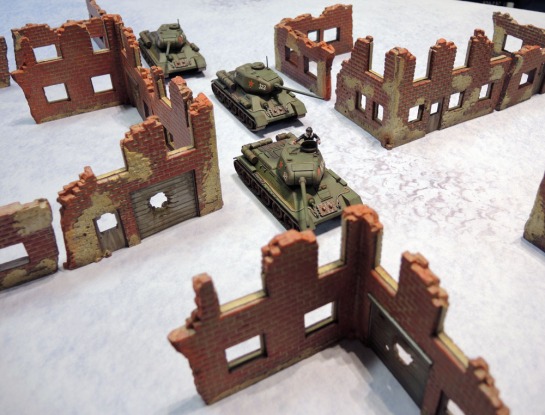 Time for some 28mm models, then. As mentioned before, I lack enough proper painted WW2 to really do much, and I’m completely lacking in snow-themed terrain, so I laid down some old, old Armorcast ruined building corners and my platoon of painted Warlord T-34/85 tanks. The tanks looked alright, though obviously whitewashed would have fit in more effectively.

The buildings, left unbased as they are is usually a positive on darker surfaces as it allows for much more modularity, but on the Snowy Terrain mat they do kinda stand out too starkly. Clearly, if I want to do much with this mat, I should sort out some snow-covered hills and perhaps a few copses of snow-tipped trees. Frozen lake? Snow-covered cabin? Grimdork from Dakka did a whole little snow-themed table recently, and I do have a jar of Jo Sonja’s texture paste around here somewhere…

The buildings could probably work reasonably well on the Snowy mat if I were to make some squares of “internal damaged building” to lay in the middle of them. Or maybe even some squares of appropriate-looking linoleoum cut with slightly uneven edges?

Next up was to lay some more dense scenery onto the mat and see how it looked. First up we went for a kind of Fantasy layout, a pretend-game of Sorta-Frostgrave, to see how it all looks. More specifically to see how my existing terrain worked with the Snow Territory Mat.

And… it actually looked decent. To me at least. The dark, scorched brown looking bases on both the models and some of the terrain obviously contrast quite starkly with the Snow Territory mat, but it kinda works for me. Obviously snow on bases would make everything tie in much more effectively, but it’s far from awful. 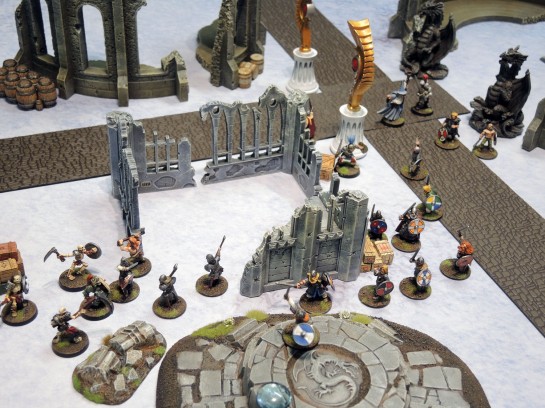 I hadn’t expected it to work this well, but I found it quite reasonable. Far from perfect, but very workable. 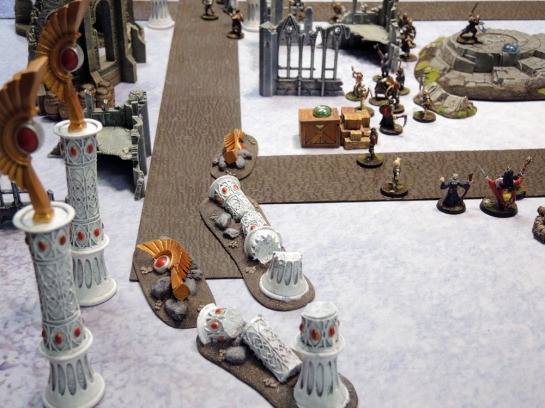 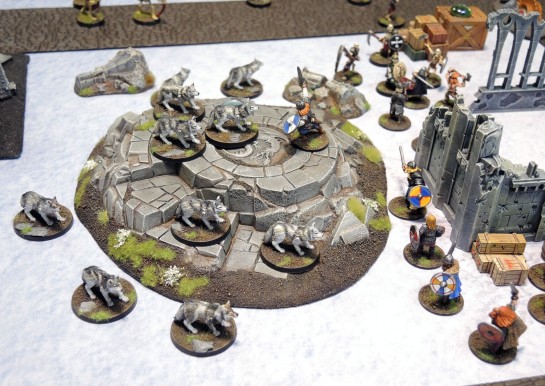 Next up I added my Conan Wolves into the fray. Frostgrave has random encounters. Probably not 10 wolves at a time, but whatevs. This is for photos.

So yeah. Not too bad at all. Next up was to swap some of the fantasy terrain out and do the same with some 40k models and terrain. 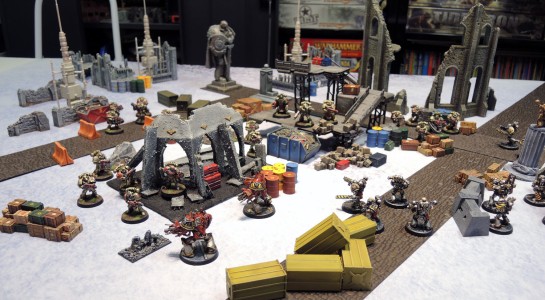 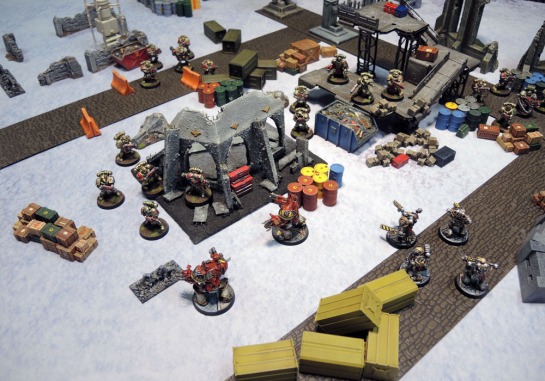 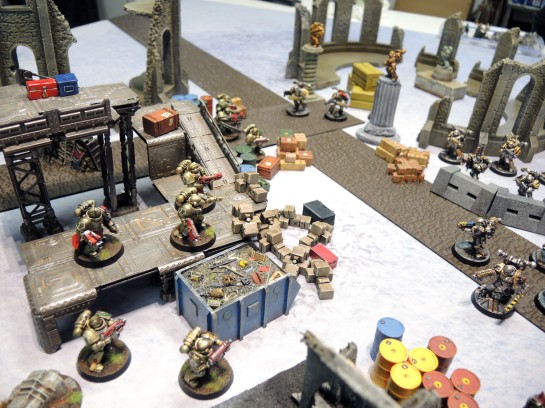 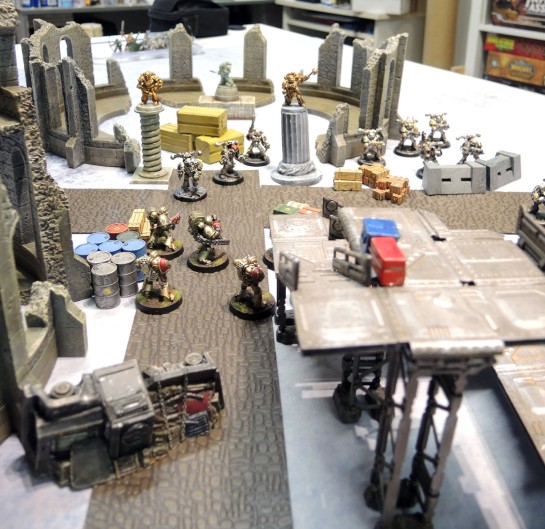 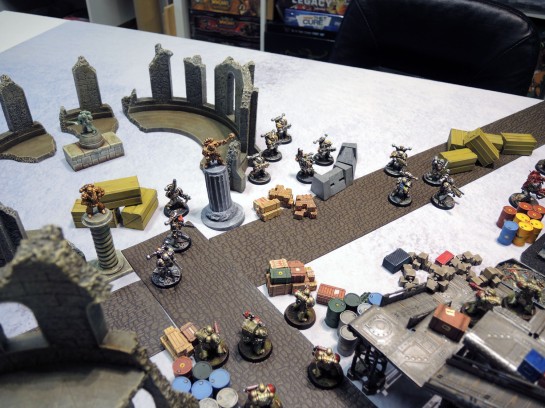 Yeah, that’s a lot of 40k photos. Basically, I took a ton photos and used a small proportion of them above. I guess the point of them all is to give a good “feel” of how the mat works in a smallish 40k game with a pile of scatter terrain on it. I wasn’t hopeful when it came to using it for 40k, but as with the “Frostgrave” game above, I’m pleasantly surprised with how well it works. 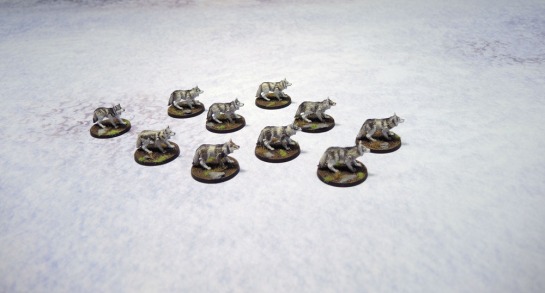 I thought I’d see how the wolves I painted recently look on the mat without vikings and scenery in the way as well, especially given their snow-grey coats. The answer: pretty decent.

As does their larger cousin in (sorta) 28mm scale from the Hasbro/WotC Star Wars Miniatures game.

Leading to potential use next time we go to a snow planet in the Star Wars Edge of the Empire RPG (The PC’s minis are on the far right).

I evidently only have 6 Snowtroopers. How embarassing! I also couldn’t find my AT-STs.

Bringing us full circle with some air combat, I got out some Axis & Allies Angels 20 planes to see how it looked.

Once again, I feel that it looks fine – Great even for air combat battles. I got out some Soviet and Luftwaffe planes for these pics, but it would work just as well for Western Europe 1945 or any other era’s dogfights above the snow. I had a feeling that it’d look good after seeing the X-Wing ships on it, but I wanted to put the WW2 fighters on it and see for myself. 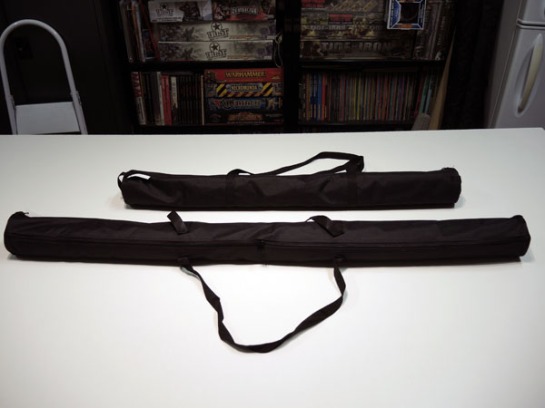 Once again, the bag shots. The 6×4 bag comes with a carry bag that’s noticeably larger than the 6×3 (above in the shot).

Verdict: I’m very pleasantly surprised with the snow mat. I have to admit, it’s not something I’d have ever really considered purchasing, and getting it for free is the only reason I own it. Having it in hand and having had a significant play around with my models on it along with the camera, I can really appreciate it now – especially given the versatility that I managed to work out of it. It’s perhaps not the very best design out there if you only want to play Frostgrave, but I personally really appreciate the fact that it’s very scale-agnostic and works for games and scales from X-Wing to WW2 Dogfights to the more typical 40k/Frostgrave/etc. Clearly it’d work just as well for SAGA, WHFB, Kings of War, Bolt Action, Flames of War and pretty much anything in pretty much any scale needing a winter snow theme, given some complimentary scenery (which I mostly lack).

And to reiterate – while I received this mat for free, there was no request for, no offer nor any implication of Quid Pro Quo in exchange for it. It was kindly offered (I’d guess because I’d already bought 3 and 2 of them were OOS) and gladly accepted, without knowing the size or condition it would be in, given that they were upfront that it was marked. All of the photos were taken over a couple of sessions as I worked out how best I could make use of it myself, and all of the review text are my honest thoughts, feelings and reflections on the mat.