In the last couple of years under the direction of new CEO, Kevin Rountree, Games Workshop has seemingly remembered that it’s a games company. The results of that has been a flood of new boxed games, most of which have been for the dual purpose of bundling models – i.e: Discounting their overpriced models without actually, officially discounting and also to produce games, which are giving their rules writers some chops and experience in, you know, rules writing. Happily, many of these products are actually good games by all reports.

One of these games I’ve picked up is Gorechosen. The game where Khorne’s champions beat one another to death in an arena setting in a very-much-beer-and-pretzels style game that’s reminiscent of a WWE Royal Rumble kind of thing. Well, more like a Fatal Four-Way Elimination match to nitpick, but I digress. It’s quite a good, light, fast game. So for me it was a no-brainer to pick up since I only had one of the models included (via an eBay secondhand thing) and their individual prices are, frankly, horrific (remember, I’m an Aussie – so take your local prices and make them even worse!)

What sucks is that in several regions (including my own), the game appears to not only be sold out, but hit with the dreaded dual “No Longer Available” and “Sold Out Online” stamp, which is a real shame, but speaks as to the way GW is pumping out these games with a very limited and defined shelf life. It also means we’re up a certain creek if we need to replace any components due to loss or damage. Bah. If the game sounds interesting, I’d get thee to a demo game or pick it up while you can. I’m sure there should be copies of it for cheap on eBay with the models stripped out, and as you can see, those are easy to proxy in – so as I said – a worthwhile fun, simple game to add to the collection for a varied session. 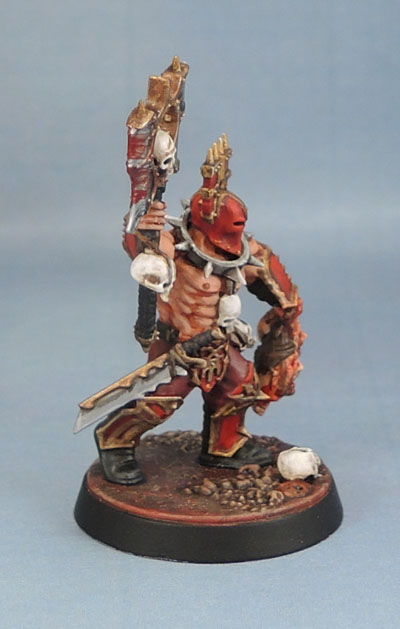 Anyway, the models are (too) sweet, and not having painted any Khorne in quite some time, I decided instead of getting right into them, I’d choose a few other models as proxies, that while still looking impressive, aren’t quite as expensive or involved as the official models. That way I’d have some things to play the game with while getting my Khorne Mojo going again – and then I can paint the proper models. In the meantime, this guy in WIP form, the Champion of Khorne, Champion of Nurgle, and Khorngor Champion (and a couple of others) have been getting some playtime in. 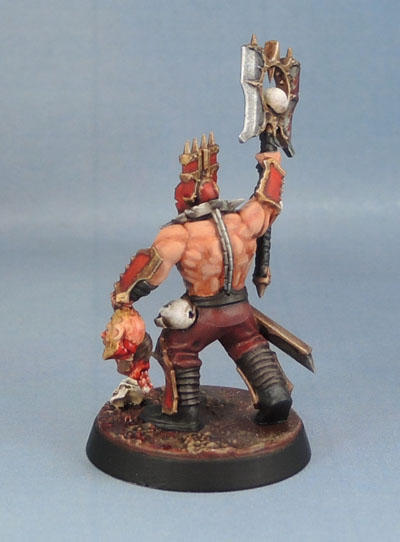 Colour scheme is pretty close to the “official” one, which in turn is pretty much Khorne-standard as established over the last 30 years. When I paint more of these guys and turn them into units for AoS/KoW/etc I’ll probably start to vary them more into something approaching different “uniform” schemes and effects (lacquered armour, etc) for every 8 or 16 of them. Without being too uniform of course, because chaos. I’ve added the little skull to the base not only as an aesthetic choice, but as a “front” marker. Miniatures (and GW’s ones in particular) often seem to have their bodies facing one direction while their heads face another – which is fine – but Gorechosen is a game where facing is a thing, so I’m using skulls to mark the “front” of the models that will be used in the game. The rest of the base is painted in keeping with the arena floor used in the game.