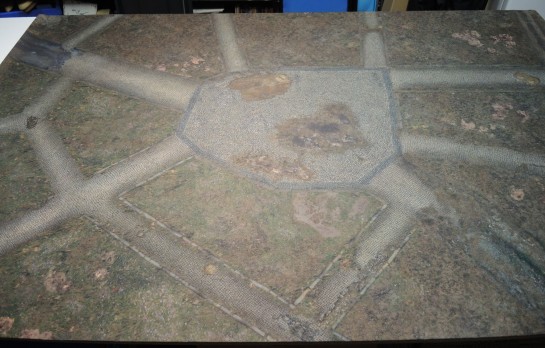 Here’s the last of the first batch of my gaming mat reviews of Urbanmatz‘ products from the Czech Republic. The Dirty Roads 6’x4′.

I’ve got a bunch of Deep Cut Studios and Gamemat.eu products that I’ve also purchased that I will be photographing and writing reviews for shortly as well. But today we’re looking at the Dirty Roads.

Often when I buy something from a company, there’s a “key” item that acts as an anchor for other stuff you then add-on. In the case of my Urbanmatz order, it was this mat. After seeing several photographs of it online, I was sold. The overall colours and theme matches my bases once again, as the Urbanmatz Badlands mat did. 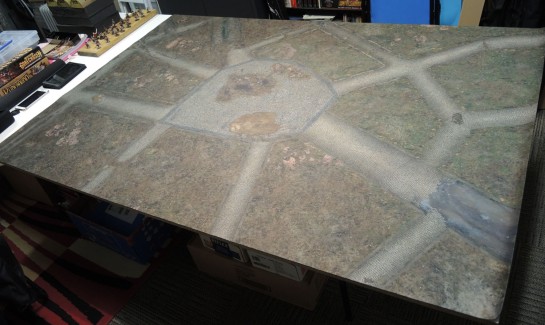 As with the other mats I’ve gotten from Urbanmatz, the design is printed onto neoprene (mouse pad material) and is once again quite nice. This time, the game I’m using to showcase the mat is an Age of Sigmar clash between Dwarves and Ogres, set in an unnamed Old World city (because I can use the ruleset without the background!) We were trying out the rules, so it’s an actual game rather than a mockup.

We made a bunch of mistakes, mostly due to not quite understanding all of the nuances and not reading warscrolls properly. I’ll put a lot of that down to the rules. Well, not the actual rules, but man-idiot Kirby’s insistence to the designers that everything fit on four pages in total. I’m all for streamlined rulesets, but 4 pages is a bit much (or not enough!) I’m looking forward to trying out 40k 8th with 12 pages of core rules.

One thing that can’t be argued is that we had a good looking game of toy soldiers. While I consider the quality of my models and terrain to be pretty solid, quite honestly the mat really does add to it. And no, I’m not paid to say this and didn’t get a discount – if I were offered one I’d certainly  accept it – as I accepted the stained Snow Territory 6’x4′ mat, but I’d also state it upfront in my reviews, as I did there. 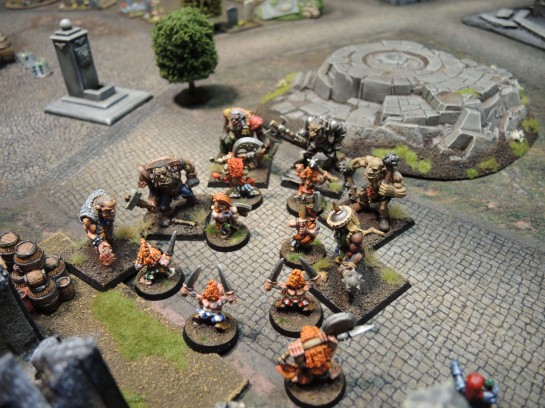 I didn’t set up a full 40k mock battle, nor any historical skirmish games because it literally takes hours to get out all of the stuff, set it up, photograph it and take it away for photos, but the actual AoS game being played on it shows it’s versatilty pretty well, along with those scale shots. I think this mat works very well for a variety of genres and a variety of scales. I could easily use this mat for 40k and it’s derivatives, Fantasy Battles/9th Age/Kings of War with fewer buildings, Age of Sigmar and other more densely built up fantasy skirmish like Mordheim and Frostgrave (if you play outside of the snow!) or Malifaux (in a sectioned-off area, or the smaller versions). It also works across period and scale quite nicely, as demonstrated by the below set of photos, so 20mm games such as Flames of War/Team Yankee/Crossfire will work as well as Bolt Action or SAGA with Romans or SAGA with Crusaders.

Based on its similarity with the “Badlands” design and colouration for the non-road sections, I’ve also found that it works both with “forest” and “jungle” foliage when I was playing around with my scenery, so once again that’s a positive. 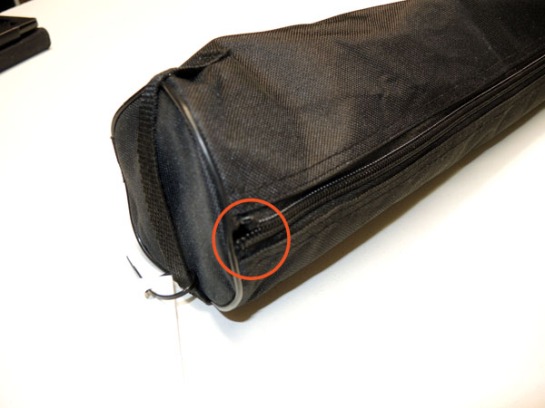 Once again, the mat came in it’s own, labelled bag at no additional cost, which is good. Until this one, I really liked these bags. Unfortunately, the zipper turned out to be faulty on me as I was putting the mat away after reviewing it. I’ve got it back in awkwardly by not drawing the zip to the end, which is awkward. Since this was only the third or forth time I’d had the thing out of its bag, I found this really disappointing. I’ll let them know about it, and update with their response.

Verdict: I’ve said this before, but this mat is very much what I wanted it to be. As I’ve mentioned, it was the “key” design that motivated me to buy this batch of mats from Urbanmatz, and I’m very happy with the final product, as I was with their service. I’m considering buying another batch of mats in the near future (another 4 or so). I figure that while I’ll have spent a fair bit on game mats in 2017, I’ll then be set for the rest of my life, assuming that the neoprene lasts!