Welcome to another “final models in the set” post, following up from completing my Marauder Slayers recently. This is the final post in the saga that has chronicled me working my way through the Vikings given to me by Cannon last year. I feel like if he hadn’t applied friendly pressure on me to take them, I wouldn’t have then felt so obliged to paint them, and they’d have instead ended up in my Lead Pile, with the best of intentions – alongside all of these 1980’s and 1990’s Warhammer/Oldhammer models I keep pulling out to paint. As it happens, painting them 2 or 3 at a time has been an enjoyable palette cleanser as I work my way through my many other projects, and now I have quite a nice looking little warband of Vikings all painted up (which I’ll sort out a group shot of, soon!) 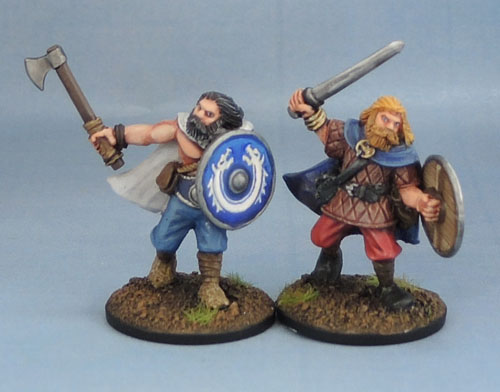 The first pair are from Wargames Foundry. I even managed to identify them. The swordman is “Bue the Pious“, who received a shield featuring a second knotted cross.

The second of these two, armed with an axe is officially “Valdemar Snorreson“, Viking Berserker Character – but when I saw the sculpt, I decided that the sculpt bore a striking (to me) resemblance to crazy-eyed WWE wrestler Luke Harper.

Given that his ring attire at the time was comprised of blue jeans and a (dirty) white singlet, I echoed these choices in his clothing. Marouda also pointed out to me that his girdle-belt looked like a wrestling championship belt, so I painted it in the colours of the WWE Smackdown Tag belt, which he sort-of held around that time under the Freebird rule with Bray Wyatt and Randy Orton…

Why yes, I have gotten back into Professional Wrestling in the last year or so. Thanks for asking. I know it’s not a mature, grown-up hobby like the SRS BZNSS of painting and playing with toy soldiers or video gaming, but I manage to make do… 😉 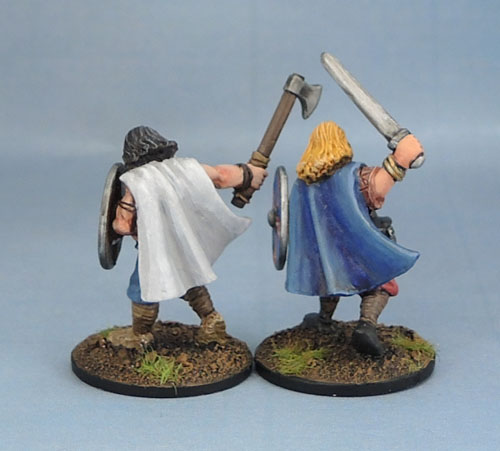 Cloaks are exciting, too!

I’m not sure of the origin(s?) of the second pair here. The mustachioed model has a age and authority to the sculpt that I felt needed to be complimented by appropriate hair and gear. Hence he’s greying, and his equipment features richer, brighter colours than I’ve tended to use with my vikings, especially for multiple pieces of gear. His left hand was a “lego” hand, and since he already has both a shortsword and dagger sheathed, I felt that giving him a daneaxe filled him out nicely, adding to both his authority and menace – as does his harsh, intent stare.

The blond of the pair has a sculpt that made me think the figure might originally be a Gaulish Celt or similar. While the sculpt could easily be another warchief, not every model can be the boss, so I painted him in much more muted colours so that he can fulfill the role of a veteran warrior.

No, really. Cloaks are exciting!

One thing I have attempted to do through this Viking project is to challenge myself to improve my freehand. I’ve been confident for a long time in doing things like script, tattoos, and “paintings” like skulls and whatnot, but patterns that often need to be more uniform, or repeated is something I’ve let fall by the wayside, especially since I want real uniformity in things like Space Marine and Imperial Guard insignia, and so it’s been many, many years since I freehanded Ultramarines’ inverted omegas on models on a regular basis. Obviously, not every viking features something like this, since I still want to have a lot of variety and individuality in the warband, but I’ve been pushing myself to try different designs on them. Sometimes it works out a little wonky, such as the knotwork on the cross above, and other times it works out quite pleasingly, as on the dragon above.

Here’s the group shot of this batch. I’d planned to also include the full group shot of all my vikings here and took some photos, but I then saw another pair of models that I’d missed for some reason, so I added them into the group and took some more photos and then packed up. When I got back inside the house, I found another one on my desk. At that point I gave up and decided the group shot could be its own post since it was cold, wet and dark by that point. 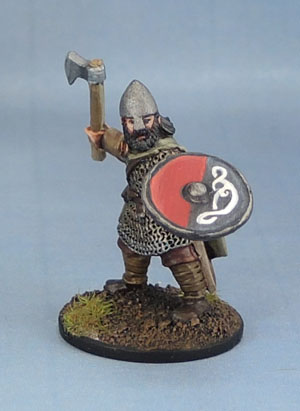 As a little bonus, I added some freehand knotwork to one of the viking axemen I painted awhile ago. I know bisected shields are fine, but it bothered me every time I looked at him, especially as my plan has always been to predominantly have nicer, freehand shields on my metals, while the plastics that I haven’t started get either transfers or more plain shields.

So this draws us to the conclusion of Cannon’s Vikings. No fear! Just as I have many more Dwarf Slayers lined up, I’ve got my own Wargames Foundry purchases to paint, including the ex-Citadel Perry miniatures, and of course, way too many plastics. The warband shall one day become an army…