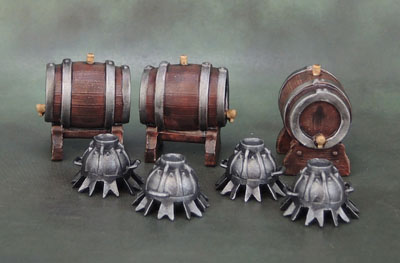 Today we have a transitional post between May and June’s finished models, dealing with two small sets of scatter terrain, neither of which really warrant their own post. Let’s face it, they barely justify the one between them except that I’m making a point to post up everything I finish this year.

The first bits are a few more of the Bombs from Citadel’s Lord of the Rings Uruk-Hai Siege Troops set. I painted four of these a year ago (very close to the day). Not sure where they are now. I’m sure they’re somewhere very safe. And now I have four more. Exciting!

The second models are a trio of barrel kegs from Wizkids that I picked up very recently when ordering some other stuff and needed a bit more product in order to qualify for free shipping. So I got these.

I mixed some browns for a dark-but rich, stained look to the wood. They should have use inside of any fantasy dungeon or tavern and in many a historical setting. Best used indoors, but I’m sure they’ll be fine if placed outdoors as well. In the end, they’re okay, I guess. They weren’t very good at all to paint, however.

The problem is here. They’re nicely-rendered 3d models – that have been turned into miniatures. They look nice and detailed in their rendered form on a computer screen. Unfortunately, all of those fine, subtle details just don’t come out when the things are produced at 28mm scale. The woodgrain on the sides disappears completely, and the space between the planks almost disappears as well. I have to say that as much as people like to shit on GW (often for any reason they can think of), one thing that can’t be faulted is their awareness of the scale these things are produced in, and the need for the detail to work in and for that scale rather than looking good on a 3D artist’s computer screen , blown up to 1000x the actual model size.

Anyway, they’re low-importance bits of scatter terrain. My four final completed models for May, and the first three for June.