I thought I’d share some more of my older paintjobs today and over the next while – only now “updated” in the past few weeks with new 32mm bases. Specifically, three of my old Rogue Trader Space Marine models painted as Legion of the Damned. As can be seen, these models are from the days before everything was covered in sculpted details, and ironically, before 90% of those details were skulls. Hence, all of the flames and skulls on this trip are entirely freehand. Oh, and I know that their flames “should” be yellow at the base and red at the ends, but on my models it depicts paint on armour, not actual flames (as sometimes retconned in Black Library). I don’t care what was written in an eBook or short story in 2015 or 2016, my guys have a direct lineage to White Dwarf 99.

The first model, on our left has 1987 on his tab, as well as “Medic”. It’s based off of “Brother Harris” from WD 99 in March ’88. The range in this particular advert are listed as having been sculpted by Michael and Alan Perry. Amusingly, Brother Harris in this particular advert is painted as a Legionnaire of the Damned, but I declined to do so myself as he had his helmet off. This model obviously predates the Medics that came later, as it completely lacks any medic gear or even an embossed caduceus on his pauldron, though interestingly there was a designated medic model (via sculpt, as opposed to the ones defined by paint that everyone just copied) from the very early RT01 Imperial Space Marines batch of sculpts. 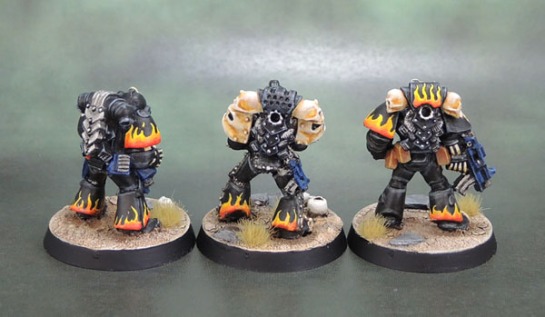 The central model of this trio is one of the initial range of Space Marine Chaplains, circa 1988/89. Three of the initial six Chaplains had what we know as the Crozius Arcanum, though the other three did not. One having a Bolter and (crazily thin) Power Sword, one with a Bolt Pistol and Chainsword, and this fellow, with what I presume was/is an early combi-weapon. Note the “gatling”-style barrels behind the “regular” bolter detail. His armament, early skull-helm and especially his nifty shoulderpads got this guy drafted into my Legion of the Damned, where he has served as the squad’s sergeant for many years.

Finally, the model on our right. He is listed as Brother A Skull in the advertisement for the RT01 range of Marines from White Dwarf 98 in September ’87, back when they still gave models interesting names. He’s also called “Brother Dixon” in the February 1988 RT01 Flyer, obviously names after Colin. I chose him to be a LotD figure because of his unique, skull-like helmet. Years after painting these guys, I came across the sculpted LotD backpacks from the Second Edition squad box, and so pried off several of the original backpacks that some of my LotD had, replacing them with the skull-sculpted versions.

Aside from the backpacks, Brother A Skull and the Chaplain’s old-school helms, and obviously the Chaplain’s sculpted shoulders, the rest of the skull, flame and bone detail on these guys is all freehand. Even today I’m particularly proud of the pauldron-skulls and the skull-helm that you can see here. And yes, I know that the colours in actual flame work the other way, but here it’s based on contrast and rule of cool. Some of the more recent writers and artists have taken things like the flame iconography way too literally.

7 thoughts on “Legion of the Damned #1: Rogue Trader-Era”