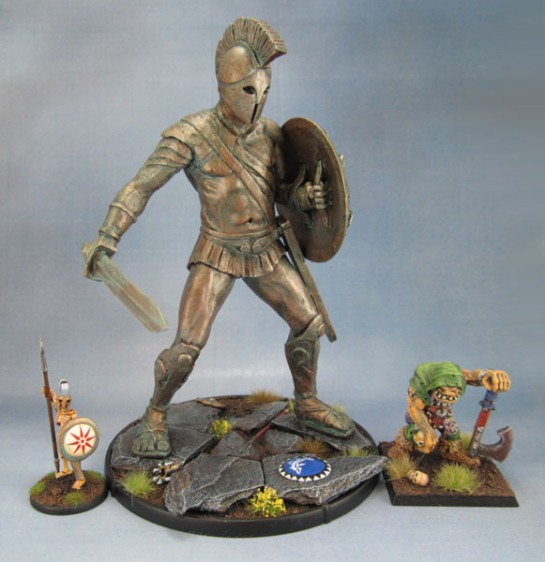 Back at the end of 2015, I’d been working hard for the previous few months on basically trying to finish off models that had been started whenever ago, with a focus mostly on Fantasy figures, and sub-focus on getting these figures into workable units for Kings of War. While this was rewarding in many ways – as getting stuff done always is – I had some time off coming up and wanted to do something more, something different, something significant in that time. Generally speaking, I turn out a lot of “regular infantry” models and a lot of scatter terrain with the odd larger piece of terrain. Something I’m not so good at is getting anything bigger than an Ogre done. I don’t get a lot of Dreadnoughts or Dragons done.

So the idea of “Painting December” was born, and I asked for suggestions, and then used those to help me put up a poll of MILPs (you figure it out) to help me decide, and the big bastard in the middle above was what I went with. Mierce Miniatures’ Talos.

I did manage to finish him in time, and following that, started on three(!?) more, managing to complete none of the three.

The Marauder Giant was one I’d really hoped to get done, but unfortunately complete indecision on how to paint his clothing froze him in place, where he’s been ever since. I don’t like the patchwork look on the box art, and decided to paint him in tartan, and in this case I felt that red tartan would look the best, his ginger hair created the potential problem of him being overly-red. Neither green nor blue (not blue-green) tartan especially appealed to me once I considered them more closely, with the result that he’s been literally laying on my painting desk gathering dust (and occasionally being dusted again) since December 2015.

I also started on Be’Lakor. First Daemon Prince in the various Warhammer Mythos. He got a bit further along, and I’ve made a few half-hearted attempts to complete him since – so he managed to finally get mounted on his base, (I didn’t have any official round 50mm bases at the time, so he got a rolled-edge one). Most recently I entered him in Dreadtober, but I’ve not managed to do much with the Dreads I put myself down to complete, and I’ve done nothing at all with Bel. (Work is again kicking my arse, plus Shadow of War is eating a lot of my relaxation time). 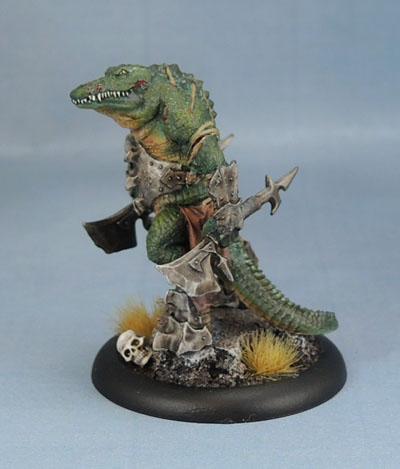 I also (secretly) started on Ashoka, from Hell Dorado. I thought it would be cool to have a special reveal after I finished Bel and the Giant. I didn’t finish him either, but finally made myself get him done earlier this year.

So now we’re at the end of 2017, and I’d hoped to do another Painting December – but it looks like I’ll be working right up to the wire of Christmas (last work day is 22nd December) – so I’ll have a couple of weeks in January, and so that will be a better time for me to do this. I’ll invite any readers of this blog – either in the WordPress form right here or over on Dakka – who want to participate to join in themselves. I might make a little banner or something.

So the object of Painting January is going to be the same as it was originally:

I thought it would be a nice thing to paint something new/different/interesting/cool.

Something that works as a centrepiece model of some kind. I also set myself the following additional stipulations – which I’m going to again follow:

If you’d like to play too, you can skip stipulations 1, 3 and 5, but bear in mind this isn’t about building models, it’s about painting them – and getting at least one model completed from start to finish, not including assembly. (Maybe we can do Building April or something later?)

My preliminary list to choose from for this one is:

I’ll get pics up later (probably), but they’re all easily googleable should anyone want to check them out in the meantime. I might also try to work on the Marauder Giant as a secondary/stretch goal, but getting something big and cool done from start to finish is going to be the main focus.