And yep, another three Orks today. I figured that I could have shown all six in one post on a 2-day turnaround, or just post them three at a time over two days. So I’m doing the latter to give them all a bit more space. Besides, they took me long enough to get finished, so I’m good with giving them a bit more individual showcase. It’s not like it’ll happen for these models again as any new posts with them will either be much larger group shots or battle reports, so I’ll give the hours of work these guys took their moment in the spotlight. 😛 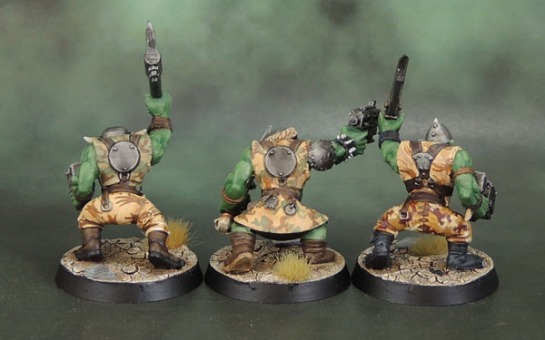 As with yesterday’s camo schemes, we’ve got British Desert DPM and three variations on that Yugoslav “puzzle” pattern, all with different palettes. The idea is that when these Orks are all mixed together, they’ll all be unique yet unified by their camo gear. Besides, even with Blood Axes, I can’t see Orks being better at wearing unified camo than, say Russian troops. 😉