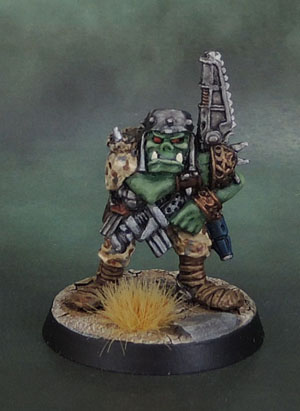 I know, I know. The title “discipline-master” makes it seem like this orc should be the one armed with the whip and not the other Ork I posted up. This guy, known as Thrugg Bullneck (thanks Alex – I couldn’t recall his name despite looking for it) is the commander model from the very first Space Ork boxed set (and the second 40k box set ever) RTB02 Space Ork Raiders. In (the original volume of) Chapter Approved: Book of the Astronomican, this model and the other like him were the example models for Discipline Master (Sub-Chief) who had Ork Hero level stats. While he’s not huge compared to modern Brian Nelson Orks, he stands high over the rest of the models from the Space Ork Raiders box. 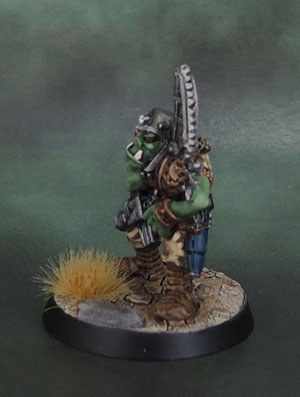 For his camo I’ve given him Desert Auscam, and attempted to give his gear some contrast to his skin by using reddish leather trim and brass/copper/bronze for his bling and scale armour – but without going all the way to actual red. Rather than going with the traditional old-school red for his plasma pistol, I went with a more muted dark turquiose. It still (sort of) stands out from the rest of his gear, but without being garish against his camo and overall more muted tones. 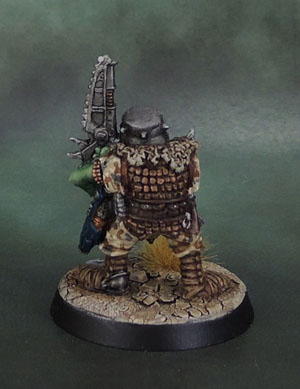 Looking at this model even then, but especially today the closed pose of it really stands out. Arms and weapons folded around the Ork’s torso, yet it still manages to look like a badass that you would not want to mess with. As with most Orks of the day, rather than boots, he’s got puttees wrapped around his feet from his toes almost to his knees. This was Kev Adams’ style on the fantasy orcs that he sculpted in those days, and something that directly carried over to almost all of the original Ork line. 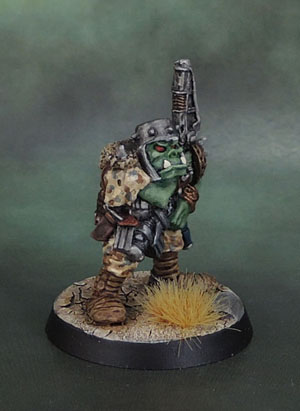 This particular model is one I’ve had for decades, since I was a young teen first discovering the original Rogue Trader. One of the first 40k models I ever collected. The rest of his original cohorts were sold off many years ago, but he was one I kept out of fondness. He’s been painted (in enamels) then stripped, then boxed, then bagged, then boxed again into storage. With a lot of years in each of those. After so many years, he’s back, rebased on a 32, and most importantly painted and ready for the table again! 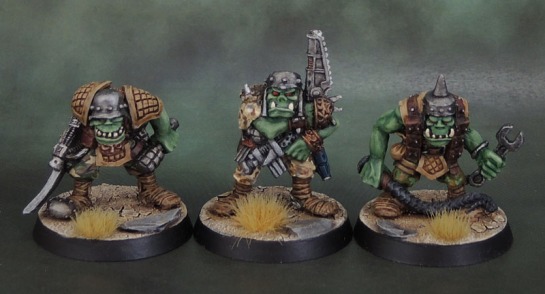 And for good measure, here’s the three old-school Rogue Trader Orks together. I hope to get some more of these guys done this year, but the painting queue is pretty full, so I’ll make myself finish more of the other Orks I started years ago before I begin any more old-school Orks from scratch!