This next pair of Plague Marine models hail from two years later than the previous batch, this time the models are from 1995. At this point they had been redesigned somewhat. Or perhaps tweaked is the more appropriate term. The helmets had been changed from the MKVII (Aquila) variant as GW started to back off slightly from the overly-aggressive retcon of all marine armour from MKVI to MKII. Their new helmets are a more unique style. The “gas mask” look was starting to creep in, influenced no doubt by the Pickelhaube-esque spikes on their helmets – which had also been toned down and were now more in tune with actual Pickelhaube spikes.

This pair are based on the same model. One that I’d painted previously, modelled doing the crotch chop (nWo, not DX) and the other, originally modelled in the pointing pose and part-painted by Matt F and acquired by me after he lost interest in a Plague Marine force, which sat in a case for 15 years before being repainted in the copper-and-black livery of these guys over the last month or so. 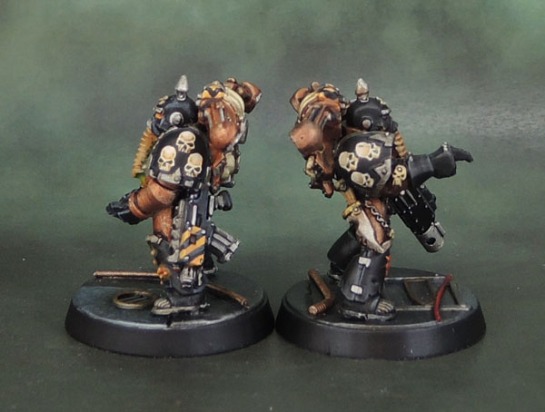 The trio of skulls on their pauldrons are of course reflective of Nurgle’s mark. The stowed bolter on the left-hand plague marine has been repainted from a metallic red, and I think looks much nicer now.

Their other shoulders have been updated, once again with “Iron Legion” Skull icons from Pop Goes the Monkey on Shapeways for the Iron Warriors army badge. I really do like those badges, and I think I’d best grab another set ASAP. These guys don’t get a IV Legion army badge, since they’re very likely later, post-heresy additions to the Iron Warriors.