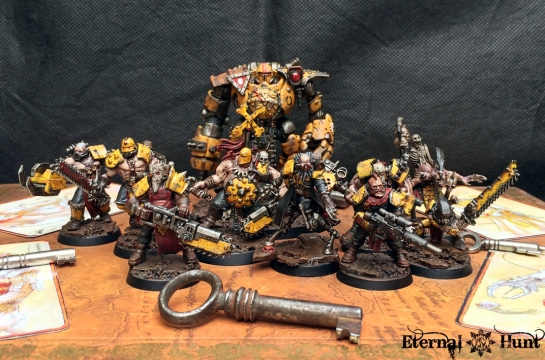 All I can say is that putting this post together has been a project in and of itself. I’m overwhelmed by how many people have taken up the challenge of getting a unit done for this month. I’m starting at the top of the pingbacks on the Challenge Post (at least initially) and working my way down. I’ll chase up stragglers later on.

So above we have The Road Crew by Krautscientist from the Eternal Hunt. Listening to Motörhead while viewing them is optional, but I’d personally encourage it. That’s one frighteningly feral-but-awesome looking bunch. 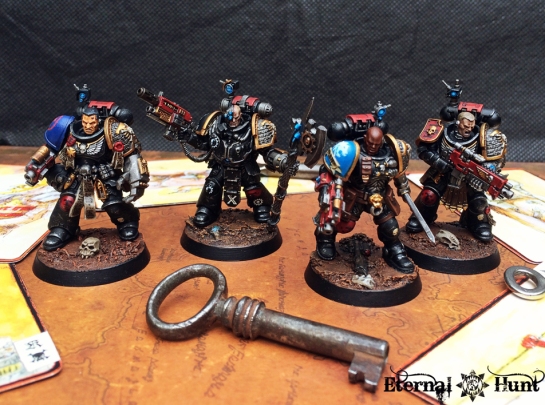 Krautscientist has also dropped in a second completed unit this month – Deathwatch Killteam Ulrach converted from Primaris Space Marines into truescale Inq28 models. Each model is a unique build that I’ll (hopefully) be taking inspiration from at some stage for my own models. 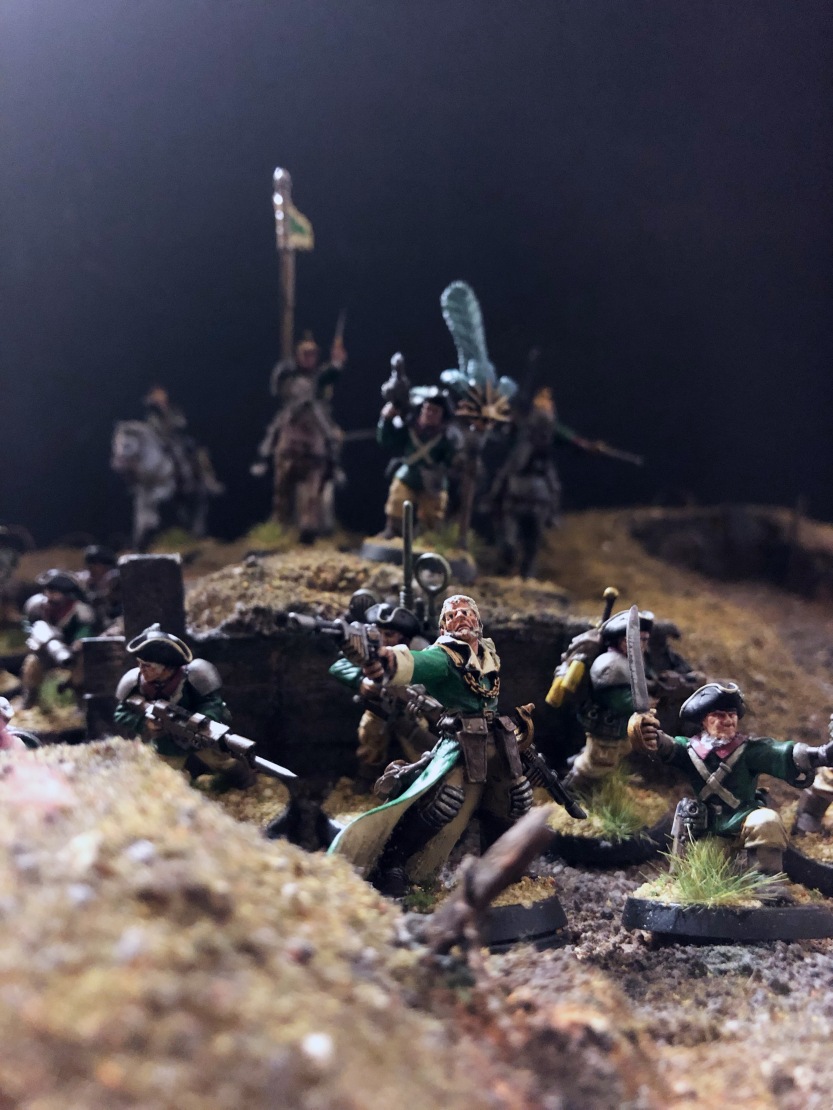 Next we have Imperial Rebel Ork’s Bannaroff Light Infantry: The Forlorn 13. There are a literal ton of photos of these guys over on IRO’s site, and I definitely recommend checking them out for a very cool unit mashup of 40k and the 17th Century. 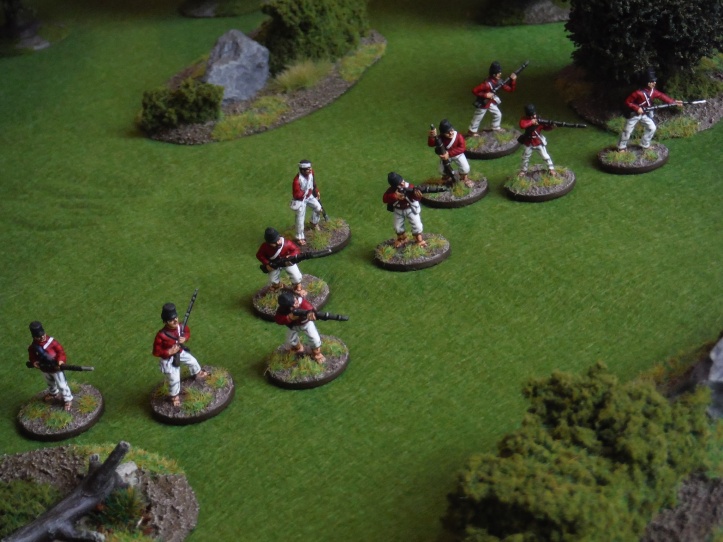 Just Needs Varnish has completed a fourth Paraguayan infantry battalion for his Paraguayan War project that he’s been working on for some time. I think it’s about time that he posts up a nicely updated group shot of both sides facing off. 😀

Wudugast from Convert or Die has had a productive month. First up he completed the Disposable Heroes, a rag-tag squad of Imperial Guardsmen that exist in-between 40k, Inq28, Necromunda (and probably soon, Kill Team and Rogue Trader!) 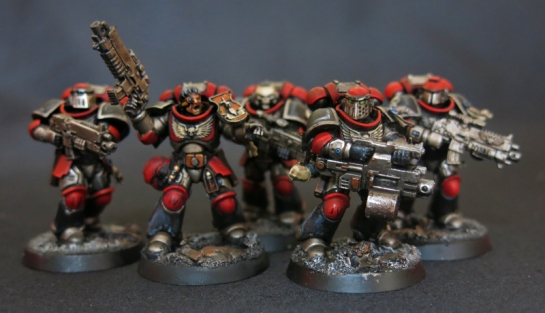 Secondly, Wudugast has converted and painted up a squad of Space Marines from his Knights Mortis Chapter, using Primaris models as their basis. I especially like how the paint scheme is both striking and battle-work at once. 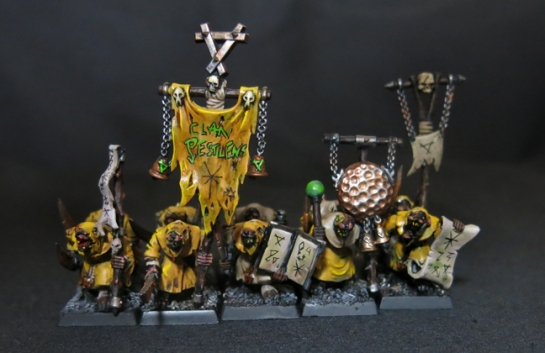 Finally, Wudugast completed a unit of Plague Monks for his ever-growing Skaven army. I also have to congratulate him on finishing his Skaven unit while I failed in completing my own Skaven unit rather miserably. 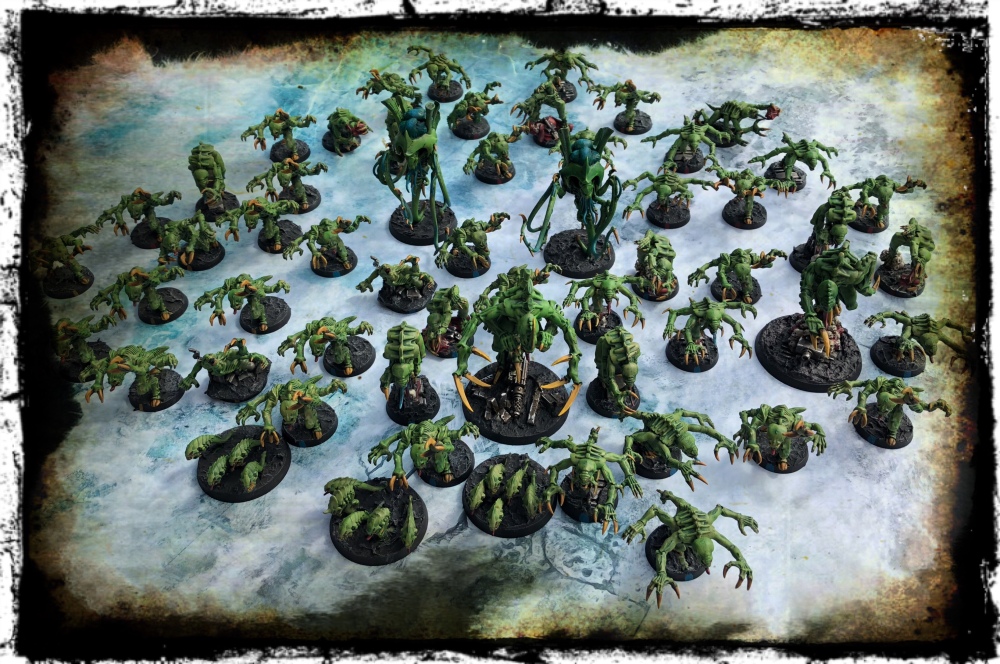 Thomas’ Brood of Genestealers (and some little – and big – friends)

Thomas of the High Times on the Eastern Fringe has gotten a whole Brood of Genestealers done this (last) month. There are a few actual Genestealer Broods in there, as well as Ripper Swarms and a pair each of Broodlords and Venomthropres to boot. That’s  ….a lot of melee attacks. 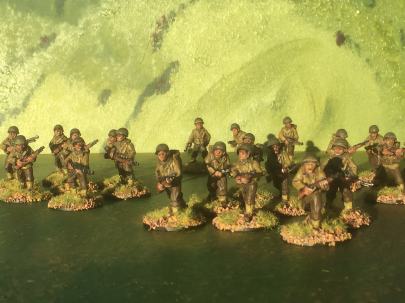 dave2718 from Faith and Steel completed 2 (or 3 – depends how you set them up) units of US WWII Infantry. I believe they’re on patrol in the late afternoon of a summer day. He’s teased some support options coming soon. I wonder if we’ll see some armour for The Jewel of July painting challenge? 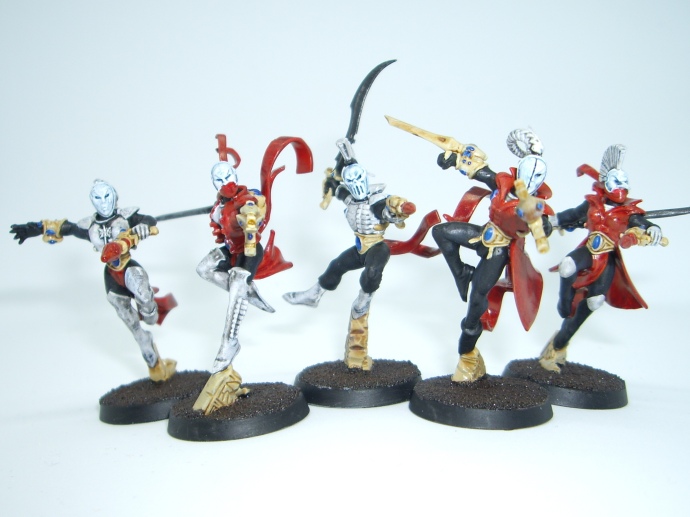 Argentbadger from (or who is?) The Bovine Overlord has painted up a Troupe of Harlequins. Those most slippery and perfidious of the Eldar race! I’m also rather embarrassed that Argent now has more than five times the number of painted Harlequins that I do! 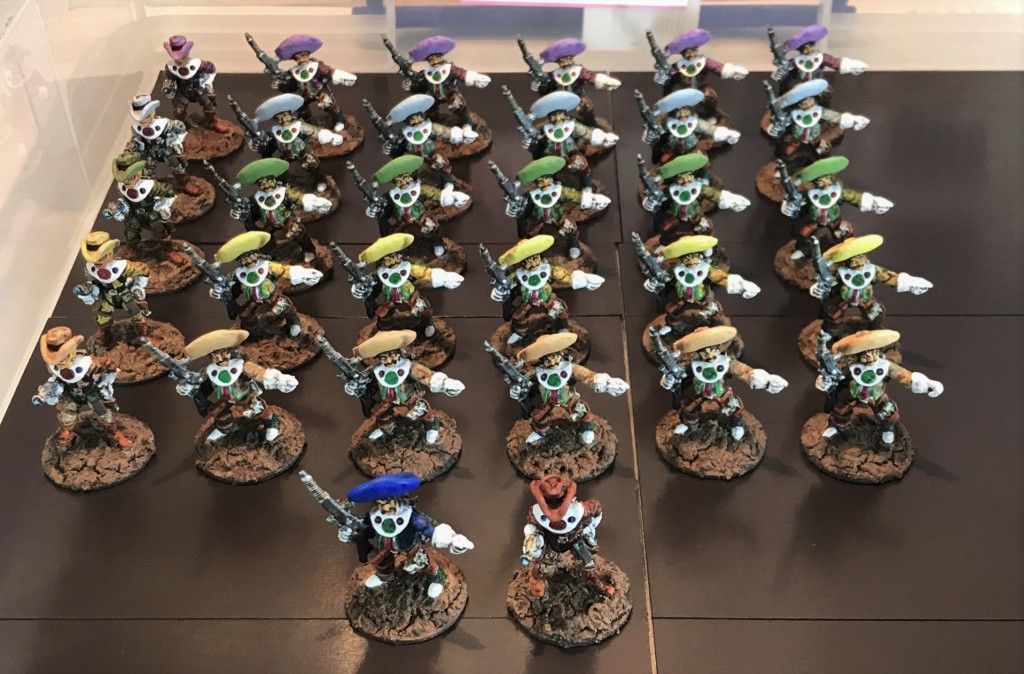 Mark A Morin has also had a busy month. Firstly he completed an entire platoon of Texican Space Rangers that originally date back to 1978! I’m pretty sure that either the platoon Sergeant or the Lieutenant is called “Maurice”. Or certainly should be. 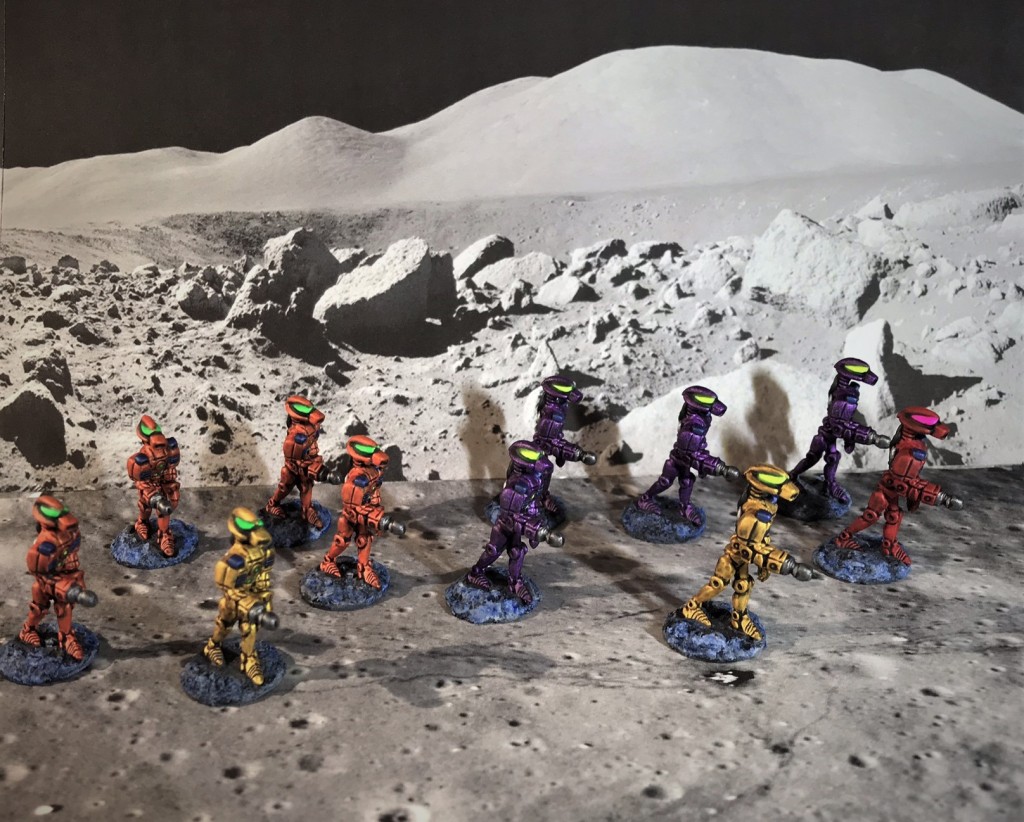 Mark’s second unit for the month was a Skittles-inspired set of Robot Peacekeepers from the Mega Miniatures range. They apparently want candy, and are willing to keep the peace all over you if you get in their way to the candy aisle. Don’t blame me – blame Tabitha! 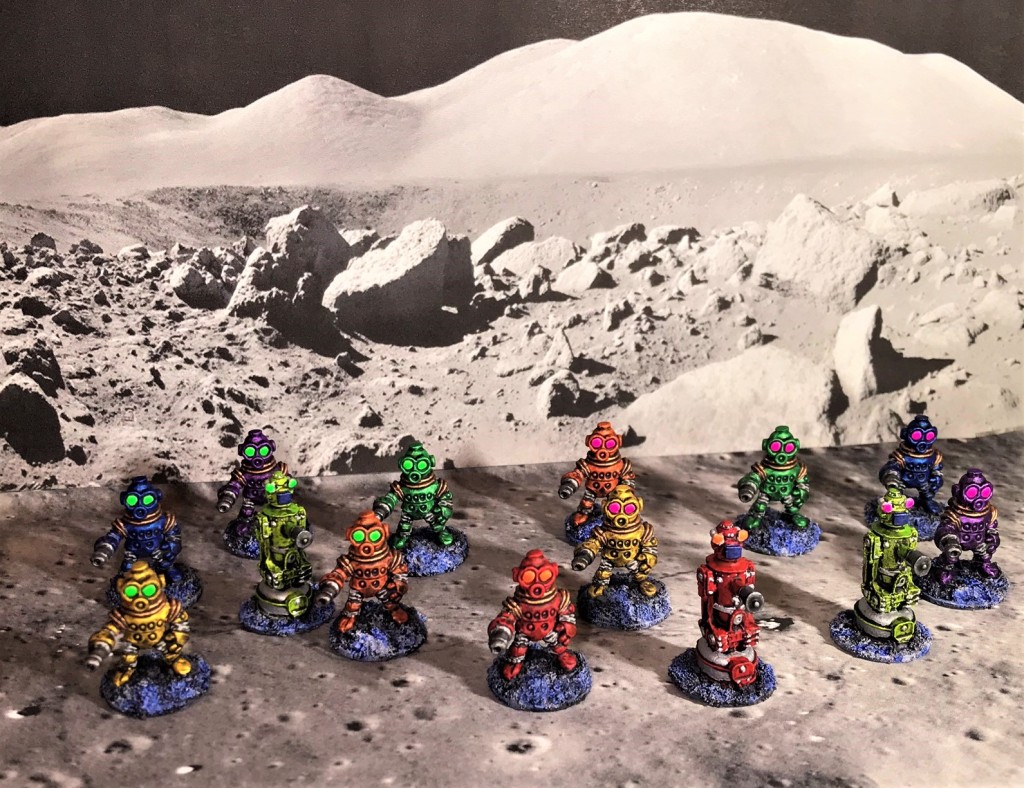 Mark wrapped up an overly-productive month with a Space Dwarf Assault Squad. (not Squats!) Once again proving that he’s not scared of a bit of colour, each of these Space Dwarves (and Agri-Bots) has an individual colour combo. 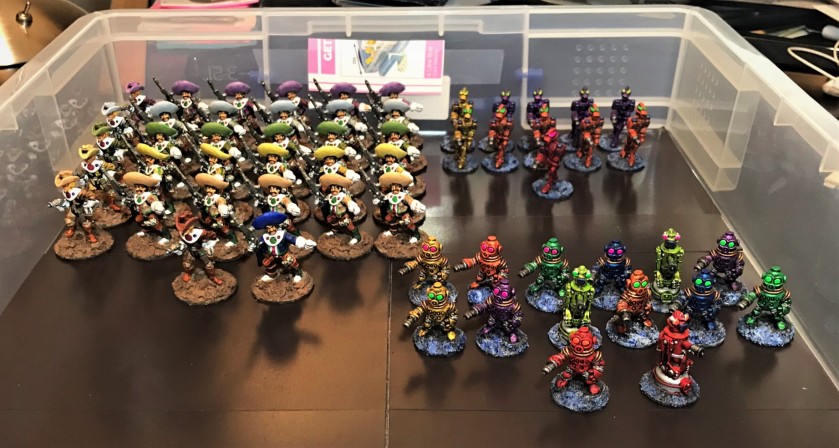 A rather productive month for Mark, I think you’d agree!

Somehow I see the Dwarves and their “Peacekeeper” allies causing a bit of trouble, before the Texian Rangers get called in… 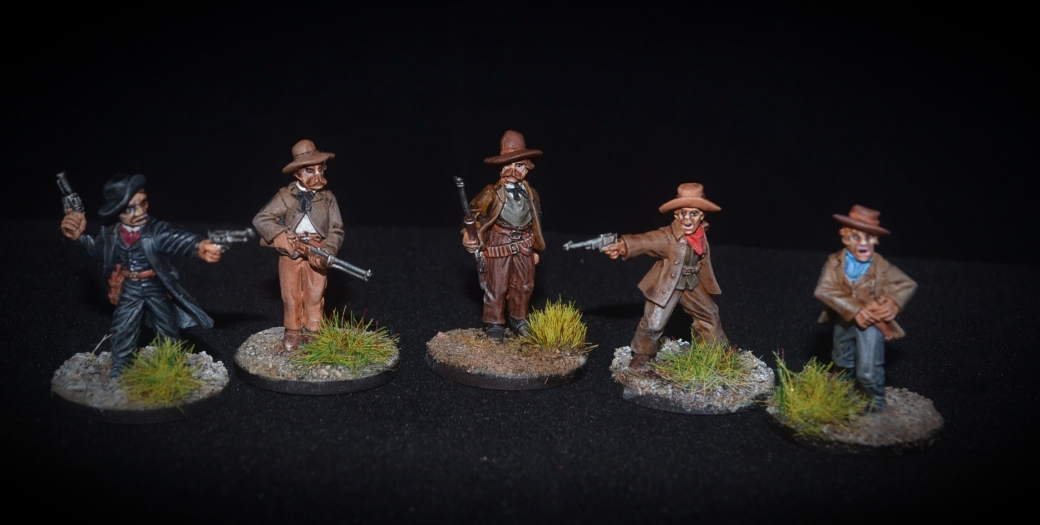 Bringing that Western feel right back down to Earth, The Imperfect Modeller (who I like to think of being named Tim, even if it’s not actually correct) completed a set of 5 rather rough-looking fellows known as The Lamerton Posse.

Ed from Malefic Design has completed a very cool looking squad of Black Legion Plague Marines. Not something we get to see all that often, especially with the new models. They work better than I’d have expected, and now I’m tempted to do some Black Legion with some of my own Plague Marines… 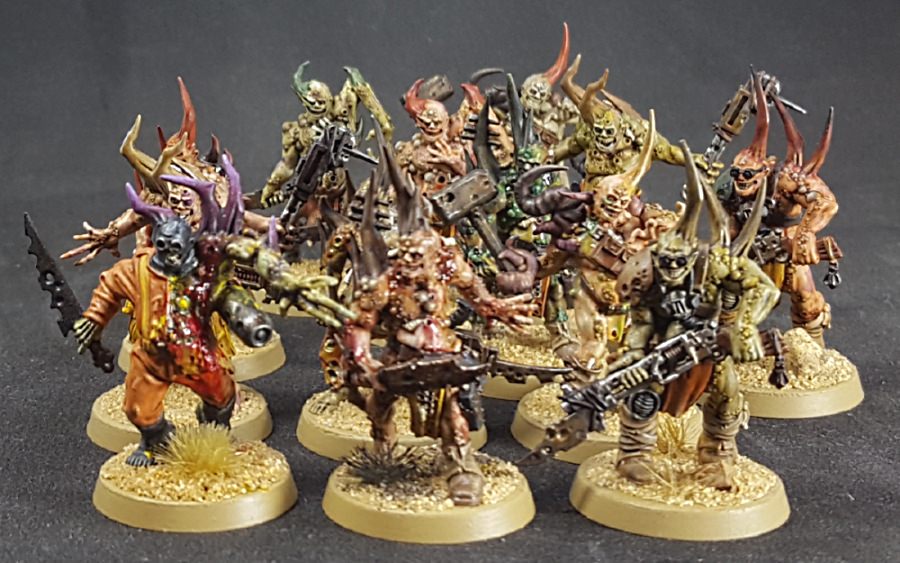 Ann’s Poxwalkers, Shambling towards YOU!

Ann from Ann’s Immaterium racked up enough Poxwalkers to bring her existing shambling horde to 13. Each one an individually painted mass of infection and sputum.

Pandora’s Bitz Box of the Krakendoomcool shared blog completed this unit of 12 Chaos Space Marine Possessed. The tweak here is that each of the models is based on a marine from a different Chapter (or is it the Legions?) As such, each model is an individual and well worth checking out on the site. 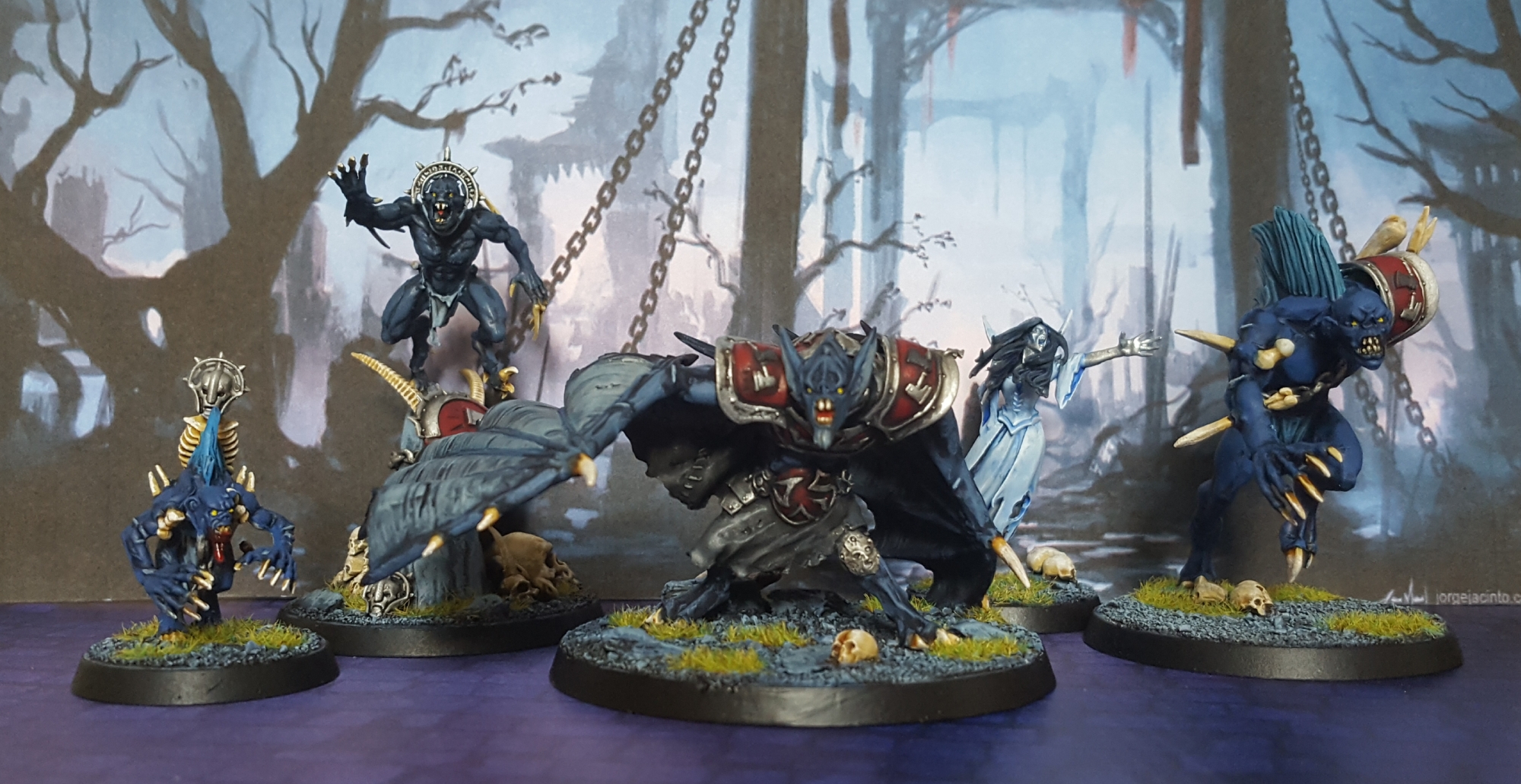 Finally, we have the gang from Wyrdstones and Tackle Zones who were actually taking part in their own challenge in June, to “Turn it Up to 11” by painting 11 miniatures. Since they’ve decided to get on board for our The Jewel of July challenge, I’m happy to showcase their work here for June-It, since the criteria cross over pretty snugly. 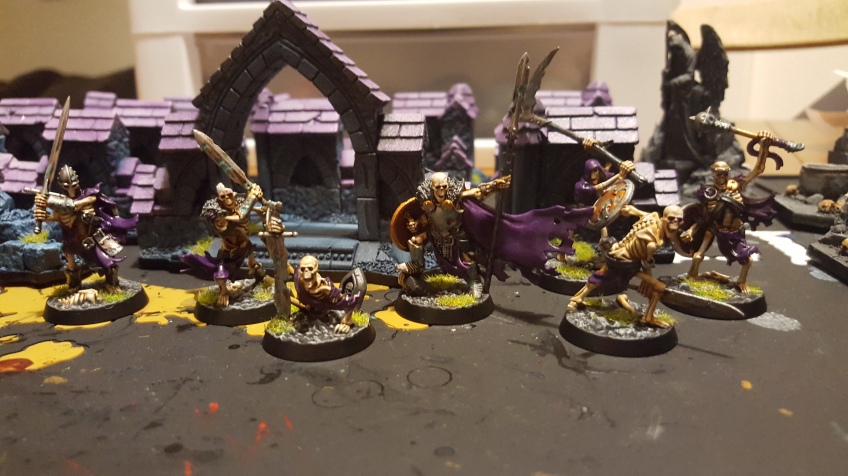 Jeff converted and completed a unit composed of a Varghulf and Ghouls for his Flesh-Eater Courts AoS force (and I’ll be stealing that Varghulf conversion idea!) as well as painting a Sepulchural Guard Shadespire Warband. 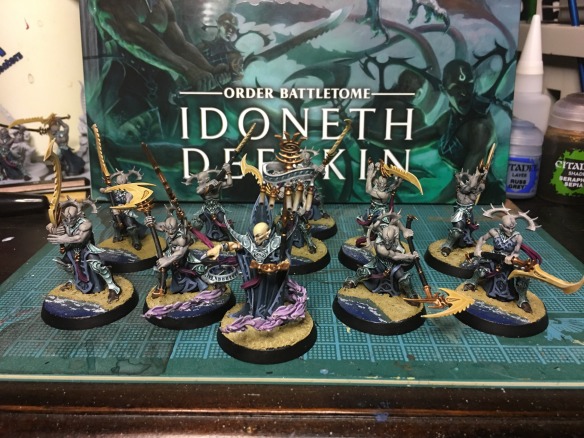 Jason completed 10 Namarati Thralls and an Isharann Soulscryer for his Age of Sigmar Idoneth Deepkin. 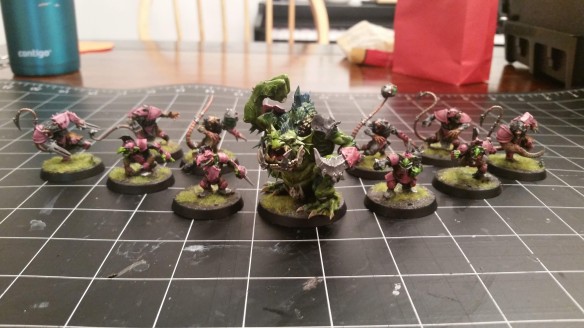 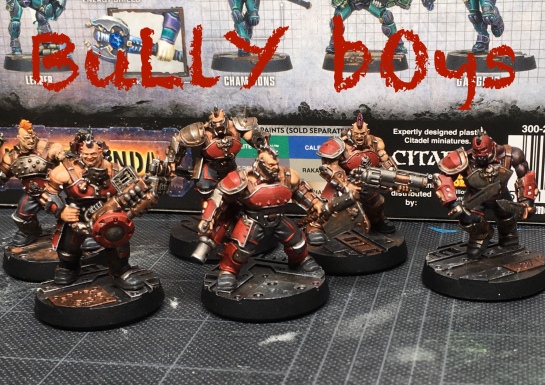 Faust of Double Down Dice painted up a starting six of his Goliath gang for Necromunda. 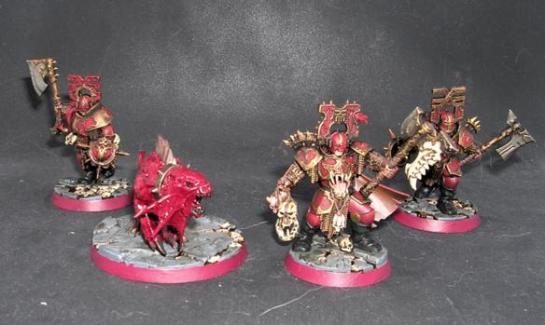 Alexis “Westrider” West of Cascadian Grimdark completed a Khorne Bloodbound Warband from the Shadespire set. You wouldn’t want to run into any of these four in a dark alley. Or on a sunny day in a park, for that matter.

Edit – Hey! I forgot to add in my own models. You can of course see them in more detail by viewing yesterday’s post.

And.. that’s it* for June’s June-It, unit-painting Community Round-Up. Apologies for it being this late. I’ve been snowed under with things, and so I’m also way behind on reading people’s blog posts, painting my own models, the TV shows I try to follow (over a month behind there) and on and on it goes..

*Obviously, I probably missed someone despite my best efforts, so if that’s you, please know it was unintentional – just reply to this post with a link to your model post and I’ll edit you in quicksmart.