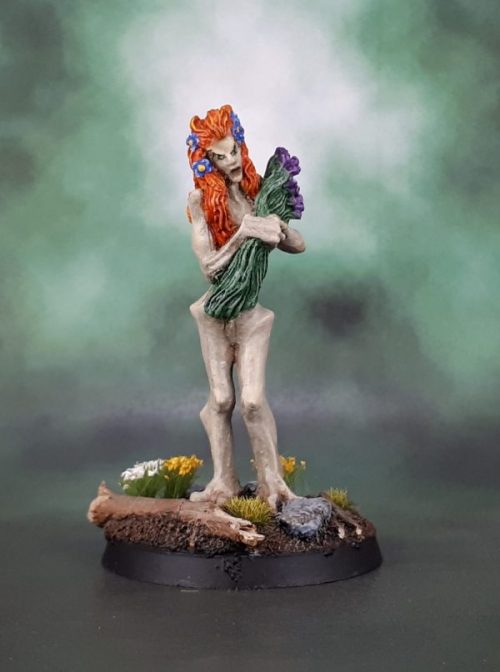 Fimbrethil had been missing since Sauron’s forces destroyed the gardens of the Entwives during the Second Age. At the time of the War of the Ring, Treebeard had not seen his beloved Fimbrethil for over three millennia.

I have a thing for Ents (hence my Avatar) and was drawn to this miniature because it is a female Ent and I think she looks quite cool and rather pretty.
I started the base coat back in 2010 and have since then worked on the flesh/wood tone on and off. I wanted to go for a light wood colour, her hair and flowers contrast nicely against the light wood. I am really happy with how the skin tone turned out the highlights especially on the face. I remember Azazel recommending that I read a painting guide/tutorial in a very old white dwarf on how to highlight/paint a face. 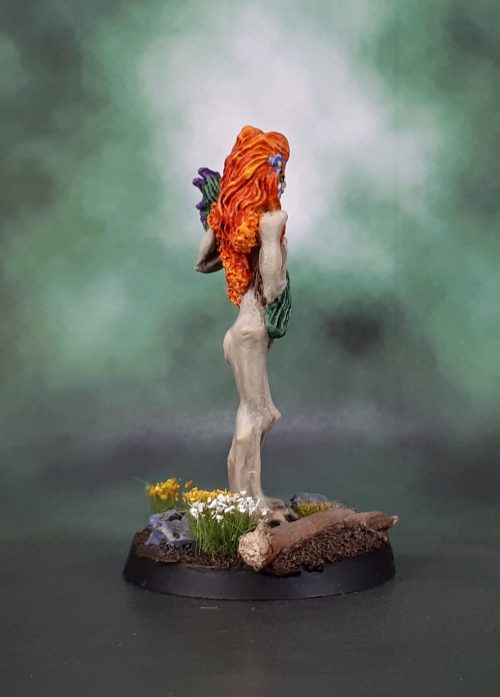 I wanted to go for a red/yellow/orange autumn leaf colour for the hair, and lavender type colouring for the flowers and stems. The fine details made me nervous to paint and gave me an actual headache especially the flowers in her hair, I use a magnifying desk lamp to see/enlarge the detail. I was too scared of loading the brush so ended up using/putting too little paint on the brush, oh well better to be over cautious than be ham handed.

The big motivator/push to get this miniature finally done was when Azazel mentioned a ‘competition’ and ‘prizes’ at The Temple of Morikun and I jumped on board. Although I did think of working on her for the ‘Fembrurary’ challenge earlier this year.

Before this last week the model was just the skin. I have completed the rest over the last week or so.

The Skin Tone was done with browns and greys it was such a long time ago I can’t recall the exact paints. I remember it took me ages to do, the highlighting and shading. I think it put me off getting the rest of the model done. I think I need to take a lesson from Azazel’s book, it’s better to get a model to good enough and finished instead of trying to be a perfectionist and not get anything finished.

For the base, clay cat litter rocks for the stones and real twigs for the twigs/log. I picked out some light moss and some white and yellow flowers.

This model is now out of production but can still be purchased from Mithril Miniatures. They have 38 still available when I last checked. Azazel told me that he bought this miniature back in the 80’s (before we had met) to use in Bloodbowl.

I am very happy that Azazel let me paint her, I think she looks beautiful. What do you think? She’s a bit heavy on the flower power, but I think she can get away with it.

Hopefully the next project wont take me 10 years to finish! I think admiring this one in the display cabinet should be motivation enough to get another model done. Maybe you guys can help me pick out my next project?