A couple of years ago, when I was working out another of my Greek or Viking orders from Wargames Foundry, I noticed a banner announcing “Warmonger Miniatures” as an upcoming side project/sister company/offshoot of Foundry where the Ansells would be working alongside Kev Adams to not only rehouse their own fantasy ranges, but also provide a place for newer sculpts from Kev to go. I was instantly struck by the fucking amazing looking goblin featured on the banner so I rang them from Australia to ask about purchasing it. They explained to me that the store wasn’t yet quite ready to open, I explained that I really just wanted that one amazing goblin if there was some way I could buy it, and nice people that they are, they said that they’d sort something out for me. 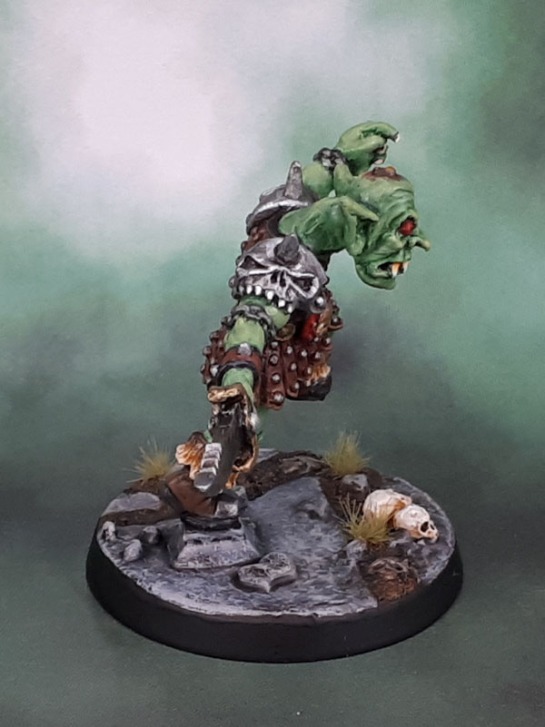 So when my order arrived. The goblin was in there. I also found that the head was a seperate piece, and it was glued onto the body with the neck hewn rather roughly – they’d (probably) sent me the actual goblin cast that they’d used on the site to spruik Warmonger.

You know, I could have pried the head off, rejoined, and smoothed the neck and all of that. But then – what I had felt cooler than a “perfect” miniature. So I left it as-is. With paint on it looks fine.

…and I’ve just noticed I forgot to do the sword gems. Fuggit. I’m still counting him as done in July even if I do the gems in August! 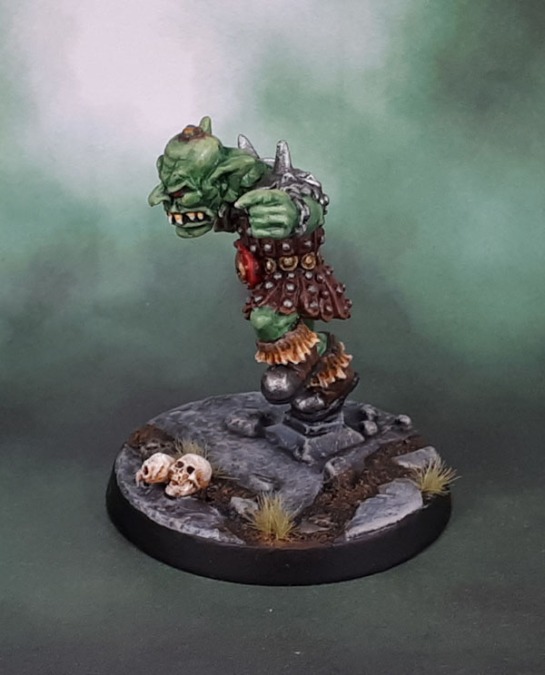 The other thing that really stuck out to me was the size. This model, with it’s typically-characterful Kev Adams Goblin-face was BIG. Much bigger than a normal goblin. More on that in a minute, though. So I figured out a base to put him onto eventually, and then took over a year to finish him. Working in dribs and drabs, getting closer one month only to be forgotten entirely the next. This is where the Rackham Goblin I got from Carlo currently sits – in the slow queue, on the painting desk, slowly moving forward to eventual completion…

As I said. He’s abig bastard for a goblin. How big? Well, the pic shows pretty well. He’s next to a couple of generations of GW’s gretchin (space goblins, basically) as my painted fantasy gobboes are packed away right now, and a pair of GW’s Orcs – again from different generations. Next time someone complains about GW’s scale creep, let them know it’s not just GW! This is why I’m calling this fellow a Gobin Warlord. Makes more sense now, eh? 😉

As for this particular goblin… I can’t find him on the Warmonger site. There are a ton of very cool looking Orcs and Goblins there, but this fellow is nowhere to be found for some reason. I guess that makes this one even more special to me in a lot of ways. Certainly one that deserves to be a Jewel of July, and for me – a special model to even own.

Whups! This post was meant to go up tomorrow. That’s how bloody tired I am. Ah well, just 2 hours early won’t kill anyone…