A kind of random model today. This was one that Marouda and I picked up from a gaming store a few years ago because it looked cool on the peg. Then it naturally sat around for a long time, before evventually being opened, started, and Neglected for …I dunno. A couple of years?

Anyhow, I found it recently, and so stuck it amongst the masses of models on the painting desk, and there, it stood. Still neglected as I worked on other models. A couple of weeks ago, I wasn’t feeling much on the models I was working on, so I asked Marouda to pick out a couple of models for me to finish from anything on the table (with the caveat that I can always say “nope, not painting that one right now” if I don’t like the choices). The two that she picked were Berkeley, and one other model that’s still WIP. 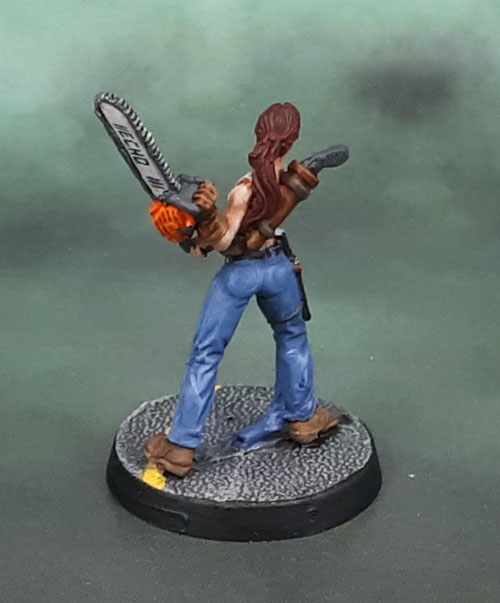 Pretty straightforward model, all things considered. I went for a nice triad of main colours with red for the hair, white for the top and blue for her jeans. A couple of shades of brown for her other kit for a more realistic overall look compared to a lot of the Warhammer stuff. In particular, I’m really happy with how her jeans came out (especially in hand). I was in two minds about adding tattoos, since the model’s arms are really fine, and I didn’t want to muddy them up. On the other hand, she looks like she’d have some ink, so I compromised and kept it to a couple of really subtle, part-hidden ones on her person. I wanted the chainsaw to be realistic, and wanted to go for orange for the plastic casing rather than use red or yellow. That’s also where I used some Contrast paint as well with thinned Gryph-Hound Orange over VMC Light Orange. For me, this is how I see the most use of Contrast paints working for me. After I was happy with the orange, I had to figure out something to do with the chain cover, since the plain off-white looked boring, so it was google time to find a brand that fit, since the names I’d most likely use have their own standard colours (Stanley uses Yellow, Bosch uses green.. that sort of thing). I found Echo, and they also use a font that I was able to reasonably replicate at that scale, so that’s where the branding came from.

It wasn’t until the model was completed that I actually noticed that the long strip of torn denim hanging from her leg to the ground that kept annoying me was in fact, a dismembered zombie hand. At that point I wasn’t willing to clip it off and have to repaint the mess it’d make of part of her jeans, so yeah. Long strip of ripped denim. Just unsee it! 😉