Wow. It’s really been almost seven years since I painted my T-34 tank platoon for Bolt Action, and… nothing since. Damn, time is flying by and unfortunately not in a way that there’s no end in sight! Anyway, the point of this post is not to dwell on the depressing impending end of individual existence – it’s to celebrate the fact that Dave Stone’s Season of Scenery Challenge has finally motivated me to complete this trio of tanks that I bought during Warlord Games’ Valentine’s Day sale.

Don’t worry! I bought a ton of other stuff at the same time, none of which has been opened, let alone painted. Yay me!

The main reason these three took so long to be completed is actually because of the unit markings – I really wanted to get them “right”, which required more very specific knowledge than I have, or have been able to glean from the internet. In the end, it was indeed this month’s painting challenge that motivated me to just say “Screw it!” and get them painted in a “good enough for wargames” manner, so while the specific markings may equate to nonsense in specific terms, they look the part to the layperson like myself. I mean, it’s not like multimillion-dollar movies worry all that much about this sort of thing, so I think I just need to get over it in these terms and skip the analysis paralysis in future.

Originally, I wanted to go with the plain, “sandstone” colour on these, as depicted in the box art, since I think it looks bloody nice. However, the model does not come with decals for some reason. So that required sourcing some third-party ones from both Warlord and Rubicon, though with the unit marking issue noted above, they all sat in boxes while the tanks sat in a tub, all spray basecoated. Even so, the decals I had weren’t enough to use to fully mark a trio of tanks, and so the unit circles on them came from a Space Marine decal sheet (which is why they’re so thin) with the numbers freehanded in. Not the greatest, and it does annoy me still, but I guess they’re passable. 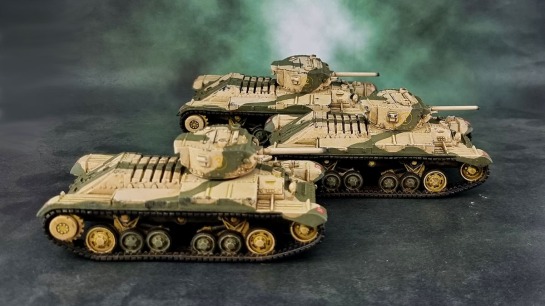 So in the end when I set to paint and finish these three – and in the interests of gameplay – I decided to go with the camo scheme in the end because I figure these models will mostly end up playing in games where I supply both sides – which means the main OpFor will tend to be DAK (Deutsches Afrikakorps, or Afrika Korps) – and those tanks will also be in a plain desert yellow/dunkelgelb. So to keep things more easily identifiable for anyone who might play – and might not know the difference betyween a PZIII and Valentine by sight (the heathens!) I went with the camo scheme for the British armour.

I’m not entirely happy with the finish on the desert yellow on these. It looks a little flat to me, so I may go back and “dab” some patchy lighter yellow on the panels to make it a bit less flat and uniform.