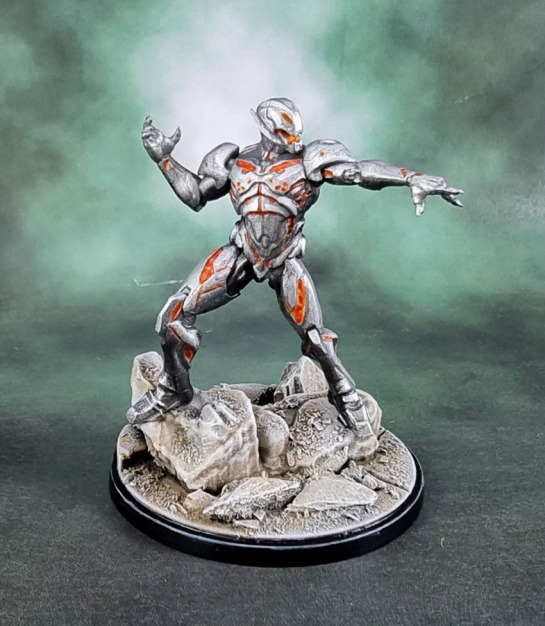 A Crisis Protocol Core set model today to open February’s completed work – The big bad of the second Avengers film – Ultron! I have to admit that I don’t know much about Ultron as in my comic-reading days back in the late 80’s and 90’s my Marvel focus was much more on Spidey, the X-Men (and spin-offs) and the Punisher – so while I know and have a basic knowledge of most of the heroes from that era, villains are a bit more vague. I’ll have heard of most of them, but not necessarily know much about them. Ultron is one of those villains.

An early touch point for the painting of my Ultron model was the rather excellent rendering painted by The Solo Meeple, though in the end mine turned out quite a bit brighter than originally planned. I also found the panel “gaps” in Ultron’s armour where the red-orange glowy bits to be really shallow impressions at best across much of the model.

When I sprayed this guy, I ended up with a bit of texture from the black primer – it was around the same time I varnished Red Skull and had a similar issue. Lesson learned – don’t spray when it’s too hot – even in the shade! I hope that’s why this happened anyway – so I can consciously avoid it happening again. It does give his, err.. skin?  armour? carapace? a slightly pitted look (especially when blown up in these photos!), which I guess can work for a metal villains but I do like the smooth look much more. I was satisfied with how the rubble on his base worked out, though. I added some weathering powders to give it a bit of colour beyond (not-quite-50) shades of grey and help define it a little from the silver metal man standing on top fo them. I might actually need to go back and add a little more brown to them, though not too much as it is supposed to be urban rubble… whadda you think?