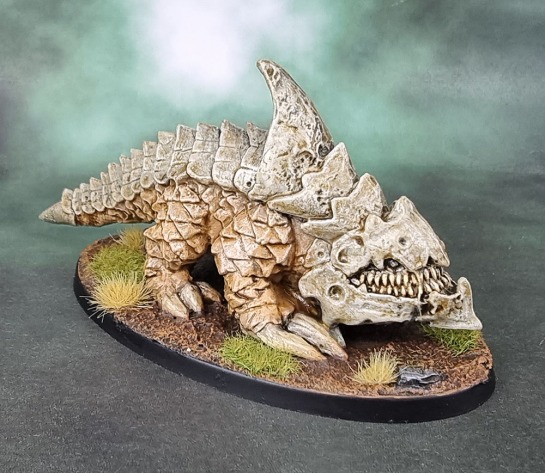 The first of my models for this year’s Monster MAYhem challenge, at Dead Dick’s Tavern and Temporary Lodging, I have a Reaper Bones model – the “Burrowing Horror”. This is their legally distinct version of the D&D Monster, the “Bulette” – which in turn is one of those old-school monsters that were Gygax based on those old toys that were mixed in with the little cheap bags of Dinosaurs that – if you’re of a certain vintage – you probably got as a kid.

As with many of these large but low-detail Bones models, this wasn’t hard to paint. Sure, I could have painted it a lot better than I did, shading the scales more realistically and so forth. Instead, I did a very simple job with it since it’s a verrry basic sculpt, and one made from the original, tacky, shit-tier Bones PVC. Even after firstly priming the whole models in watered-down liquid greenstuff, then priming it for a second time with Reaper’s Brown Liner, then painting it almost entirely with Reaper’s HD paints, I dared to varnish it with paint-on AK interactive varnish – leading to this piece of shit model ending up tacky.

So it’s done. It’ll go into a case until I need it for a D&D game (so possibly forever). No prizes for guessing that I skipped Reaper’s most recent Bones Kickstarter entirely. Easier and cheaper and better quality to just buy a resin 3d printer and a pile of STLs via Patreon. Finally, here’s the scale shot with everyone’s favourite scale model – Berkeley aka “Chainsaw Girl”.