Since the majority of my recent posts have featured Lord of the Rings figures, I thought a bit of variation was in order. These figures are various Warhammer 40k Chaos types, to be used as various champions in 40k, if I ever get around to playing it again. All are conversions, and mounted on the same range of scenic resin bases from Back to Base-ix that the Orc in the first post is on.

These figures were mostly finished during my previous foray back into painting miniatures, around the middle of last year. They were started.. a long time ago. 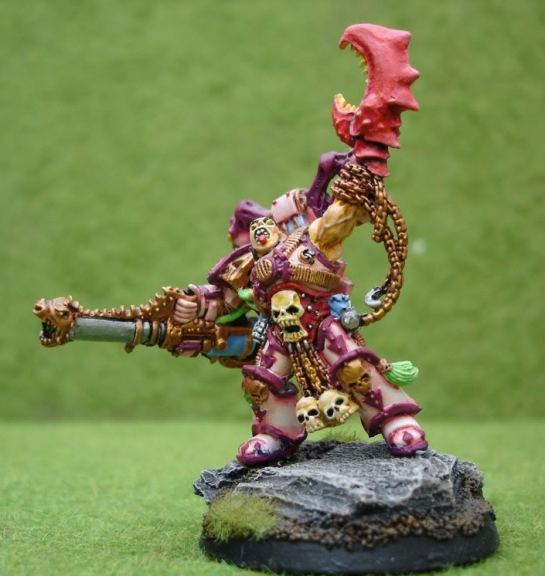 Slaaneshi/Emperor’s Children Champion. Converted years ago for me by Dave M. The base is a Kharn the Betrayer body, with a 2nd-gen Daemonette claw (the only thing that range of daemonettes were good for, in my opinion), a head from same and a Chaos Terminator weapon, which looked similar enough to a Blastmaster once the chaos skull shoulder pad was glued onto the base of it. Backpack is I think from the 40k Chaos Sorcerer.

This guy is a Terminator Champion of Nurgle. Also converted for me by Dave M (who had a good supply of old figures I was unwilling to cut up my own of). Simple enough, it’s a Chaos Terminator base, Jes Goodwin Chaos Champion head, terminator combi-weapon and left shoulder with a Abaddon Lightning claw, with beckoning fingers to finish. I can’t remember if Dave put the tentacles on it or if I added them myself later on.

Another Terminator Champion of Nurgle. I think Dave started this guy but I was unsatisfied with the result so extensively reworked it myself. Abaddon body, Chaos Warrior right arm with the original Chaos Terminator Power/Daemon sword on the end of it. I’m pretty sure I swapped out the original left arm for the GorkaMorka-era Ork Bioniks Claw and swapped in the plastic Chaos Champion head. I also drilled out the various tri-abcesses in the armour, added the bloated torso with putty over the top of some plastic Zombie intestines, added the dismembered heads, sculpted the hooves and added the tentacles.

I also started up a small Combat Patrol-sized Iron Warriors Army awhile back. I figured that a metallic/predominantly silver army would be a quick and easy one to paint, right? Not so for me. I tend to mess around too long on the finer details and they still take forever for me to do. I did complete one squad out of three which can be seen above. I did have a very specific vision in mind for them, so used a combination of Chaos and Loyalist Marine parts, Iron Warriors and Iron Hands components, and wanted to pretty much completely avoid the “Space Viking” horns that so many Chaos Marines have.  I also wanted each model to be pretty nicely unique, so there’s a fair bit of kitbashing, cutting up metal components, and a bit of guitar wire involved.

The slightly incomplete second squad. I may have even finished the project, but I take so long that GW keep on changing and updating the Codex books. I do have the latest CSM Codex somewhere. I’d just need to find it. And then rewrite the army I’ve assembled and half-painted. Then no doubt relegate some models to the “unused” figure cases. And paint up some replacements/additions.

Anyone out there have a love of writing and tweaking army lists? If so, I’ve got a lot of potential fun for you across both 40k and LotR SBG! 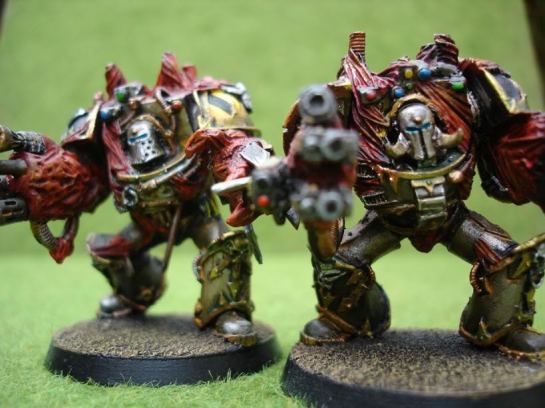 I absolutely hated the originals, and there were not yet detailed (enough for me) Plastic Terminators when I got these, and no Plastic Chaos Termies at all. I do like these a lot more than the previous figures, but found the large tracts of organic matter on them difficult to plan/paint, so I just went with a bloody-ish muscle/sinew look. I also changed out their heads for WFB Chaos Warrior head that fit in far better with the Iron Warriors theme, and kept the morphed weapons to smaller ones, as I thought the much larger ones looked rather stupid. Also added some piping and hoses with guitar wire, to make them look a little more unique.

Strictly speaking, these guys are not legal for a Combat Patrol, but I designed this (and other) CP army lists based on a theme of having fun with my non-collector friends. The concept being that I could have non-minis wargamer (but still gamer) friends over and have them choose a 500-pt CP-based army out of a selection of quite a few themed forces, and then have a fun hour-or-so battle on my games table. I’d supply all the figures, dice, rules etc, and the objective would be soley to have fun on a nice looking table with good looking figures. Since I’d be supplying and painting all the forces, there’s no stress of the “you cheating bastard” type, either.

4 thoughts on “Realm of Chaos”