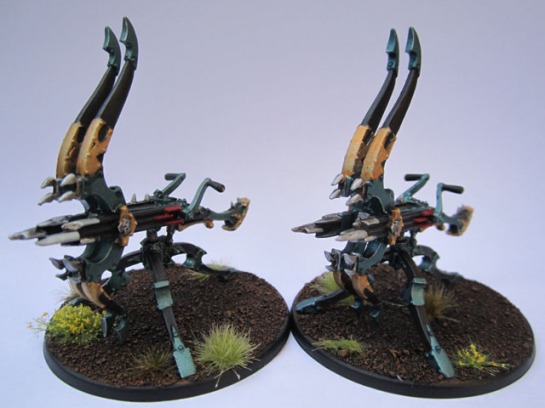 So hey, I’ve been finishing stuff at a pretty decent rate so far this year. As part of that, I plan to put up everything I finish this year, no matter what it is. So here’s some of the most recent stuff: 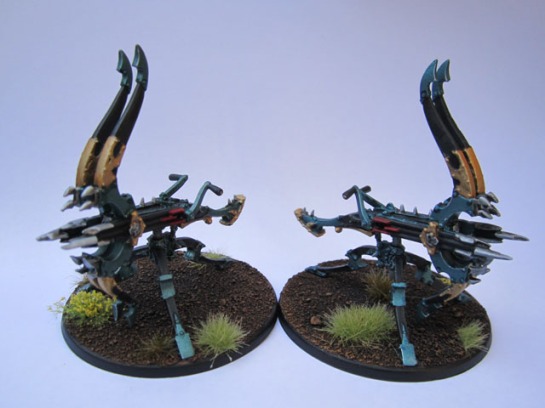 A pair of metal GW Dark Elf Repeater Bolt throwers. I got the pair cheap off eBay already assembled and primed, so the day after finishing the treeman last week, I decided to spray them with my two custom sprays that I got made for my DE/Twilight Kin – since I no longer play WHFB, I’m happily basing everything for Kings of War with it’s more relaxed basing options – so round 40mm bases from Proxie Models to the rescue. By the end of the day, they were all but finished. Of course, I need to do the crew sometime soon as well… I guess.

Over the Christmas-New Year period, I picked up a couple of sets of Secret Weapon Miniatures‘ “Bag O Crap”. Which is essentially miscasts and bits that don’t make their quality control standard. I’ve half-written a review of them, so I’ll save the detailed commentary for later, but suffice to say that a couple of other resin companies might want to take note of what Quality Control means. Puppetswar in particular.  These were done in Mid-Jan, but I didn’t get a chance to photograph them until now.

These painted up nice and fast, and (will) look good on the tabletop. I’ll probably need to buy a ton more of each, though… I went for a bright orange plastic that had both been sunbleached and dirtied up in use for the Jersey Barriers. Despite being pretty small and simple, I’m quite happy with how they turned out. These barriers will work nicely in everything from moderns to zombiepocalypse to 40k and everything in between.

Next up: More Zombies!