Something unrelated to painting challenges today – some Proof of concept models for the Minotaurs Chapter that I’ve been wanting to get around to painting sometime for the last several years. One of quite a few Space Marine projects that I’ve had percolating in my head in various ways for the last decade or so: Legion of the Damned, Mentor Legion, Iron Warriors, 30k Iron Warriors, Rogue Trader-style Crimson Fists, Space Wolves, Flesh Tearers, Dark Angels, Blood Angels, Grey Knights, Deathwatch. A couple of those have been started in some form or another (LotD, Mentors, Iron Warriors, Space Wolves, Flesh Tearers) while others have had a lot of parts gathered (the started ones, the rest, plus more). 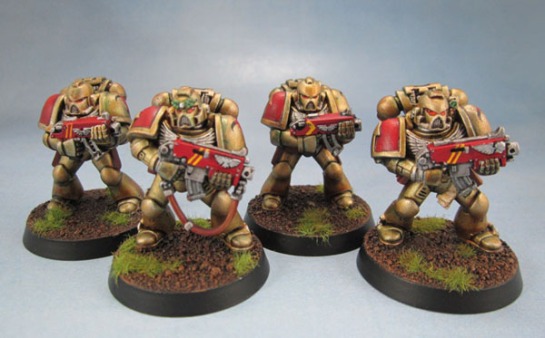 I wanted to try a reasonably quick “wash based” scheme inspired by Sasa0mg’s Minotaurs over on Dakka. I’ve been going with a spray black, spray silver, zenithal spray of a brighter silver, 2 coats of Seraphim Sepia wash, and then a highlight of Vallejo Model Air Brassy brass. Later on, I’ve given them a subtle wash of watered down Coelia Greenshade for a subtle verdigris wash based on the Forge World Badab War books’ artwork. I went with Silver/Iron for the chest eagles and such, along with red for eye lenses and gems. I wanted to minimise colours other than brass/bronze, red, black and “steel”, so leather straps and bags are done in a red-brown, and only rarely green appear on lenses or on specific things like wreaths in green, or (some) skulls in bone. 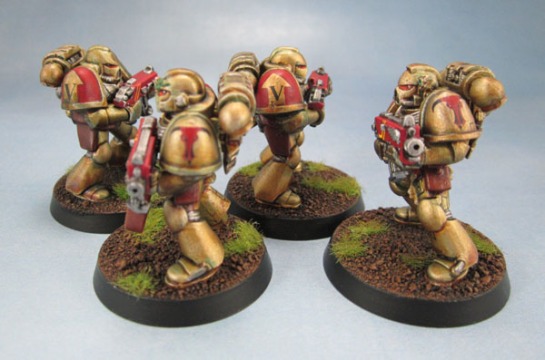 I used a pair of Marines from the 5th Edition starter “Assault on Black Reach”, though they seem near-identical to the 4th Edition starter models from “Battle for Macraggae”. Clearly I wasn’t paying a lot of attention when various Space Marines got dumped into figure boxes. The other two are from the 2nd Edition 40k starter. I’m actually not especially fond of them as models, but as cannon fodder/squad filler they’ll be fine. This is why I decided that these guys would be V squad (also, fitting the transfer onto the embossed tactical arrows). Mino transfers are from Forge World and the squad number markings are from some very old (90’s era) Ultras transfer sheets. Obviously everything has been rebased on 32mm round bases.

Anywho, I’m pretty happy with them and will continue with the same scheme. I’ve selected the rest of a squad worth and have started on a pair of them – using one of the many, many 2nd ed metal captains as the squad sergeant, and a metal 2nd edition flamer marine. The others will probably be additional plastic starter marines.