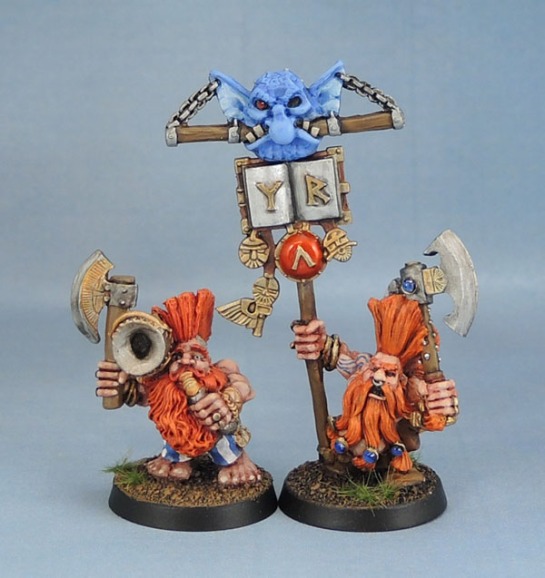 Taking a bit of a respite today from the 40k-centric series of posts that have dominated the blog for the past few weeks, we’ve got a fantasy post again, dealing with some more classic models.

Ahh… the 1990’s. Those were the heady days. When Games Workshop decided to split up the three figures in their command blisters so that they could sell you the unit champion separately. Making their first catalogue appearance in 1998, quite a few years after the majority of the range were out, are the first of Citadel’s Slayer Command pairs. Interestingly, they’re labelled “Troll Slayer Command” rather than “Giant Slayer” (which these particular figures fit far more closely). Either way, I was well gone from WHFB by that point in time, due to the Herohammer that it had become.

I got all of my metal slayers secondhand via eBay relatively recently, as I had pretty much stopped buying fantasy models by then, so that wasn’t a huge hassle for me personally, but even then it didn’t endear the company to me. Despite the number of Slayers that I’ve got and have been painting, I had a bit of a block when it came to the command groups (yes, there’s another one still WIP on my painting desk). That block was the standard bearer. While the horn-blower looks rather goofy, the standard bearer conversely looks quite good, but with a rather oddly-shaped standard that frankly demanded a flag, or something. Problem was the standard top shape isn’t exactly conducive to hanging a good banner, what with the troll head up there. (And is it supposed to be an actual troll head, or a metal casting, or… ?) 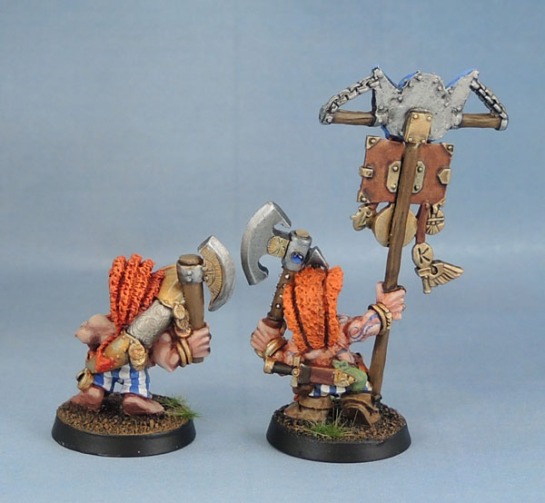 So these figures had been sitting on my desk annoying me, and silently taunting me to get them finished since I started painting my slayers over a year ago. But that bloody standard! Eventually, I was doing a google image search and saw …someone’s kitbash of a similar figure. They’d glued some of the extra standard bearer junk found on the various plastic Dwarf kit sprues to the thing. And it looked bloody good!

So I dug out my box of Dwarf Sprues that I purchased from Damo/Nerdfest last year and had a look through, and found the book-and-shield shown above, as well as a winged shield with crossed axe device. With an insignificant amount of carving, both were now mounted on my two standards, and this one made it to completion. The other one will be along presently. After I complete it…