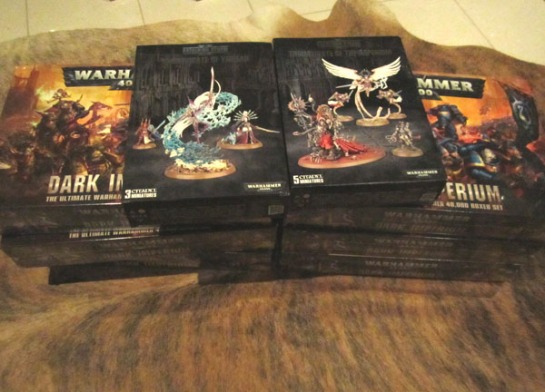 Not really a content post today as much as a SUPPLY DROP! one. – Part 1 of my 8th Edition stuff – the Dark Imperium boxes arrived, finally. I’m expecting Part 2 (Indices, dice, ruler, etc) and Part 3 (Forge World Indices, HH Book 7, transfers, some models, etc) in the next day or two. Don’t worry – I won’t be posting about each and every new toy that I get. And yes, I will be figuring out a way to sell a few spare rulebooks locally for less than the retail price.

With 8th coming, I dug out my DV boxes a couple of weeks ago. I’d decided to finally get the Dark Angels I’d accumulated over the last few years painted. Starting with the starter box models. The Chaos models have been put aside for now, but will make up the core of a solid force of Word Bearers with a few being siphoned off to other Legions.

Instead of painting at work during my lunch break, this is what I’d been doing for the past few weeks. Mould line cleaning! I figured it might be the kind of tedious-at-home job that could be bearable at work in short bursts while listening to a podcast or something, and luckily – I was right. This how I started getting through the few extra squads I’d eBayed before getting out the DV boxes. Yes, they sat sealed for years since 6th and 7th were not friendly to returning players. I won’t go on and on, I’ve made my opinion on 7th well known by now.

Here’s part of the production line. Weighting down the 32mm bases with washers before clipping the slottas off the DV models, and then gluing them down. I’ll end up with at least a Battle Company for starters – probably two. I’ll get to the Ravenwing and Deathwing components later. In the meantime, I’ve been going through the rebasing process for my existing DAs, moving them from 25s to 32s, and needing to build a bunch of extras to bulk out my old squads from 7 and 8 marines to 10s.

I’ll have some actual painted and finished models from the DA army soon. While I’m working on those, I can start figuring out how to distribute the Primaris marines amongst my Astartes armies. I won’t be doing a “Primaris Army”, but splitting them amongst my other forces instead.