Now with this being the third of this year’s Monthly round-ups, and given that it marks the first quarter of the year, I thought it might be a good time to look again at my year’s painting goals as listed during January:

1. Paint and finish some 2+1 marine forces/bump up existing small groups to this as a minimum.
Black Templars, Celestial Lions, Fallen Angels and Deathwatch, though I have another one on the go right now, and plans (oh dear, the plans) for several more. I’d also count finishing my 2006 Ork force in there.

Celestial Lions have gotten one squad as have the Flesh Tearers (“the one on the go” that I referred to). Both need a second squad and something like a Vehicle and/or a Dreadnought still. My 2006 Orks still need their Warboss and Grots to be completed. No more Fallen Angels painted yet, nor Deathwatch or Templars.

I’ve naturally got specific plans for this and that, but nothing done, bar a Captain for the Minos. I need to get cracking a bit more on both of these. With some luck, I’ll get a squad or more finished here. 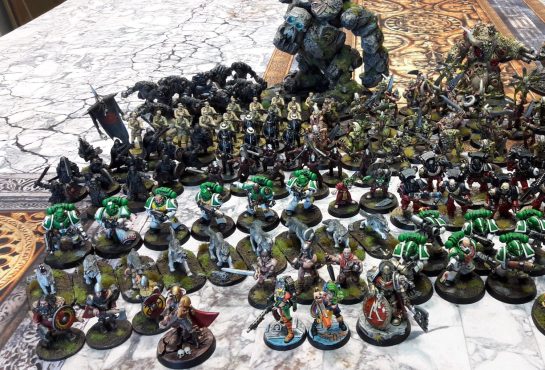 No movement here. Yet. I just need a bit of time and space to sort this out.

4. Finish more of the stuff I started but never finished. There’s a unit of Elves just waiting on three models to be done to be completed. There’s a unit of DUST Gorillas, a unit of Undead, some Mordor Uruks, Arbites, Savage Orcs… It’s bloody exhausting to think about how many started-but-abandoned units I still have.

February and March’s challenges have made some solid headway on a few of these. The DUST Gorillas are done, I’ve done some work on the Undead (2 units, it seems!), Mordor Uruks are done, Arbites are untouched, and I’ve done some work on the Savage Orcs. Seems like the Squad: March challenge got me working on some of the “neglected squads”. No bad thing, I guess – as it gets more of the started-but-not-complete stuff done and out of the queue and out of the way.

5. Complete all of my metal Dwarf Slayer models.

I’ve done a bit of work on a few that live on the desk, but nothing really significant, and nothing completed. 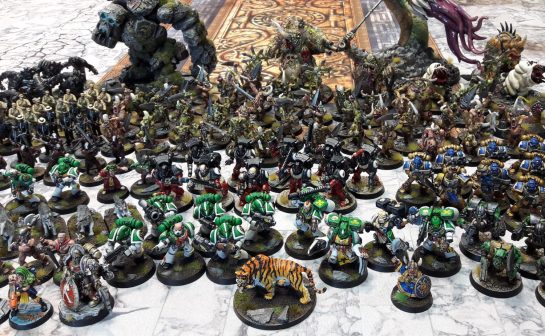 I managed to almost-complete the last of the Foundry Perry Ex-Citadel models I picked up a couple of years ago – though that was technically now, in April – pics next post. I’ve just primed Still tons more untouched, though.

7. Get a Nurgle Daemon army up and running.

This is essentially done. Well, up and running, at least. It’s pretty basic still, and there’s a helluva lot to go. I ideally want to finish my metal Nurgle Daemon models this year at the very least, and am making myself do so before I start on the plastics. I’ve got plans to add more to them in April, should things go well.

8. Get a Grey Knights army up and running.

Ain’t nothing happening here yet. 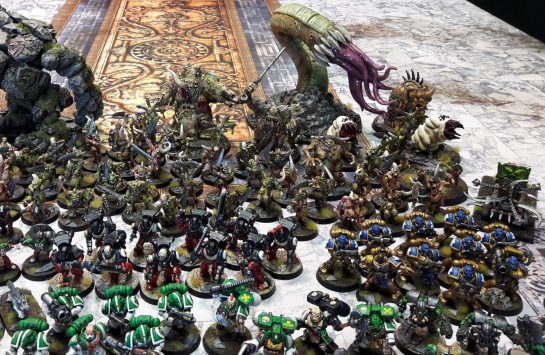 9. Get a second Chaos Legion force up and running.

Ain’t nothing happening here, either!

A few Necromunda models finished, and a few Vikings, another custom for Gorechosen, but not much more. I should do a little Shadespire project.

Still ain’t nothing happening here yet.

12. Then there are unfinished terrain pieces, projects like the Graveyard and the Mighty Fortress, and scatter scenery, and…

And yet again, nothing here. I did spray that bunker-y building in a custom Necromunda Blue, but haven’t done anything since. A couple of scatter pieces just finished, but again, not much.