Today we have another model from the Conan Kickstarter. This time it’s the Demon of the Earth!

A ferocious being from another plane. The earth demon can be summoned by both hero and overlord sorcerers to give them a huge punch in combat!

I took painting cues from both the box art as well as the painted minis by Martin Grandbarbe. Not trying to copy him directly, (the model isn’t good enough in my opinion to try that hard, though Martin’s work is absolutely lovely) but take some influence, as the plain greenshades taken from the art leaves the model more than a little plain.

Also a cue taken from Martin’s page is a hint as to what the hell this model is supposed to be – perhaps a demon vassal of Thugra Kotan, who is a Stygian sorcerer character from the story “Black Colossus“. 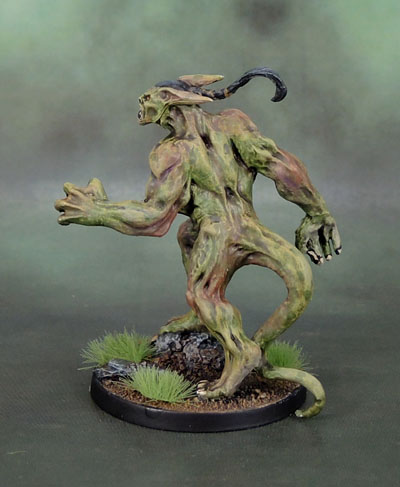 I initially tried to ape the box art, but the dapples in the green skin looked bad, and then when I tried to unify them with the rest of the flesh with a glaze and wash, they still looked sub-par. So then, influenced by Martin’s models, I added in some flesh variations – a ruddy flesh, and then added some ochre highlights and purple shading to give it some interest – because as all shades of green he was severely lacking.

Baal-Pteor, Demon of the Earth and a Mentor Legion Space Marine for scale.

I’m still not especially keen on this figure, but what can I say? He’s done – and still looks decent for a boardgame model. Certainly good enough for me, once again. On to more and better models now!

18 thoughts on “Conan Kickstarter’s Demon of the Earth”