“Then the leader, who was now half across the Ford, stood up menacing in his stirrups, and raised up his hand. Frodo was stricken dumb. He felt his tongue cleave to his mouth, and his heart labouring. His sword broke and fell out of his shaking hand. The elf-horse reared and snorted. The foremost of the black horses had almost set foot upon the shore.” – Flight to the Ford, Fellowship of the Ring

Today we have the next batch Nazgûl for The Fellowship of the Ring Scenario Project. Obviously, I featured five Nazgûl on foot yesterday, so today we have seven, all obviously mounted. Despite only having Seven of The Nine painted and complete, I think the group of them looks nicely sinister. Once again, a credit to the sculpting talents of the Perry Twins.

While four of these models have been seen before on this blog, as noted yesterday they still had work to do to be 100% done – while the other three of these mounted models are all-newly-completed. Sure they were part-painted for godonlyknowshowlong, but the important thing today is that they’re now done – and they have the basing, the rocks, the weathering powder applied. So done and literally dusted.

And with that, I’m counting all seven of these this month. They needed work and they got it. At this point they should never need to be touched again, so done and done. 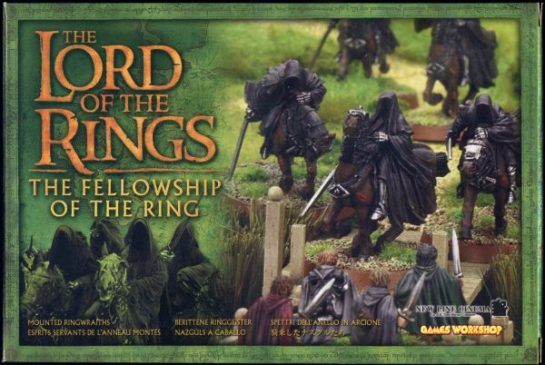 Even though there are seven here – and not the full nine that the Nazgûl should be, I’m calling it a completed unit since I only have this many of the unnamed versions before they started getting extra-fancy with the up-armoured Ringwraiths, naming them (all?) post-RotK and giving them unique rules and personalities and models. They only released the three mounted models to my knowledge, anyway. Unless I (possibly) have another two, which would make nine. An old post of mine seems to say I do, but then I’ll need to figure out where they might be… Fake edit: I found them, but it’s going to be especially tight getting them done by the end of this month. They’re also a pair of the same sculpt, which is far from ideal. On top of that, I have the four final Nazgûl on foot to work on. I actually think I have a chance to get them all done, but probably not varnished (and cured) in time, given the tight time frame and terrible cold weather we’ve got right now… 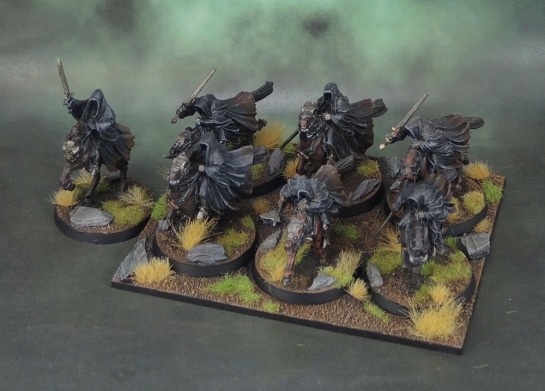 I also sorted out a unit base for the six of these, so that when I (eventually) use them in a game of Kings of War as (proxy stats) Vampiric Cavalry, they’ll look nice. I’m counting the unit base as a completed model as well, as it’s a distinct piece and has more work in it than a lot of the scatter-terrain boxes and crates and barrels that we put together…

oh, and if you’re wondering why I’m posting this stuff up almost every day – motivation, BAY BAY! The feedback I get from the community (that’s you) on these posts genuinely helps to keep me going and getting this stuff done. It’d be pretty easy to just spend all my free time playing PlayStation and XBox and watching WWE/NJPW wrestling, after all.

16 thoughts on “The Fellowship of the Ring Scenario Project Pt2: The Black Riders – Mounted Nazgûl (June-It ’18)”