After completing the Last Night on Earth box worth of models, I really wanted to keep that momentum going, so I went into my tubs of models that had been started-but-not-finished, and found this pair/foursome of Zombicide figures and got to work on them. 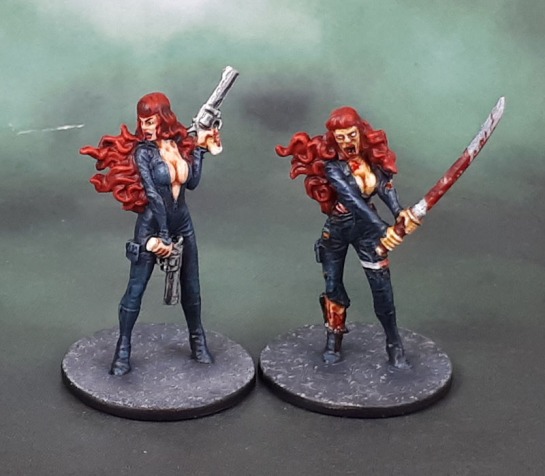 “Elsa”, who appears to be pretty much a Not-Black Widow was primed black and had some grey on her bodysuit(s). I went back down to the black and then started again, this time using Citadel Incubi Darkness for my highlight colour, achieving a nice blue-black look to the bodysuits.

Bright red for the hair, and I kinda went for a comic book kind of shadow-highlight on the front of the living version’s bangs – though without going to full black as you’d see in a comic. But a bright, bright comic-book red for her hair.

These sculpts are from a few years ago now (2014-15), and they do make me wonder if CMoN would do something similar now. I mean, they may well have done so with ZC:2e, as I admit I didn’t pay too much attention to the campaign or their updates. The two figures do keep making me think of that old Simpsons episode where Bart disguises himself as an adult to buy a ticket for an R-rated movie and the cracked-voice teenager who works in all Simsons retail says “enjoy Boob-A-Rama, sir!”

The second pair are of a Clown, from the Kevin Walker guest artist pack – Uncle Honk. I dunno if Uncle Honk is based on any clown in particular, though I did somewhat mimic the official card artwork for his costume, I went with more red than dull orange on his pom-poms, and thinking very little of the “official” clown makeup design, I had a look and think of other options. Now I wanted to avoid the whole “Evil/Killer Clown” thing for the most part, since Honk is a survivor and player character, so nominally-at-least, he’s a “good guy”.

So that meant no Pennywise V1 or V2, John Wayne Gacy, or even ICP. Krusty seemed too on the nose, and so I went with some more generic markings that worked alright on the face’s tiny details. (And I only thought of Doink after I’d finished the model!)

Paintign those stripes was not an enormous amount of fun, but I’m happy with all both pairs of these two characters – and now there’s a couple more Zombies and Survivors ready for any Zombie-Pulp gaming.