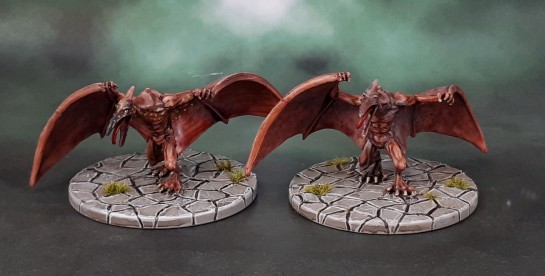 First up, Happy New Year to those of you who are reading this in the timeframe it’s been posted. Secondly, here’s another pair of models completed in November. I’ll really need to get out and photograph the rest of them so I can wrap up the November stuff as quickly as possible. These sculpts don’t appear to have been used in the Nolzur’s line, but do appear as prepaints in the D&D blind-box themed sets. I tried to add some interest to the models and distinguish them from one another slightly via the use of some mottling and dappling on their wings and flesh, but they’re a bit meh. 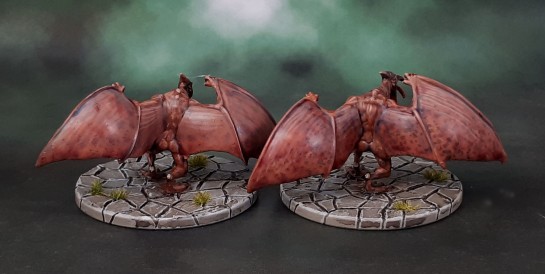 I used quite a few glazes of thinned paints as well as some thinned contrast to make it seem like their mottled patterns were within the skin, rather than like warpaint slopped onto the surface, and that effect turned out (mostly) okay – it’s just the ruddy flesh shades I ended up with in the end I’m not super happy with. Later on I saw a very nice looking colour scheme that I would have probably stolen outright, but alas, it was too late by then. I have started to add small tufts to the bases of the ToA models, as it seems to be more of an outdoor setting. There’s also a bit more brown in grey of their bases. Just enough for me to feel like they work as something that could be on a flagstone road in the jungle or in a ruined/slightly overgrown temple, but also subtle enough to work if we combine sets and have them inside a dungeon. Ptera-folk inside a dungeon? Makes as much sense as most of those old-school “monster mash” D&D-style dungeons!

And yes, those are indeed unplanned tide marks of the base rims, and no, I don’t particularly give a fuck. 🙂