And here’s the May Round-Up. In almost mid-July. Ah well. It happens! 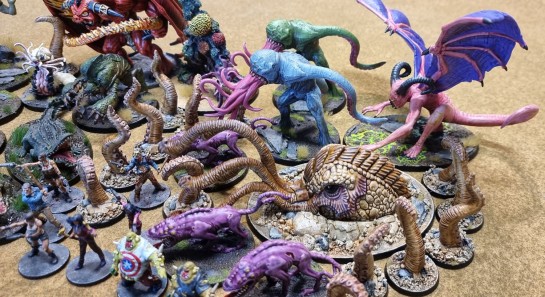 The big painting challenge in May was Monster MAYhem over at Dead Dick’s Tavern and Temporary Lodging, hosted by The Angry Piper. (and goddamn, Keith – add a like button and extend how long comments are open!) So in the end my output for May very much reflected that, with all but a handful of Zombicide models (shown in my last post) being ones that fit into that “Monster” category.

Ann, indie publishing baron and host of Ann’s Immaterium also ran the Summer Solstice Painting Challenge over the last almost-2-month period, culminating on the 20th of June. That challenge was to nominate your best/favourite model painted in that period – which is so hard – they’re all like my children! I’d assumed I had entirely missed the boat on that one, what with my non-existent posting schedule over the last month, but it seems Ann hasn’t yet posted the round-up ….up – so I’ll probably nominate something from July for that. Though, seriously, it’s not going to be easy to figure out which one to put up there….

So with that, I guess it’s time to crunch the numbers and in a couple of days we’ll move onto June’s models!

So… ahh… 43 models completed in May. Add that to the 140 I had tallied in April and we have 182 in total back at the end of May/Start of June. Sadly, my June totals aren’t nearly as high and fell far short of my “1 per day per month” ideal target, but I did at least keep on painting during my blog hiatus, and I’ll move onto showing those very shortly. Just need to take the photos and write the posts first…