Here’s the latest update on the Ogre Army Challenge. Another unit of restored Old-school Citadel Ogre Warriors. This time, the unit comes from Bob Olley By the way, Bob currently has a Kickstarter up for his range of “Scrunts” – Victorian and Steampunk Dwarves. Not to be confused with Squats. Only 14 days left!

This guy always reminded me of my Dad, from back when I painted him, and still to this day he reminds me of my father at that time. A bit of the face, the Calabrese complexion, the physique and even the brains(!) This figure is based on the original Olley-sculpted Ogryn Sergeant. (Not the original RT Ogryn, though!) 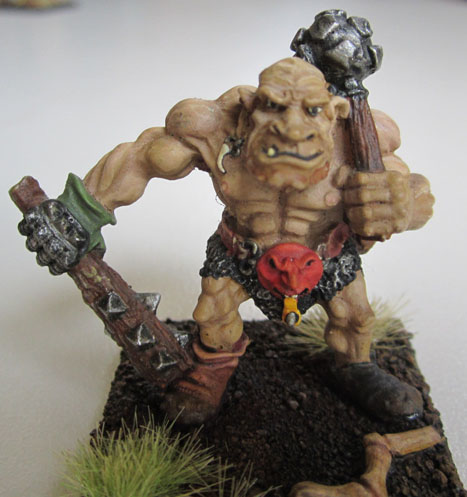 Another of Bob Olley’s Citadel Ogres from 1989.

Another of Olley’s Ogres. This one, amusingly enough always reminded me of my friend’s father who had been – amongst other things – a boxer back in the old country, and the bald noggin and complexion always helped that particular comparison.

If I were to paint this guy today, he’d be covered in tattoos. Still – my rule for these guys is pretty much: New bases and “restoration” – so touchups over chips, dull metal and godawful colour choices only rather than repaints. I’m keeping an eye on eBay for another, though…

This one was painted a little later, with a more sub-saharan theme. I’m sure Ogres could come from all sorts of places across The Old World, not just the Emprie, right?

The third of this batch of Olley Ogres. The blue straps are a bit bright, but they’re not overwhelming enough to need to be repainted. IRL they’re not quite so garish.

A couple of shots of the newly restored unit. I’ll do an army-in-progress shot when I put the next finished unit up. 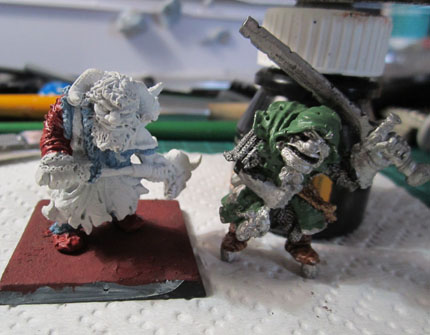 Mantic’s Ogre Shooters: Units 1 and 2.  And Based.