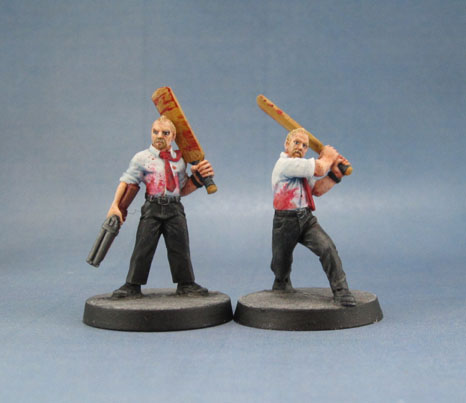 Another couple of figures that I painted recently (at the same time as the first batch of Zombicide survivors) were Hasslefree’s Ray, and Dynamic Ray. Obviously I painted these as they’re Hasslefree’s take on Simon Pegg as Shaun of the Dead. Since all four figures were of the same character, it made sense to paint them all at once. I’m showing off these separately I think the Hasslefree models deserve their own post, and since people looking to check out the Zombicide or Hasslefree models may not be interested in the other. (Especially as the Zombicide one is no longer available/Kickstarter exclusive)

Although these are shorter than the Zombicide figures, I prefer both of these to the “official” ZC sculpt, as they have more character to them and are nice sculpts, and the cricket bat looks like a cricket bat (particularly on Dynamic Ray). These are somewhat heroic-scaled, though. “Regular” Ray is an early Hasslefree sculpt, and as such, Dynamic Ray – the later sculpt – has a better likeness of Pegg, better proportions all around, and better detailing (just look at the pants!) Still, if you’re a fan (or need a figure for that boardgame!) either or even both are a worthwhile purchase.

Hasslefree also has a Zombie version of Ray, though I don’t own that one at this stage. I’ll probably pick it up next time I get around to doing a Hasslefree order. And yes, Ed will be joining his mate at some stage in the future.

7 thoughts on “Hasslefree Miniatures “Ray” aka Shaun of the Dead aka “You’ve got red on you.””