Since my group has been playing a fair bit of Zombicide over the past couple of months, and starting to paint the figures was one of the things that got me restarted with painting models, I’m showing off the first three here. I’m painting S2 Survivors & Zombvivors rather than the S1 figures because I’m painting them in their pairs and we haven’t cracked open the S2 box(es) yet and so don’t have their Zombvivors out. 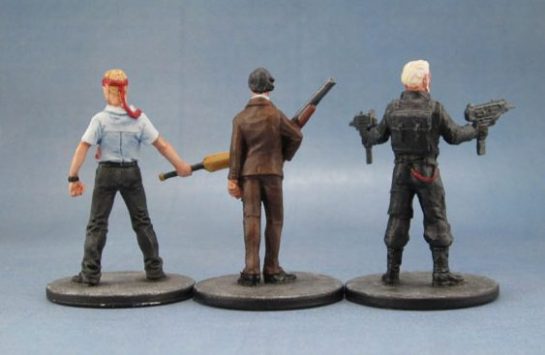 So here they are, individually: 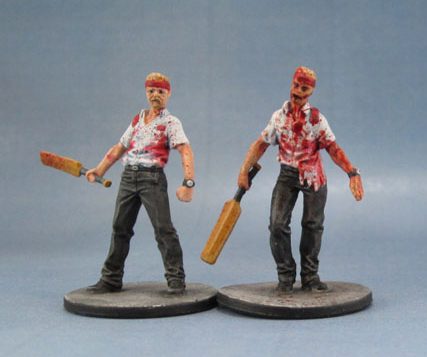 I took Shaun’s black pants as a little challenge, as they’re quite nicely sculpted. To make them look black, (they are SO black in the film and stills) while still picking out the sculpt detail – but without resorting to typical light greys and almost-white highlights. I think I pulled it off. In contrast with the pants (and several other Zombicide figures), the sculpt on his head and face was a bit of a shambles (the artwork isn’t so hot, either!), and his cricket bat was clearly sculpted by someone who has never held or possibly even seen a real cricket bat, as the thing looks more like an American college fraternity paddle from a comedy film. I did pick out his two-tone-red tie, but I fear it is too subtle, and is lost in the general bloodstains on his clothing (taken from the point in the film where he’s using his tie as a headband).

As always, I googled the character before beginning to paint, and found that in most images Basil’s suit was actually grey and not the brown pictured in the Zombicide artwork. In the end I made the choice to stick with brown as a brown suit just feels so much more 1970s and “Basil Fawlty”, somehow. I did carefully copy the colours of his tricolour tie from the reference photographs, though. This figure is quite nicely sculpted as well, though I found that his face again didn’t photograph all that well. (and the figures appear shinier here than IRL). A small detail that can’t be seen here is the shine and polish on living Basil’s shoes that is absent on undead Basil’s scuffed shoes.

This was the easiest of the three to paint due to the almost entirely black outfit. I’m not really a fan of over-highlighting things, and as John Mason is supposed to be a black-ops type guy, I kept his gear nice and dark. I did pick out his medical lanyard in red, and painted his twin Uzi SMGs in Vallejo Metal Black with a highlight of gunmetal, so they’re actually far brighter than is realistic. The sculptor of this figure did a good job of picking out Connery’s trademark “smirk/people’s eyebrow” look in the sculpt, and I did an okay job of keeping it followed by an average job of photographing it. The Zombvivor also looks better in person, as shiny transparent red over dark grey/black also doesn’t photograph all that well.

And now group shots of the trio in Zombified “Zombvivor” form:

7 thoughts on “Zombicide “Fred” (Shaun of the Dead), “Don” (Basil Fawlty) and “Rob” (John Mason aka Sean Connery from The Rock)”