After last weekend, the latest unit of my old-school Ogres finally got finished, with the completion of “Bounty Hunter”, who like so many other models I’ve been completing recently was started 10+ years ago. Without too much chatter, here they are:

As I said, this guy had been part-painted and in a minis case for some amount of time probably approaching 20 years – sometime around when the others were started and the initial ones were painted, in any case. I’ve kept as much of the original paint I started with him and worked on the rest. Still, I had one hell of a mental block to overcome in order to finish him. 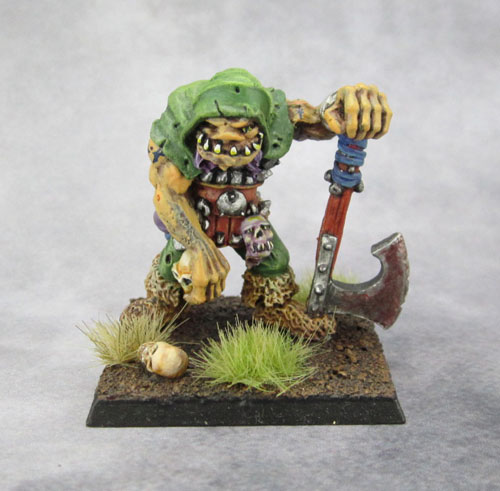 Gutlagg here was basically finished years ago. I may have even shown him off on these pages before, but now his unit is finished, and he’s been promoted to the unit leader. So hey! 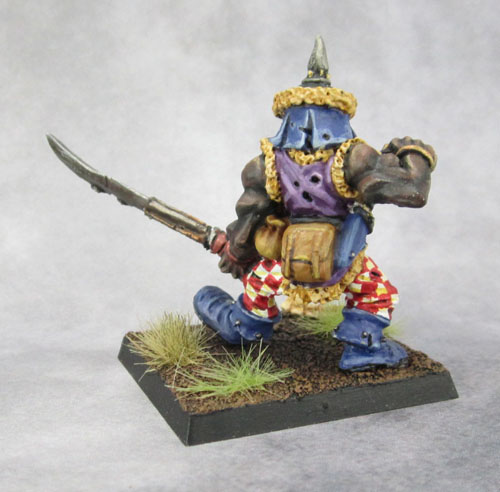 This guy has a name, but he’s usually just referred to as “Ogre Thug”. There are two versions of this guy with just a small variation between them. This one has a small pouch attached to his chest, while the other has a small armoured disc. Since I somehow ended up with three of this guy, including both variants, I ended up converting two of them. One can be seen here, with the original mace head replaced by a hammer head and the spike on his helmet removed. The guy showcased on this page was originally painted in an embarrassingly garish scheme. (Yes, how he appears here is heavily toned down). His weapon mod was also embarrassingly bad. So bad in fact that I don’t think I took any photos of him at all before reworking him. His mace head had been replaced with an Advanced HeroQuest (Or Dark World? Something like that, anyway) Ogre’s Big ugly tree-club with a spike added to it. It looked awful. I ended up adding a Mantic Ogre’s 2-hander blade to it, and it looks roughly a million times better now.

Mantic’s Ogre Shooters: Units 1 and 2.  And Based.