I had this trio of figures sitting around for a few years, doing nothing. I always found them pretty uninspiring, so really had no plans to do much with them or buy more. I’m not entirely sure why I bought them – probably just collecting the different LotR figures before GW went super-ridiculous with embargoes to AU and such a few years ago. You know how it goes. At some point in the last year or so, I decided that since there were only three of them, and their outfits as seen in the films were basically a mixture of dirty rags, I should paint them quickly and get them done.

So it turns out that painting figures which you don’t especially like in an uninspiring colour scheme does nothing for getting them done, so they languished with a few base colours for a year or so. Until recent, when I tried again. That attempt was a failure as well.

So. Thoroughly uninspired, I turned to Google image search to find some inspiration to paint these little suckers and get them off my painting desk. As luck would have it, I found some images from FunkyBrush’s painting blog, (posted on Lead-Adventure) with his Dunlanders converted and painted as Celts. This led to some further poking around, and the images on Bennett Blalock-Doane’s blog cinched the deal. 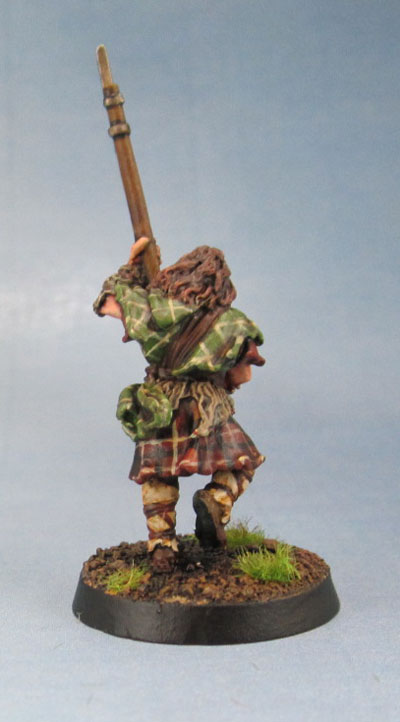 I’m particularly happy with how the tartan patterns came out on this guy. I drew inspiration not from modern Scottish tartans, but (obviously) from the Celts’ long history of woven clothing and cloth. I didn’t convert the weapons or add shields as FB did, as I tend to like to keep my “first” one of any given figure untouched, unless I purchased it for that purpose, or it’s otherwise an irredeemable/seriously flawed sculpt. So these guys are Wildmen of Dunland, and when I have a bunch of my Warlord Games Celts painted up, they will also be Wildmen. Sometimes. Except in games where they’re all used as Celts, including the Wildmen. Who knows what the future of the table holds? Kings of War games with Saruman leading his Uruk-Hai army alongside his Celt allies led by Boudicca? Why not? 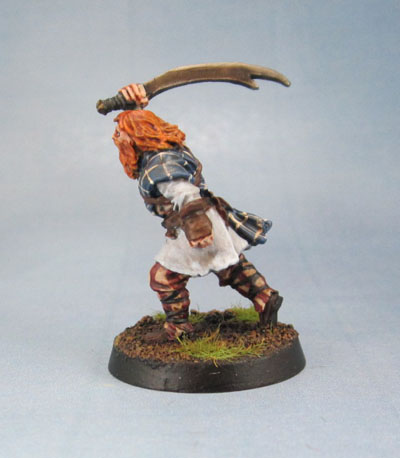 I repainted this guy as a ginger, as opposed to the dirty unkempt grey/white beard that he originally had when I was trying to be more movie-accurate to Jackson’s films. When I threw that out and decided to go Celt, I almost painted the top guy as blonde, until I remembered the comments about Rohirrim as “straw-heads” in the (books? films?), so I toned it down to brown. Of course, that just applies to these three, and my actual (eventual) Celts will have plenty of blonde and bleached hair amongst them! There is a fourth sculpt that I don’t have. I’m not going to chase it, but if I happen to see it for a reasonable/cheap price someday, I’m sure I’ll pick it up. 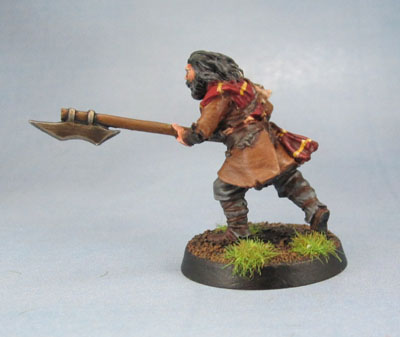 The Celtic theme was a real inspiration. Adding a woven tartan pattern to these guys was a real godsend, as it allowed me to have some fun on them and do something I like with freehand. So ultimately, after pretty much hating these hard-to-paint models for the longest time, they finished up as a trio that I’m really quite happy with and got done in about a day. I like it when that happens. Gotta love the internet for inspiration!