This pair of Goblins are from 4th Edition Warhammer Fantasy Battle. Not quite “proper” Oldhammer, but close enough for me, as they were some of the first models out in that time, and more impoerantly are Kev “Goblinmaster” Adams sculpts.

I skipped freehanding a shield for the champion, and used a sculpted shield this time. I did it for two reasons in about equal measure – being too lazy to freehand one, and the (bright) sculpted shield being totally in keeping with the era and nature of these figures. My concession to the “red period” of GW which these models helped to usher in is the chestnut/red-brown that I use for the boots and staves. 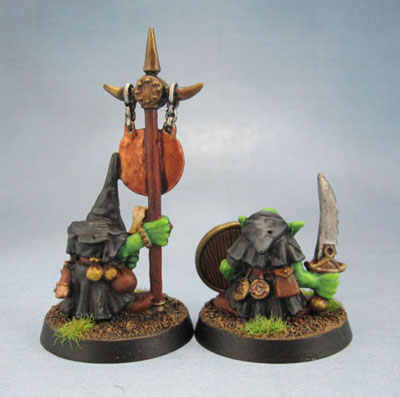 I also skipped adding flames to the rims of their hoods. I might keep that sort of thing for the Fanatics, Clubber/Netter guys and some of the Squig guys. I’ve also disliked the checkered pattern that GW gave their Orcs and Orks around that time, so you’ll rarely if ever see that sort of thing on my greenskin models.

There should probably be a standard bearer to go with these guys. If I manage to find him and get a banner painted up, I’ll show the three of them together. For now, it’s just the pair!