I finally made myself finish off a couple more of the Minotaurs I’ve been (not) working on in the past couple of months. Both models are most commonly identified with 40k Second Edition, but actually date to the late stages of Rogue Trader. The Captain “Veteran Captain” is listed in the 1991 catalogue, and the flamer marine to 1993, right around the launch period of 2nd Edition. For a long time, I did my best to purchase and collect every space marine figure, so that means I’ve had this captain for 25 years. Good thing I’ve finally painted them, eh? Shame about all of the others I’ve yet to get to…

Both are painted more or less the same way that the test models were. I got a bit stuck on the colours for the Captain’s gemstones, as I want to avoid the use of too many colours on the Minotaurs and keep the overall palette quite Spartan (see what I did there?) Green will be a rare spot colour, with blue only a little more common. Where possible, I’ll be keeping the palette to bronze and red, with iron/steel/bone and a touch of yellow for specific markings. 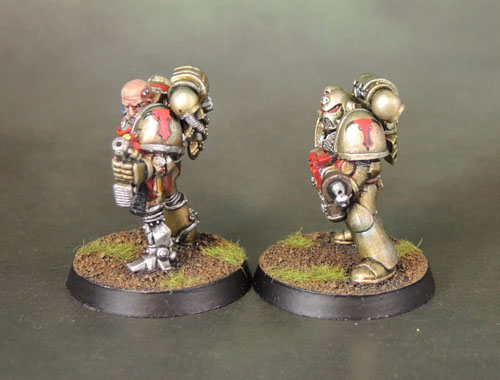 I’ve used a couple of bits of Forge World’s Brass Etch on the Captain – the bull’s head chapter badges on his Shoulder and also the one on his Bolter. 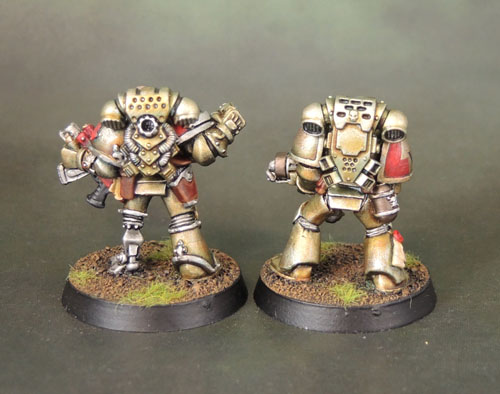 One original backpack, and one modern one. I’ve used the modern pack on the flamer marine to help blur the lines between the older models and the more current ones, as they will all be mixed throughout the force – along with armour variant marks from FW and Calth, conversion bits from Anvil, Maxmini and Puppetswar, and so on. 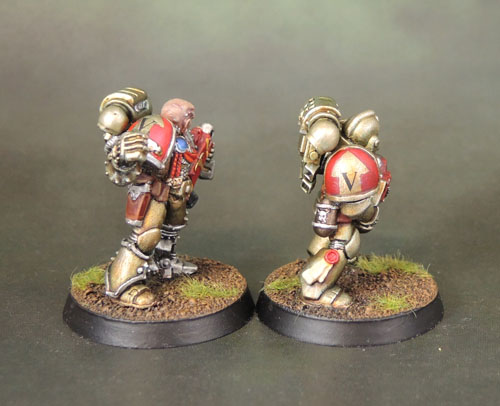 It’s a little hard to see in these photographs, but I’ve also used a metallic red as a final layer on the Captain model’s pauldrons as another point of differentiation between him and his men. Vallejo’s Turn Signal Red. I’ll also be using him as a Veteran Sergeant, rather than a Captain – mostly due to GW having produced SO many gorgeous captain models over the years, so the eventual commander of this force will be a little more fancy, and it also allows me to get use out of a nice captain figure that would otherwise have sat in an unpainted marines box forever. 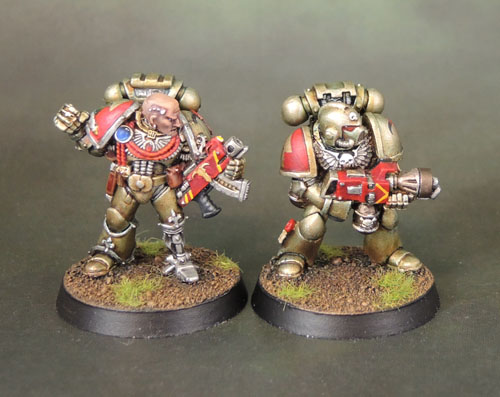 As can be seen, I’ve based the pair of them on 32mm bases. They’re not exactly filling them out, but even these older marines overhung the 25mm rounds, and I do like the space it gives them.

When combined with the original test models, I actually have a combat squad worth of painted models. Hurrah! Now to finish off the final four tacticals for this group to make them a full squad.