Today I have a couple more orcs to share. These were started god-only-knows how long ago (seriously, I have NO idea) and finished during the long period recently where I was too busy and burnt out by work to post much – but still doing what I could to get some painting in.

The smaller one is from 1993, so the early days of WHFB 4th edition. He’s definitely a variant sculpt to the commander to the 1992 Rock Lobber. I’ll have to find, build and paint it. I may have even painted the other crew in the past few years, so that should theoretically be an easy unit to reunite and complete. Anyway, he’s listed in the Black Catalogue 4 (1994 filled with 1993 models) as “Orc with Sword 4”. 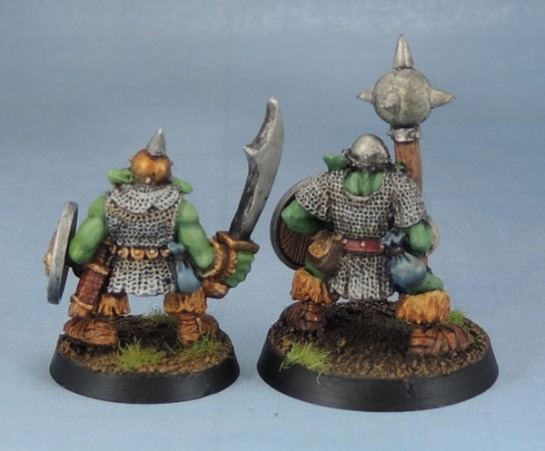 The larger orc is found in the same catalogue. Called “Orc Big’Un with Mace”, this pair is clearly from the period where the interesting names of 3rd edition and before had been dropped to be replaced with upfront descriptions. I actually rebased him recently onto the 32mm, as there was quite a lot of overhang on the 25mm round I had him on. I plan to continue to drop large orc models onto the 32mm bases.

Both will eventually find use in various games including Kings of War, though I’m not sure what as exactly for the big guy. Their orc list is lacking pretty severely in decent analogues. When I recently read that KoW plans to add more units to the Orc and Goblin armies, I suggested to some members of the RC that they add something to represent the archetypes of “bigger meaner orcs” and “barbarian/berserker orcs” I was brushed off since they were clearly analogues to Big’Uns/Black Orcs and Savage Orcs, while they want to go in a more original direction. This from the people who started out by bringing us a range of alternative WHFB models for Orcs, Dwarfs, Elves, Chaos Dwarfs and followed up with the highly original Space Orx, Space Skaven, Forge Fathers (Space Dwarfs/Squats), and the Uncharted Empires book filled with rules to use your formerly-WHFB armies. I mean, I appreciate the rules, but don’t even pretend that there’s a precedent of being particularly original.

No, instead, they’re going with this:

The RC wants to do a new unit for each of the core races (main rulebook + Trident Realms + Nightstalkers), but also bring them all up to the same number of units. This means some armies, such as Orcs and surprisingly Goblins, will get multiple new units. This hasn’t been confirmed yet, but Ronnie did agree to flying gore riders for Orcs.

Also, I should clarify that flying pigs = flying gore riders. Background wise something along the lines of an Abyssal Dwarf interbreeding experiment (like ADwarf halfbreeds) that was uncontrollable by the ADwarfs and a flock escaped, but they’re now bred extensively by Orcs.

Yep. No orc berserkers or bigger, meaner orcs. Those are too derivative! Instead – flying pigs!

13 thoughts on “A pair of Kev Adams’ Citadel Orcs (and a little rant!)”