With the completion of the Aspiring Champion and Bearer of the Missile Launcher, I’m calling the first squad of my resurrected Iron Warriors  – started over a decade ago – finally completed. The squad originally only numbered 6 in total, as it was built as part of a force for Combat Patrol games back during a time when CSM could take a Special and a Heavy weapon in sub-10 squads. Unless we were house-ruling that? I can’t remember. They keep changing things like that, so I’m not going to get bent out of shape about the minutia of how many special and heavy weapons they can have. I’ll dump the three Execution Force Iron Warriors in here for now to bring them to nine, and split the Exes off into separate squads when I have all of the current stuff that needs to be finished after a decade done and start on into totally new squads. At that point, I’ll bump these guys to 10 or more as well. 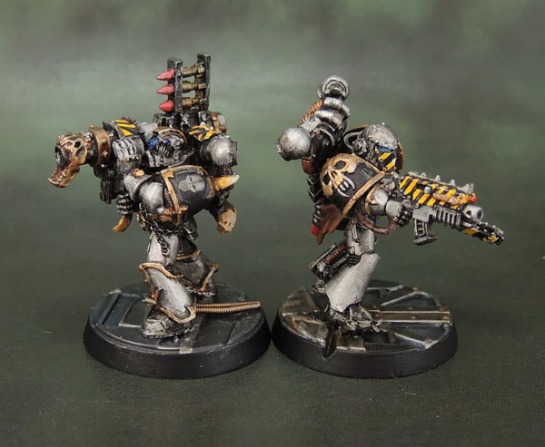 At the suggestion of Dagger & Brush, I’ve began adding some cabling made from clips of guitar wire to some of their bases in an attempt to give them a bit more “pop” and 3-d interest. I haven’t been able to find my copper wire yet, though I may go back and add a few of those when I find them – and add some more guitar wire to additional models at the same time.

My first Iron Warriors Chaos Marine squad, finished and rebased onto Sector Imperialis 32mm bases. I’m now onto working on the second, close combat oriented squad. After I finish those, I can start on some brand new builds.

My Aspiring Champion, showing off a section of guitar wire added to represent power armour cabling as well as a few hazard stripes. When I started these models years ago, I’d intended to heavily chip and weather their armour and weapons as well as add rust and oil stains to their armour, but I quite like how they look now. Not quite clean, but not too grimy, either.