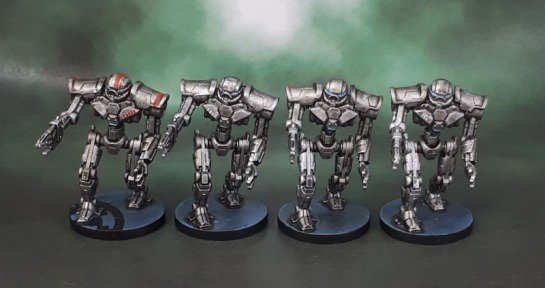 The first models I finished in April were actually posted awhile back – the two Ice Elementals from Mantic and the big red K̶h̶o̶r̶n̶e̶ Wrath dude from The Others: 7 Sins – both posted up as part of Monster March, as I finished all three of them just over the line (AU time) – but they’re ultimately April models in my own timeline. That leads us to this set of four models – these were started in February and were part of that initial “hey….” thought that led to the inception of the Gender-Ambiguous March Painting Challenge, along with the Mummies and Beavers and Werewolves.

Looking at the shoulder pads on these models, I figure that they fit in well enough with Armoured April, so they ended up serendipitously rolling into the following month’s challenge…

This time, when painting the models, I pretty much ignored the “canonical” images, as I preferred to paint them metallic as opposed to in greys. So I did just that. I’m such a rebel.

As usual for Imperial Assault gameplay purposes, I needed to differentiate the leader/Elite model. I did so this time by painting the usual part-of-an-Imperial Cog on the edge of the base, and also by adding additional markings on the head, chest, back and shoulder beyond the more subtle chest and shoulder markings I’d painted onto the regular droids. Should be enough to make him fit in with the Imperial Forces while also standing out just enough on the tabletop.

And that’s it for today’s update. I’ll get some more stuff up shortly (I took a few more photos tonight) and hopefully continue to slowly catch up with all of the blogging things over the next weeks.