Tre’ Manor is a sculptor who is talented beyond belief, yet he is very much stuck in his own strict perfectionist mentality of how he wants to create his models to their own, slight and slender – and rather tiny scale. Sadly, this means that his models do not scale well with other commercial miniatures, most importantly Reaper and Games Workshop/Citadel – which is a key factor in limiting his success. I can’t fault his personal choice to follow his own artistic vision – but sadly for me as an onlooker, Tre’ seems to constantly be launching Kickstarter projects, some of which fund while others fail, endlessly sculpting and resculpting the same range of barbarians that don’t fit in with anyone else’s models. All while much more financial success sits only a few literal millimetres away with a larger scale that fits in with the big dogs’ ranges. 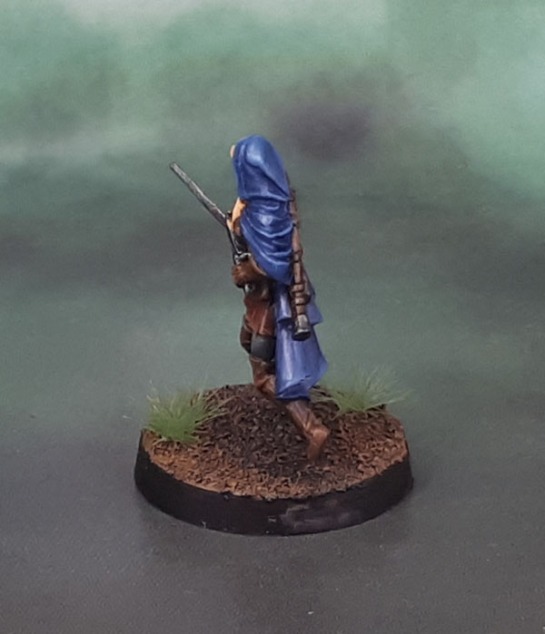 They do fit pretty well with GW’s Lord of the Rings ranges, especially the earlier, more “truescale” models, as I’ve discussed before, but there we’re talking about a limited number of Tre’s models working with a limited aspect of the LotR ranges. Anyway, the purpose of this post is not to grouse on Tre’s choices, especially since he’s genuinely a really nice guy in all of my interactions with him. It’s just frustrating when you see a guy who is so nice and so bloody talented being so recalcitrant to doing some stuff that could make him SO much money and allow him to follow his own vision with a bit more financial security.

Beautiful Eivor is an elf-maiden model I picked up quite a few years ago when I did a large order of RBG models, and has was selected slightly fewer years ago to be used as a replacement-PC model for a D&D thief from one of the WotC D&D Boardgames. You know, Castle Ravenloft, Wrath of Ashardalon, Drizzzztiness of Drizzzzzzzzt and all that lot. Obviously the model would work just as easily (or even more easily) as a ranger, and was probably purchased with that in mind, but the thief role came up, and this figure was available. 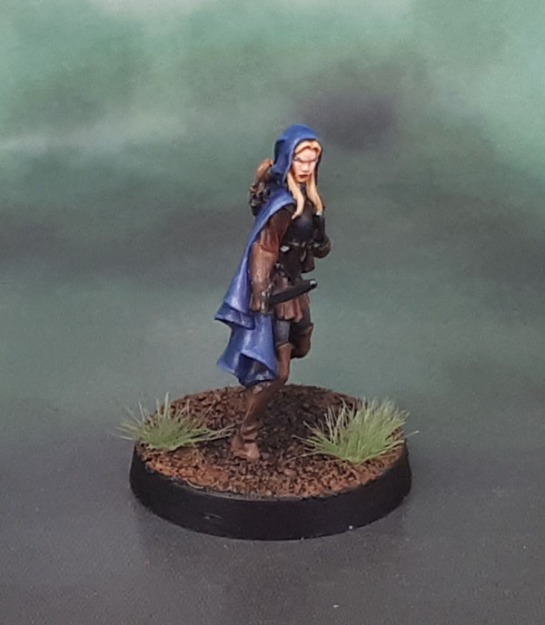 This particular model appears to be discontinued at this point in time, but with quite a large range for being a one-man, one-woman shop, I can understand how RBG could only keep a limited number of models available at any given moment. You can also see just how thin she is from the “flat” angle. Truth be told, her shortsword is so thin, I’m a bit scared to actually use her in any kind of game where the model might be touched. It feels like it’ll fall off with a sneeze or a solid glance.

Paint-wise, I went with a combination of dark earth tones with a nice dark blue cloak, because those colours say “D&D Thief” to me. I also painted what looked to be designed as sexy bare legs above her sexy thigh-high boots as leggings, because that also says thief to me more than the extra bit of skin, and in turn makes the tunic more sensible adventurers’ “work” clothing than sexy mini-skirt. I went with blonde hair in the end after initially planning on dark hair simply because I wanted her hair to stand out a little, and dark hair just got lost with the dark, mostly muted clothing. 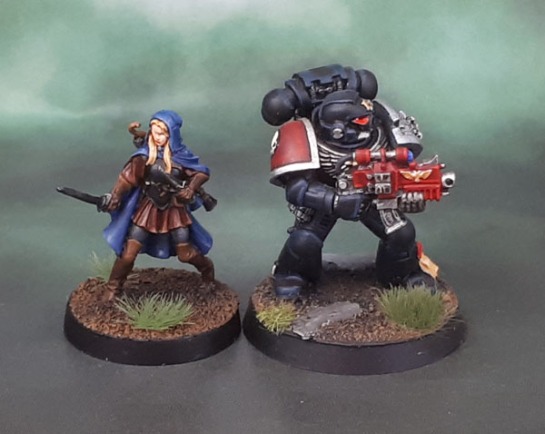 Finally, here’s a size comparison. I’m sure that any japesters amongst you would opine that she actually is correctly in-scale with the Space Marine, but the Astartes model does work to show just how slight Eivor is compared to a “normal” GW model. In the end, Eivor is now finished, after quite a few years of being mostly-undercoated white with a messy bit of blue slapped on, sitting on a textured base. Not a neglected model month, but another neglected model finally completed!