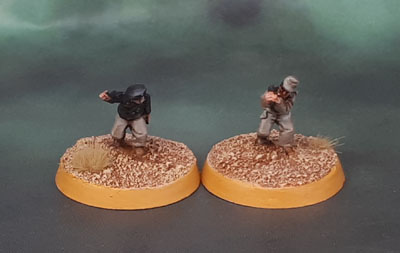 Do these count as 2 models? That’s what they are, after all! This pair of tiny dismounted crewmen came from some pack or another of FoW models, many years ago and were individually based to serve as markers, before such things were commercially available. I think they were for “crew shaken” or “vehicle stunned” or some such (it’s been a LOOOoooOng time since I played FoW) – basically, the idea being that when an armoured vehicle was “stunned” for a turn, I’d put one of these little guys next to it to represent that the crew had bailed out temporarily.

So far, so uninteresting. I know.

Anyway, when Marouda and I had a muckabout game of TANKS! a few months ago (how time flies when life is shitful), I got out my old, half-finished DAK army for FoW and we used one or two of the tanks. I think I used the Tiger I as a Panther. I also got these two out, and they were used as counters. I think. Anyway, they ended up out, and seeing how simple that they are, they got transferred inside to the painting desk so they could be ignored inside instead of in a figure case outside. Cut to me actually noticing them recently, and re-realising that they could be finised with probably only a few minutes of work. So I (finally) did that.

Scheme was simple. Basic DAK-desert-y clothing & boot colours, and a black Panzer Corps jacket and beret for one of them. I should probably dig out some more of the little markers I made for things like pinned and dug in and whatnot and finish those too. Small wins are almost always worthwhile…