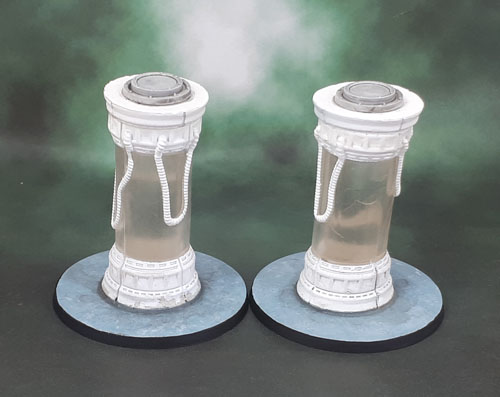 After the positive response to my last few days worth of posting, I thought it was a good opportunity to hit everyone with something really underwhelming. In this case, I have a pair of Bacta Tanks from the Star Wars Miniatures range of prepaints brought out by WotC from 2004-2010. It was a surprisingly decent game, though I never got into it hardcore, and most of my purchases for the game have been via the post-2010 clearouts and fire sales from various places. These two I picked up late last year from a local place for cheap to maybe use in the actual game, but more realistically, use for Imperial Assault boardgame terrain and 40k-related Scenery. Not much to say here. I ripped off their warped and wonky bases and replaced them with HIPS 50mm bases, which I painted in that bluish-grey tone I use for other Imperial Assault things. I also found some old WHFB shields which I fashioned into super-crude pieces to add a tiniest bit of detail on top.

Could I have done more? Of course. But let’s be entirely real here – the models aren’t all that great and are still slightly wonky and warped – and ain’t nothing I can do about it! So I mulled over this briefly and then decided that they’re not worth the time it would have taken when I have to much else to do. So this is it, and here they are. They’ll look fine from an arms’ length. All good, and good enough!