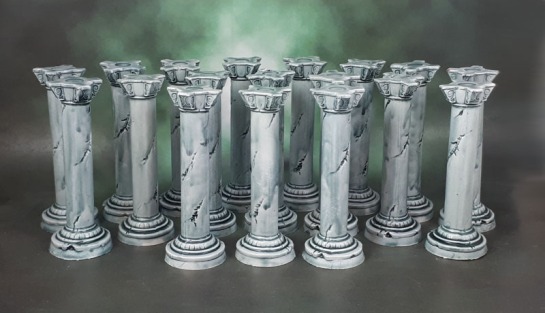 Starting off June’s models in truly underwhelming fashion today – with the set of pillars from the 2016 CMON Dungeon Crawler boardgame Massive Darkness. By all accounts, the game is supposed to be pretty decent, though I haven’t yet opened it to play it. Instead, I’ve finished off the pillars – to be used as pillars in whatever game I happen to be playing that needs pillars. Because pillars.

Paint was pretty straightforward, cleaned up, glued to round 25mm bases with a washed glued underneath to give them a little more stability. They were sprayed with the new GW “Grey Seer” and given a coat of thinned-down Gryph-Charger Grey Contrast paint in a bit of an experiment. With a satin varnish, the slightly-greenish hue and subtle tide marks give them a nice enough marble-ish effect, though a far cry from a “proper” marble look – they worked well enough as a Contrast Paint experiment. I decided not to dirty-up the bottoms of them, so that they can be used as either indoor or outdoor pillars.