Another Gale Force Nine/Battlefront terrain review today. It’s the Cratered Cobblestone Roads set, which I cracked open after writing up the Cobblestone Roads set the other day. How well does this set fare compared to the others? Well, there’s a bit more nuance required to decide if these are for you, so read on, Dear Reader…

I guess we start with the packaging. A polystyrene foam box greets us when we open the side. A little disappointing after the well-thought-out thick paper packaging of the Cobblestone Roads. Not a deal-breaker for me, and useful I guess if you need to make some molotov cocktails to deter invading Russian “peacekeepers”, but for the rest of us it’s a bit of unneeded landfill. 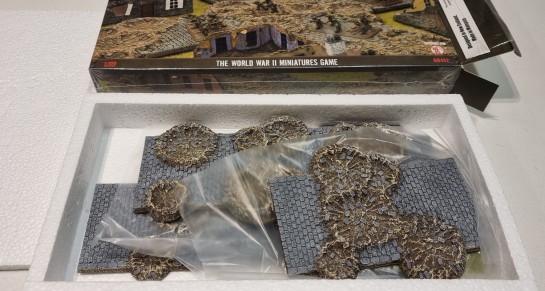 Inside the tray, the cratered road segments have slid all over the place. There’s some thin sheets of plastic “paper” between the layers to protect them from one another, but again, the tight paper parcel from the roads set would have prtected them better, as one of the craters in my box was pressed into the bottom of another road piece, leaving some of the paint on the underside – exactly what the thin bits of paper are supposed to protect from – except the contents obviously bounce around in transit. 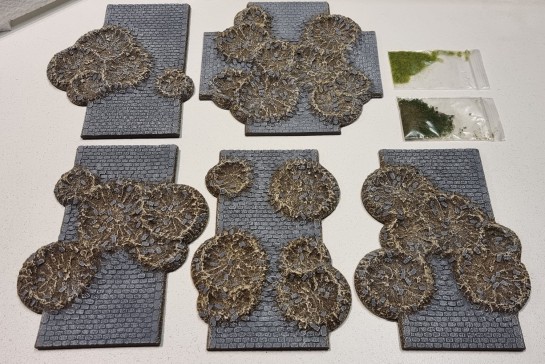 Unloading them from the Polystyrene tray, we see four cratered road segments, a cratered crossroads, and two tiny baggies of flock. They’re so small as to be next to useless to add to the roads – more of a sampler, or perhaps these little baggies of green provide a way for more creative people to  attempt to recoup the costs of the set…

Alright, a pretty decent bombed-out intersection is possible with this kit. Now let’s see how well it intersects with the other kit I just reviewed-

At this point, I think you can safely gauge both my surprise and disappointment. The two sets aren’t the same scale. Indeed, it appears that Gale Force Nine sells two very similar sets with nearly identical names “Cobblestone Roads” and “Wartorn Village – Cobblestone Road” that are in almost entirely different scales. I say “almost entirely” since they’re the same height. This, Dear Reader, is one of the reasons I’ve been writing these reviews. The advertising/marketing doesn’t really tell you, and most online reviews have had the products supplied for free by the manufacturer and tend to overlook small details like this. I certainly had no idea until I had them out together.

So what can you do? Well, if you’re being creative, you can create a section of terrain off the main road that’s been bombed or hit by artillery – as long as the damage has missed the main road… 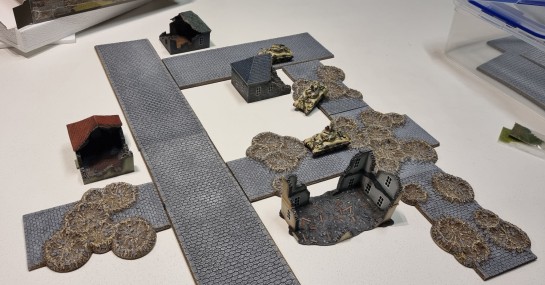 I’ve added in some of the buildings here. After seeing how it all looked in front of me, I declined to set it all up on a game may as it was all starting to look a bit uncomfortably familiar, given present events. 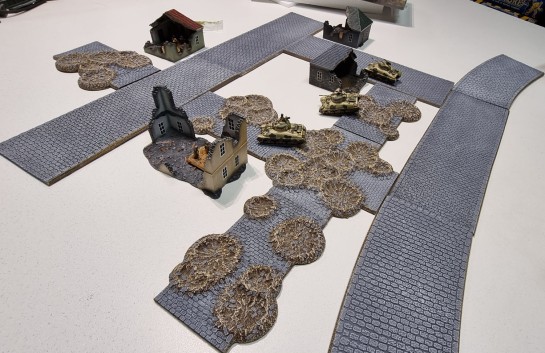 So certainly playable and workable with the “Wartorn Village” set, if you’re willing to have some flexibility, but nonetheless a very odd and disappointing choice from GF9 to not have all of their Cobblestone Road sets cross-compatible.

Given the intent of this review, which is to provide some images and simple thoughts on a set that I was unable to find any information on online aside from box pics, I’m not going to “score” the set. I purchased it myself from an online retailer and while the price of this set was reasonable, I’m still rather disappointed with this one due to the scale difference with their other Cobblestone Road set.

I did pick up two of these at the same time – mostly because the other sets in thsi range have been so hard to get hold of. I’m not sure I regret it exactly, but I’m certainly aware that I won’t be able to get the most from them until/unless I can get hold of a set or two of the correctly-scaled versions of their Cobblestone Roads. which for me means additional expense for what I’m sure would seem more like a footpath for 28/32mm models, since I really value versaility in usage very highly with terrain sets like these.

As always, with a small amount of effort this set of roads could be made to look a fair bit better – and again – I’m going to hold off until I’ve acquired all of the Cobblestone Roads I ever intend to buy so I can weather tham all at once.

I think the value for any reader would be directly proportional to how easily you can acquire the correctly sized undamaged roads.