After my slightly, then significantly lower than average output in January and February this year, March saw a return to something much more like the form I expect for myself in terms of the number of completed models.

Credit to both of the month’s community painting challenges that I took part in to help with my motivation. I’ve already discussed Swordmaster’s Monster March painting challenge. And I am so far behind in leaving comments that I still haven’t posted on Alex’ Fembruary challenge, let alone Swordmaster’s round-up post – and aplogies to both of those bloggers as well as everyone else who I’ve fallen behind in – including replying to those who are kind enough to leave comments here on my own posts!

My point is that regardless of my lack of being able to keep up with reading, commenting, replying or even (as you can see here) posting – I have still managed to keep painting which has been rather invaluable for me personally, and the challenges run by members of our wonderful little community have certainly helped to motivate me to get shit done and keep on painting – so thank you to you all!

Bascially everything in these photos, aside from the Nolzur’s Shambling Mound (which I forgot to remove for an extra pic) are my submissions for Ann’s “Neglected But Not Forgotten” painting challenge run through March. Well, technically, the Treeman, Iguana and Undead Flesh Golem are Marouda’s submissions, but I helped her with them, and I’m using that and the “couples clause” that I just invented to count those in the overall numbers for the monthly tally as well. Basically, I forgot to take pics of all the rest of them without her three, and then the rest of them without her three and also without the Shambling Mound. And all the models have now been put away to various places. There’s one thing I can do though….

Here’s Marouda’s Model trio, assuming that they count as neglected But Not Forgotten if one was given as a gift to paint over the 6 months ago, and the other two were owned by me more than 6 months ago yet pilfered by her to paint…

For a few other little pics, here’s the D&D models completed in March. I’ve kept her Treant and that Reaper Undead Golem thing out of this pic, going for more of a “pure” D&D set with these.

And here are the Zombie Apocalypse Survivors of March, all together. I think they’d probably be able to hold out well, except for the inevitable infighting…. perhaps that’s why four of them missed Fembruary?

Lastly, I’ll wrap with the Zombvivors. The unlucky survivors who were infected and turned…

Whups! Hit publish a second too soon. 45 figures for March (including the 3 Marouda’s Models. So adding those to the 43 from Jan-Feb brings the tally to 88 at the end of March. Not too bad and back on track. April has been productive so far as well, so I’ll be stacking up a few more multi-models posts in the next few.

….aaaaand that’s a wrap for March. Now onto April, where Ann once again has been running a painting challenge, this time the second annual “Paint the Crap You Already Own!” challenge. Which I like to think of as the “Slap Robin in the Face” challenge for some reason… 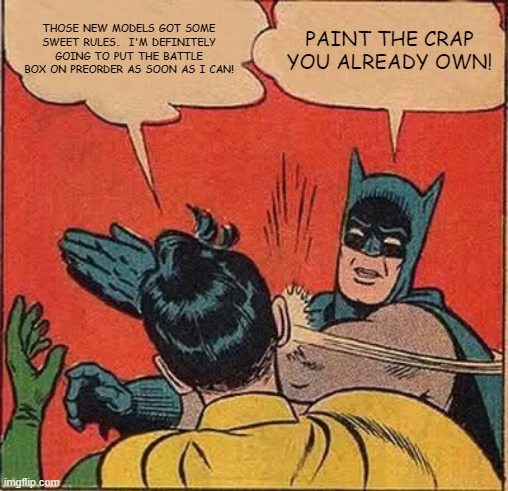 Oh, and someone in the Community – I’m thinking Roger? or perhaps Dave? – mentioned a challenge called Monster MAYhem that runs during (guess it!) May which I checked out at the time, but naturally I haven’t been able to find the link or post for the past couple of weeks… so I’m hoping the link can be reposted in the comments here? Pretty please? 😀

I managed to get a decent number of Zombie Survivor models painted in March, as part of Ann’s “Neglected But Not Forgotten” painting challenge. As with the previous set, I’d originally hoped to get these done in February so that the two ladies could be part of Alex’ Fembruary challenge. But hey – nothing wrong with keeping up the female models throughout the rest of the year, either! As with the other LNoE models, these are pretty small PVC sculpts with soft, simple details, but as you can see here – they do work well. I kept to the artwork/photographs of the characters as my colour guides once again. Amanda’s metallic mermaid dress gave me a chance to experiment with different Contrast Paints over a pre-shaded metallic base, and I’m quite happy with how it turned out. Red Fire Axe once again – because I see it as a location-based “break glass in case of fire” situation. I’m not sure why the diner cook has a chainsaw. Maybe best not to ask…?

This four gives me all of the models from the Growing Hunger set painted now, and a total of eight LNoE models painted in March. I do have more LnoE models to paint still, but all of my “ready to paint” ones are now done. I’ll have to choose the next batch, and get to cleaning them up to prime. I do have more Zombicide models ready to paint, and in fact, I have a couple more of those tomorrow for my final set of March models’ to post…