A pretty inconsequential update today. I haven’t spent much time online over the last week or so, as I’ve been making some changes to the War Room which involved a lot of cleanup and turfing old stuff, and a sizable donation of old hardware and software to a local retrogamers’ group. I’ll show the room changes off later on. Probably. This update is simply about documenting another unit completed for the monthly challenge – this one finished at the end of March (see, I’ve been slow at updating!)

I didn’t actually paint all of these guys this last month, but due to the rules of the painting challenge – it’s about completing units – which can be finishing off a whole unit of models that only need 2 more hours work on them, or (as in this case) painting two models needed to complete a unit where all of the mother models are already done.

I noticed yesterday while learning to play SAGA that I have another unit that only needs either two more spearmen or a command pair added to complete it as well. That one’s getting bumped to the front of the queue for April!

This guy is just here since he’s a repair and complete job, and I wanted to document him and forget about him. It’s either a Foundry or Warlord metal spear in place of his broken plastic one. I’ll sort him out into a unit later. Perhaps in the second half of 2016? I’ve got 12 or 13 sprues of Moria goblins to paint, plus a few metals – so reasonably achievable to complete with a concerted effort. Oh yeah. Plus trolls.

These models are very simple conversions. Simply Warriors of Minas Tirith models with the heads sawn off and replaced by metal heads from eBob miniatures – “Alternative heads for Knights” – or to those in the know – Not-Swan Knight heads. I originally bought a bunch of them years ago with the intent to replace the rather un-LotR heads on my various metal Swan Knights of Dol Amroth – both on Foot and Mounted. The actual GW models have these huge helms that look much more like they’d fit properly on Warhammer High Elves. With the passing of several years, and the passing of metal models, I’ve decided to leave the metals be, and simply use the eBob heads on a variety of other models to “Dol Amroth” them up. I had a little accident when sawing one of the WoMT heads off and took his bow with it, and simply could not find it to repair. I found another guy to replace him, and took his head off and caught him up to the rest of the gang.

I’d originally planned (again, years ago) to file off the white trees on the plastic WoMT breastplates and shields. I’ve decided to leave the breastplates be, as Dol Amroth is of course a Fiefdom of Gondor, so I’ll leave them on the breastplates but remove them from shields when I get to the swordsmen. Unlike the single units of troops and hero from Lossarnach and (yet to be painted) Lamedon, the Dol Amroth contingent will number a reasonable number of units. At least one each of Archers, Shield Wall, Spearmen plus Swan Knights mounted and on foot, plus of course Prince Imrahil. I may expand it further using more eBob heads on Perry Miniatures Foot Knight bodies, but I’ll worry about that once I’ve got all the official models painted. In fact, I’m using the first batch of heads I ordered from eBob, and having placed another order (literally 5 years to the day later) on Feb 5th this year, for 6 more sets of heads, a trio of spiders and the lovely “Lady Greensleeves” sculpt. I thought it reasonable just now, at the time of writing (March 6th) to send a followup email since I’ve not had anything arrive nor have I heard anything since placing my order. Usually stuff takes 1-2 weeks to arrive from the UK, with 3 weeks being for outlier cases. Hm….

UPDATE – I received the two word reply to my query on 8th March. “sent today”. So a month and three days after payment I had to prompt him to send my stuff. He even quoted the “your payment has been received” email from PayPal that reminds him to send product within 7 days. I guess caveat emptor applies here, and that’s the kind of shitty service we can expect from eBob. I might order a few more head sprues from him and make sure they get posted before I publish this post.

UPDATE II – I ordered a few more head sprues and followed up by immediately emailing him to say I expected that they’d be sent out a lot quicker than a month. He sent them the following day. I guess the lesson there is if you choose to order anything from him, email him within a few days to ensure that your stuff actually gets sent. 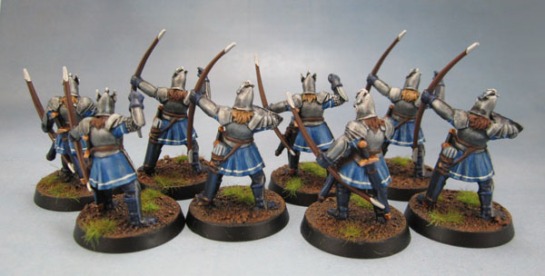 The paint scheme is the usual base metal – Army Painter Silver(?) (it’s an unlabelled metal paint from the first KoW KS), highlighted with VMA Steel. I then vary the usual by washing with a 1:1 mix of AP Dark Tone and Blue Tone wash to give a subtle Blue Steel look. 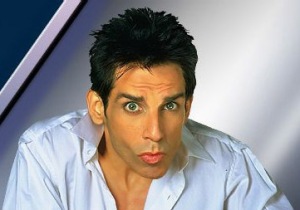 P3 Cygnar Blue Highlight as the base for the cloth parts, highlighted with P3 Arcane Blue and shaded with a wash of VMC Dark Prussian Blue (I think – the label is unmarked). Leather straps and Boots – and Leggings are painted as a dyed blue, so VMC Dark Prussian Blue with a touch of old-Citadel Ultramarine Blue for highlight, and slightly-thinned AP Dark Tone wash. And yes, I’ve written down all the paints here so I can easily replicate the scheme with later units. A lot of people paint their Dol Amroth models with white cloth and blue accents. I may do so for the SkoDA and other nobles, but for the common troops of Dol Amroth, I wanted their livery to be Blue with white accents, and the dark, almost black blue to tie in more strongly with their brethren from Minas Tirith as well as the blue to keep them close to their own noble-born elites. The swan crests on their helms were painted in VMA Steel and washed with thinned down AP Blue wash.

You can see just how well the eBob heads fit onto the plastic WoMT models.

So these eight make a small unit for SBG, that can simply use the WoMT profiles, and in KoW they make for a troop of Archers, again using the KoM profiles. I’ll use different statlines for some other Dol Amroth troops, but not these guys.

Edit – So after reorganising my KoW Gondor Archers from Regiments (“20” models – I use 12) to Troops (“10” models – I use 8) because there’s not much point in Regiments of Archers as both have 10 attacks and only a difference in Nerve, it transpired that I needed only 4 more archers to make another unit of Troops. I found a painted pair that I must have been using as war machine crew before I finished painting the war machine crewmen, so I went looking for 2 more models. I found one, and it turns out that the model I used to replace the broken one was my only other spare one. Just fantastic, eh?

In “Archer Troop” formation for Kings of War. I need to follow up on getting some custom MDF bases cut.

I did some more poking through my Gondor boxes and just found three more unclipped sprues. Or another 36 models. That gives me another 12 each of Archers, Swordsmen and Spearmen to paint, or another unit of each. I guess I can throw three archers into the spares box and finish that other unit now, unless I really want to have one regiment…

Now do I paint up these newbies as more Dol Amroth troops, or more Minas Tirith troops? I’ve got a unit or so worth of Arnor figures – which, yes, would be anachronistic outside of scenarios, but they can work for another fiefdom in Third Age games – should I paint a unit or three (ie, one of each WoMT type) in the green livery of Arnor? And does anyone know a cheap/easy source of “turbaned”/wrapped helms similar to the GW ones?

Helmets similar to these ones… (Image GW)

A final note – I wrote up most of this blog post as I was painting the figures 2 weeks ago. This was due to wanting to write down the colours and such as I went along, and also as I was discovering just how bloody long ago I ordered the additional heads from eBob. (43 days ago now). I painted the majority of the models in a single day 2 weeks ago, but due to lots of work and buying The Division, I didn’t complete them until yesterday. I took the photos and wrote up the last of the text today.